To steal the Ostlerheimer Diamond (failed).

Rough Diamond is a main antagonist of "Manehattan Mysteries" arc in My Little Pony: Friendship is Magic comic series. She is a notorious Manehattan thief who disguised herself as a police officer known as "Officer Fluffles", in order to steal the Ostlerheimer Diamond. Her cutie mark is a diamond.

In Manehattan, Applejack, Fluttershy, Rarity, Apple Bloom, and Babs Seed go to Carneighie Hall to watch Trixie's magic show. Suddenly, Manehattan police officers bursts into the auditorium. Trixie is revealed that she worked with Manehattan police to catch the notorious thief Rough Diamond, who was behind the city's jewel thefts. However, Trixie's act was a trap, and the diamond she used in the act was a fake with a magical tracking chip. Trixie tracks the fake diamond to Applejack's hat. Before the chief could suspect Applejack, they were alerted that the real Ostlerheimer Diamond is stolen where it was hidden. The police chief tracks the diamond into Trixie's hat and accuses her of theft. Trixie, along with Applejack and her friends, escaped from the police. Because of this, Applejack vowing to clear Trixie's name and catch Rough Diamond.

Applejack, Fluttershy, Rarity, Apple Bloom, Babs Seed, and Trixie were trying to find the clues, but they found the Forehood Pendant in the museum. After they cannot found clues in six stores, Babs comforts Trixie due to their respective bad actions. Applejack and Rarity founded three diamonds as a clue. When they asked the shopkeeper about the thief, he said that her cutie mark was diamond, which is their new clue to catch the thief. In Babs Seed's apartment, they plan to trap Rough Diamond at night. Later that night, Applejack and her friends sneak into the museum to caught Rough Diamond, but she threw the Smoke Bomb at them, prompting them to get them almost arrested. However, Babs Seed admitted that Trixie is the "thief", which is another plan to caught Rough Diamond red-handed and reveals that she is actually "Officer Fluffles" in disguise. Babs explained that she snuck in early and sabotaged Trixie's show and later, while everyone's distracted, she could have slipped the fake diamond under Applejack's hat. She did not have to cracked it, but she used the smoke bomb to make it looks like the diamond disappeared from the safe and placed it on Trixie's hat. Babs also reveals that Rough Diamond's cutie mark is appeared to be smudged, which she rubs the paint away and revealing a diamond cutie mark underneath. Due to her actions towards Trixie, she is arrested by Manehattan police. 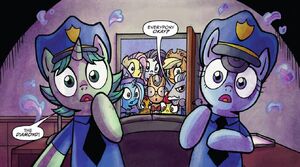 "Officer Fluffles" is shocked to see the diamond disappeared. 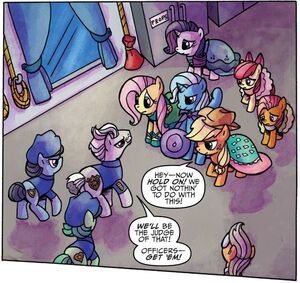 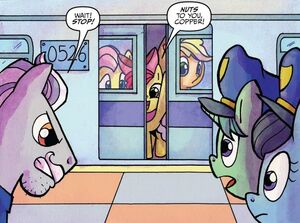 Rough Diamond throws a smoke bomb at the gang. 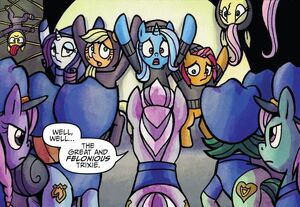 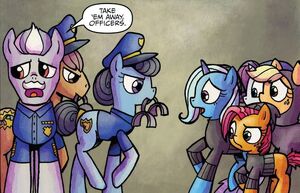 Manehattan chief officers ordered to arrest Trixie and the gang. 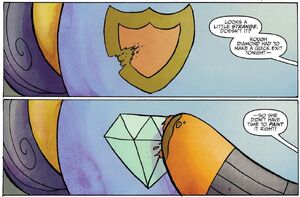 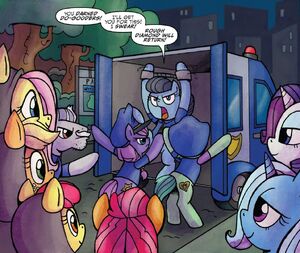 Rough Diamond is taken away by the officers for her crimes.
Add a photo to this gallery

Retrieved from "https://villains.fandom.com/wiki/Rough_Diamond?oldid=3668543"
Community content is available under CC-BY-SA unless otherwise noted.