Villains Wiki
Register
Don't have an account?
Sign In
Advertisement
in: Partners in Crime, Brutes, Abusers,
and 28 more

Scruff and Bumble (by Rouge)

Assist Dr. Starline and Dr. Eggman in their plans.
Get revenge against Sonic the Hedgehog.

Rough and Tumble are major antagonists in the IWD Sonic the Hedgehog comic series.

Meeting Sonic and Working for Starline

Late into the war between the Resistance and Eggman Empire, a village in charge of Wispon distribution came under attack by Badniks. Rough and Tumble soon came to the towns aid and ferociously cleared away the invaders, saving the village. The pair then claimed they wanted to improve the town's defences, so were given access to all the Wispons the grateful villagers had to offer, but they instead used the weapons to enslave the townsfolk. The villagers had no choice but to comply to the pair's demands as they had nothing to fight back with, and it remained that way until a month later when Sonic and Knuckles went to investigate.

The heroes soon learned of the towns predicament before confronting Rough and Tumble inside a warehouse. The villainous duo put up a bit of a fight, but after Rough was hammered through the floor by Knuckles, the mercs prepared to use the Wispons against their foes. Thinking quick, Sonic rallied the Wisps that powered the weapons and turned the tables on the mercs, who were unable to use the Wispons without the alien's assistance, before knocking them both out. Rough and Tumble were arrested for their crimes but swore they would break free and get their revenge.

During a battle for control of Angel Island, Rough and Tumble escaped their imprisonment and kidnapped the amnesiac Dr. Eggman on behalf of a mysterious client. They take the doctor to one of his bases where they meet their employer Dr. Starline and assist him in restoring Eggman's memories. Eggman (under the kindly persona of "Mr. Tinker") begs Rough and Tumble to let him go, but the mercs ignore his pleas as they strap him a device and watch as the doctor receives electric shocks by Starline. However the tortuous treatment was not enough to restore Eggman to his former self.

After a few more treatments, Rough begins to get frustrated with Dr. Starline and reminded him that their deal was to give him Eggman in exchange for weapons to use against Sonic the Hedgehog (although the mercenaries also attempt to downplay their reliance on them). Starline assures the brothers that they will get their rewards as soon as Eggman's lost memories resurface, and luckily for them it's not long before this occurs thanks to the arrival of Metal Sonic.

The duo were equipped with advanced weaponry and sent to terrorize Windmill Village (the village where Eggman was kidnapped from) in order to attract the attention of Sonic. However the hedgehog was unimpressed with their new tech and passed them off as a minor threat, being more concerned about finding Eggman. Infuriated, the pair attack while Sonic works with Tails to defeat them. Tumble tries to crush Sonic with his mechanical tail but it's soon destroyed using the titular windmill's blades while Rough uses his Vapor Condenser to launch large stink bombs at Tails only for the fox to throw one back at him. The skunks are soon defeated and were about to reveal who they were working for until a portal created by Dr. Starline's Warp Topaz opened up beneath them and warped the pair back to Eggman's base.

Still determined to win, Rough and Tumble try threatening Dr. Eggman into giving them new weapons or they will take control of his hideout. However Eggman decides to just give them what they want with the secret intent of using them to infect Sonic with his new Metal Virus. The brothers then are outfitted with backpacks full of the virus in case of emergency and are let loose to terrorize the hedgehog with a giant weaponize digger. They track Sonic and Amy Rose to Eggman’s old base at Echo Mine and drill through the walls of the mine to pursue them when they try to escape. However, the mercenaries soon lose their advantage when Sonic and Amy realise that the digger isn’t able to handle tight turns or confined spaces very well. After being lead into an area which was difficult for the digger to manoeuvre, Tumble tries to blast the heroes with a mounted turret, but Amy manages to stop him with her hammer while Sonic destroys the digger's wheels.

The villains bail from the digger as it falls into a nearby pit and then decide to activate their backpacks, believing they were backup weapons. Instead, Rough and Tumble become drenched in the Metal Virus which transforms them into robotic zombie-like drones that Sonic refers to as "Zombots". The mercenaries attempt to attack their enemies using their increased strength and instantly repair any damage done to their liquid metal bodies. Sonic and Amy were unable to find a way to defeat them in combat, so they knocked the Zombots down the same pit the digger fell into, although Sonic became infected with the Metal Virus in the process.

During an undetermined point in the series, Rough and Tumble (who are no longer Zombots) discover one of Dr. Eggman's abandoned pyramid bases in Dusty Desert. Rough was eager to explore the pyramid in hopes of finding treasure, but Tumble believed the base was abandoned for a reason and feared it could be cursed. Rough brushes off Tumble's concerns as the venture into the pyramid to find the lights still lit, which Rough uses to try and dispel his partners worries about the place. However, the teal skunk unintentionally triggers a trap which causes the walls to close in around them. Rough uses a spin dash to carry Tumble and himself to safety before getting a brief scare from Rouge the Bat, who was also looking for treasure. Determined to find the riches first, Rough emits a foul odor to stall Rouge while he and Tumble race deeper into the labyrinth, only to encounter a remote-controlled Egg-Golem. Rouge soon catches up with the pair and goes searching for the remote to deactivate it, while Rough and Tumble manage to disable the Egg-Golem themselves by destroy its head. Their victory encourages Tumble not to worry about their surroundings. But when Rouge reappears mummified in what she claims to be cursed bandages, it is Rough who becomes terrified and flees with his brother out of the pyramid.

Rough is the short teal skunk while Tumble is the tall cream one. Although they have been described as bullies, using threats to intimidate people and boss them around, the brothers are willing to stoop towards more villainous acts if pushed far enough or to achieve their goals. Rough and Tumble also seem quite arrogant due to their strength and like to showboat using a routine they've come up with. The duo are said to be not very smart and reluctant to admit when they aren't strong enough to handle themselves in a fight with their brute strength alone.

Tumble appears to be sensitive about his short tail and implied it once use to be bigger. After losing a long mechanical tail given to him by Dr. Eggman, he was very saddened to the point of tears.

Rough and Tumble are both strong capable fighters and can hold their own against the might of Sonic and Knuckles. Rough can also perform a technique called "Stink Bomber" in which he produces a fowl smelling odor while using a Spin Dash. 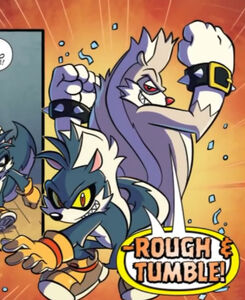 Rough and Tumble introducing themselves. 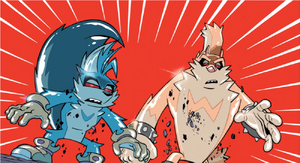 Rough and Tumble after being infected with the Metal Virus