Assassin
Rouki is a powerful wolf-themed Duke Org and a major antagonist from Hyakijuu Sentai Gaoranger.

Not much is known about Rouki's origins, except that he was the by-product of evil Org energy that was inside a cursed wolf mask. A millenia ago, after the defeat of Gao God at the hands of Hakkimaru, Shirogane use the wolf mask's power to invoke his Power Animals' combination into Gao Hunter to destroy the Org. Though he succeeds, wolf mask seized control of Shirogane's mind transforming him into Rouki. With what humanity he had left, Shirogane begged his allies to seal him in a stone coffin where he remained.

However, released by Ura 1,000 years later, Rouki lost all memory of being Shirogane with only the grudge against the Gaorangers being the only thing he remembers. Rouki proved able to fight the Gaorangers quite well, even using his own Power Animals as he adds GaoElephant, GaoGiraffe, GaoBear and GaoPolar to his collection. But as time went by, Rouki's past nature began revealing itself as he aid GaoWhite with her injuries and looked after a wolf/dog pup before driving it off. But as time of the full moon came, when his power is at its zenith, Ura implants a special grasshopper to modify Rouki's memory and willingly give the Gao Jewels to the Highness Duke. But the spirit of GaoGod the Gaorangers of Rouki's true identity, causing a lunar eclipse that allowed Shirogane to return to his original form as he reveals his story to the Gaorangers. But when Ura to keeps him from revealing the only way the curse can be broken long enough for the eclipse to subside, Shirogane pleas the Gaorangers to kill him before running off as he transforms back to Rouki. Luckily, Tetom managed to piece the curse's source is from Gao Hunter's formation and the Gaorangers use Gaoking Striker to defeat GaoHunter to break the curse with the Dark Mask destroyed.

However, the evil within the Dark Mask took a life of its own and transformed into Rouki with unfinished business with Shirogane because he was the evil's prison. Rouki battled Shirogane and almost succeeded in his killing him, but was eventually destroyed by the purified GaoHunter. But the act only made the evil search for a new vessel before it ended up inside Ura, as he planned from the beginning, who used his new powers until GaoIcarus destroyed the evil for good.

Rouki is one of the strongests Orgs, overpowering the Gaoranger with very little difficulty. In battle, he wields the Crescent Moon Blade that he uses to send out crescent shaped waves of energy and control his Power Animals. Rouki's powers wax and wane with the moon. Rouki can also grow himself and other Orgs to giant size with his Wolf Seeds.

Rouki being sealed by the five guardians. 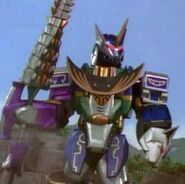