Placing bets on the best fighters in Meta-Brawl.

Running her casino.
Enjoys being rich.

Continue running The House casino and the Meta-Brawl.

Roulette is a supervillainess in the DC comics and the conniving entrepreneur who ran an illegal no-halt cage fighting league known as the Meta-Brawl.

Roulette's grandmother was a Golden Age villain of the same name, who ran a conventional casino and fought Mister Terrific (Terry Sloane). The current Roulette believed Terry Sloane to be her grandfather, but it was indicated that her grandfather was actually Terry’s brother Ned.

Both Roulette and Ned have been added into Mr. Terrific's history, and do not appear in the original stories. Having encountered the second Mister Terrific during one of her schemes, she has come to view him as an unworthy successor to Sloane.

Her casino ("The House") is a superhuman gladiatorial arena, capturing heroes with teleporter technology similar to Holt's T-Spheres, and pitting them against each other, while various supervillains bet on the outcome.

In her debut, she captured most of the current Justice Society and forced them to fight each other; Mr. Terrific and Dr. Mid-Nite were forced to play a chess game where the loser would be electrocuted.

Sand and Hawkman had to reach Hawkgirl while infected with a fast-acting lethal virus (of which Kendra had enough of the cure for one) while Black Adam clashed with Atom Smasher.

However, all managed to escape their traps; Black Adam and Atom Smasher's fight lasted so long that the mind-controlling drugs used on them to heighten their hostility towards each other wore off, Sand remained in his earth form to slow the spread of the virus until another cure could be found by Dr. Mid-Nite, and Mr. Terrific.

Dr. Mid-Nite managed to reach a draw in their chess game, destroying the electronic board while the game re-set itself. Roulette teleported them away before they could capture her, however.

A wall of fallen heroes was the only indication of the many DC Comics heroes who had been killed in battle in "The House." The names include Firebrand, Impala, Maxi-Man, Ram of the New Guardians, Flyboy and the Hybrid (minus Pteradon).

Roulette and the House reappear in Formerly Known As The Justice League, in which she captures the Super Buddies. The subliminal programming which prevented heroes escaping fails to work on Fire because her native language is Portuguese, and she releases the others.

When this is followed by Mary Marvel shorting out her aggressor chip due to extreme stress, Roulette decides they have won and orders them teleported away.

She has appeared in JSA Classified (#19, Jan 2007). Dr. Mid-Nite had infiltrated her current fight club location in search of information regarding purported organ-napping. She agreed to give him information only if he beat her bodyguard in a game of arm wrestling.

He did so, using his knowledge of nerves and their debilitation, and though she felt he had "cheated" she gave him the name of a model who had surgically implanted wings. After Dr. Mid-Nite left, she called the owner of the surgical clinic, who later proved to be Delores Winters, and told her of the hero's investigation into the implants and operations.

Roulette also appears in The Brave and the Bold #1 (2007), with Firebug's gauntlets, attempting to destroy the fabled Book of Destiny, until an alien villain with a probability-based weapon steals it from her; it transpires she had been dating the thief of the book, and that she had read the book.

This took a serious blow to her sanity, as she saw too much of the future to withstand the information.

In the Justice League of America vol. 2 , #35 (September 2009) story Royal Pain, Roulette has a game going with Amos Fortune. They each play with cards that represent the JLA and the Royal Flush Gang; in turn, they each bet that one can beat the other, respectively.

Eventually, though, it is revealed that Roulette was merely gathering data on the JLA, Fortune and his Gang. She is shown to be working — perhaps against her will—under the Key, and his as-yet-unknown master.

Roulette has no apparent superhuman abilities, but is a genius when calculating odds and gambling winnings. Roulette has robot security dogs (designed like the guard dogs of Apokolips), automated security devices, a series of death traps, and at least one metahuman on staff who can negate super-powers.

The pins she uses to tie her hair up in a bun also doubles as daggers for close combat.

The fight ring highlighted the distrust of metahumans by civilians, as evidenced by the many paying spectators who cheered non-metas like Wildcat on and execrated the metahumans. Green Arrow and Black Canary directly confronted Roulette's Meta-Brawl (beginning a relationship in the process). They were forced to battle other participants of Meta-Brawl including Sportsmaster, Bloodsport, Electrocutioner, Atomic Skull, Hellgrammite, Tracer, Evil Star, and Amygdala.

In the episode "Grudge Match," Roulette overhauled the premise of Meta-Brawl in the face of falling profits. She utilized Lex Luthor's Secret Society (along with the assistance of Sonar) to use mind-control technology in order to brainwash female Leaguers (including Vixen, Fire, Hawkgirl, Wonder Woman, and Black Canary). This way, Roulette can create the re-imagined "Glamour Slam". This tournament was destroyed and the heroines rescued by a team-up between the resuscitated Canary and Huntress (in itself a first, as Huntress and Canary had been in opposition since their violent altercation seasons earlier). Roulette and Sonar are arrested at the episode's conclusion.

In one of the final tests, Roulette dresses up a bound and gagged Lois Lane in her trademark red qipao, almost causing Oliver to kill Lois on sight. Unlike the Caucasian comic book version, this Roulette is an Asian mercenary and actress who completes whatever assignment she is paid for. However, she notably threatened Lois on her own initiative. She then reappears in the episode "Prophecy" (season 10) and is part of Marionette Ventures where she is assigned by Toyman to kill Tess Mercer. 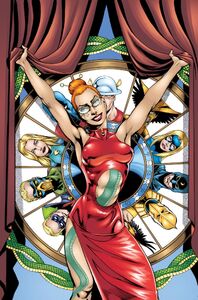 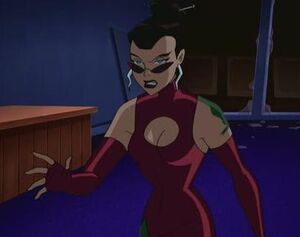 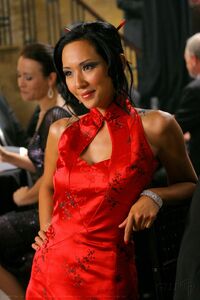 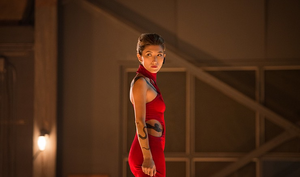