The Duke of Puzzles

Rouxls makes his first appearance before the Lightners make it to Card Castle, at which point they encounter puzzles in the Forest that have been vandalized by Rouxls Kaard. Rouxls himself, however, does not appear in person, and only his initials can be found.

The Lightners meet Rouxls in person when they proceed to the third floor of the Card Castle. Rouxls attempts to thwart the Lightners with an incredibly easy puzzle, which involves pushing a box to the left a single time. When his puzzle is solved, Rouxls angrily exclaims "GOD. DAMN IT." and flees to the fourth floor of Card Castle.

Once the Lightners catch up with Rouxls on the fourth floor, Rouxls tries to stop them again with another poorly-designed puzzle. This time, all the Lightners have to do is push the box to the left, twice this time. Once his puzzle is thwarted, Rouxls claims to have a better puzzle. When Rouxls is asked if the Lightners can see his puzzle, he, once again, retreats further into the Card Castle.

Upon reaching the fifth floor, the Lightners can enter Rouxls Kaard's shop, where he sells items and has conversations to the party. When asked about why he set up shop, Rouxls says that he's trying to acquire money to defeat the Lightners.

After the Lightners continue their advance towards the King of Spades, Rouxls Kaard intervenes them for the last time, and sends out K. Round, a giant checker piece with black, human legs. Rouxls placed a device called a "control crown" on the K. Round, so that it would attack the Lightners. After K. Round is defeated, Rouxls belts out a platitude to the Lightners about how his antics were just a "friendly test of their abilities", before he cowardly flees from the party.

When Kris and Susie go back to the light world to do their homework, Rouxls and Lancer join them to help. However, when Kris and Susie return to the Dark World from the library's computer lab, Rouxls leaves the party to an unknown location.

Eventually, Rouxls reveals to have sided with Queen and stand against the heroes again using their scrapped doom machine, playing Kris and Ralsei at a game. Regardless of whether the game ends with the heroes winning, Rouxls winning, or a tie, Rouxls will attempt to fire one last attack at them, only to turn to stone from the neck down due to being incompatible with the dark realm that he is currently in. As Kris and Ralsei leave, he asks if they are really going to just leave him there.

Eventually, Rouxls is brought in to help the heroes against Queen by giving them their machine to create a giant robot to counter Queen's. He eventually makes it back along with everybody else to the home base.

Alternatively, in the weird route, it is revealed that Rouxls has completely turned to stone before the heroes arrive at Queen's mansion. He is now blocking the café, trapping everyone in it inside.

Rouxls Kaard appears to be a tall humanoid figure that is entirely blue. Rouxls wears a navy blue royal suit with white buttons and markings. He has long, white hair, and black eyes. When the party finds Rouxls in his shop, his body is colored entirely black, with the exception of his mouth, when it is open.

Rouxls is very arrogant, and believes that he is the best puzzlesmith ever. Despite what he'd want you to believe, he is utterly inept at designing puzzles. The puzzles that Rouxls is involved with that actually are somewhat challenging, are puzzles that he vandalized to "make them harder". He also repeatedly refers to the party as "worms".

Rouxls is often seen incorrectly using Old-English in his dialogue. Rouxls's speech is littered with words such as "thou", "thoust", "thy", and the "-eth" and "-est" suffixes. Whenever Rouxls Kaard is surprised or angry, he will abandon his Old English.

Rouxls Kaard is shown to be quite cowardly, as he flees from the Lightners on multiple occassions, and he never fights them. In the Pacifist ending, Rouxls offers to give Susie a plate of worms for her to stay silent about Rouxls trying to kill her and the other Lightners.

Under the arrogance and faux-sophisticated prose of Rouxls Kaard, seems to be a good-hearted individual. If you talk to Rouxls about Lancer, Rouxls will throw a hissyfit over being forced to babysit him, and he will tell you how irritated he gets whenever Lancer calls him "lesser dad" or whenever Lancer forces him to listen to his MP3s. After his tirade, Rouxls will ask how Lancer is doing anyways, showing he really does care about him.

Rouxls Kaard seems to have a mixed opinion about the King. Rouxls calls him a "cruel and terrifying monarcke!", and during the pacifist ending, calls him a "tyrant". However, Rouxls deems him a "benevolent ruler" for appointing him as the Duke of Puzzles. The changes of opinion regarding the King are a possible result of Rouxls's traitorous nature, as he switches sides with the Lightners after the mind-controlled K. Round is defeated.

Rouxls' opinion on Lancer can only be heard if you talk to him in his shop. Rouxls claims that Lancer is "more troublesome than a fistful of fleas", and calls him a "little water beetle". Rouxls' initial complaining about Lancer comes from his anger about the things he and Lancer do together while Rouxls is babysitting him. Lancer calls Rouxls "Lesser Dad", and forces him to listen to his MP3's, which are just cartoon splat sounds. After his rant, Rouxls will ask how Lancer is doing, hinting that he really does care about him. While Rouxls Kaard's opinions on the King are sporadic, he seems to genuinely care about Lancer. 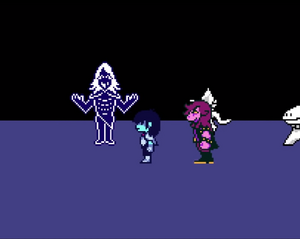 Rouxls during the "pacifist" ending. 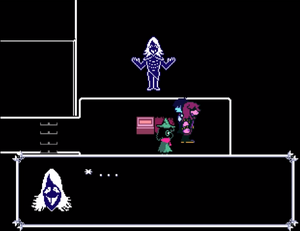 Rouxls' reaction to his first puzzle being solved. 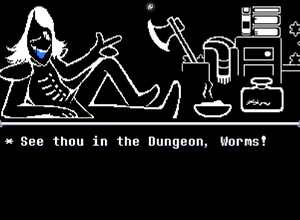 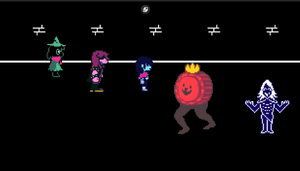