Indulging in his power.

Maintain his rule over Turgistan.

Tyrannical Dictator
Rovach Alimov is the main antagonist of the 2019 Netflix action film 6 Underground. He is the cruel, tyrannical dictator of Turgistan, whose extensive oppression and human rights violations make him the target of a shadowy, resourceful vigilante team.

He was portrayed by Lior Raz.

Rovach and his brother Murat were the sons of former President of Turgistan. When their father died Rovach took over the reigns of Turgistan. Alimov has been the totalitarian leader of Turgistan for at least four years. His regime's atrocities (for example launching gas attacks on his own people) which caused a massive humanitarian refugee crisis, are observed by an enigmatic billionaire known as "One", who fakes his death and forms a team of anonymous vigilantes dedicated to punishing evil figures who have evaded punitive action. They assassinate a Turgistani military lawyer in Florence, but their driver, "Six", is killed in a chase. He is replaced by traumatized U.S. Army sniper Blaine, given the designation "Seven", and he joins them as they kill four of Alimov's top generals in Las Vegas. Rovach accuses the next in line generals of plotting their four superiors' deaths and has them executed by throwing them off a building.

When the ghosts rescue Rovach's democratic brother, Murat, from imprisonment in Hong Kong, they proceed to hack Turgistan's state-run propaganda channel with a speech from Murat, encouraging the country's people to rise up in his support. Strategic explosives then force Rovach to escape his palace, ordering his convoy to drive straight though crowds of protesting citizens, and flee to his private yacht. The team follows him and fights their way past security forces (with the help of a magnetic pulse weapon), but before they can get to Rovach, One chooses to save Four, their parkour runner, from a soldier, allowing Alimov to escape via helicopter.

However, the ghosts are revealed to have infiltrated the helicopter, and they drop Alimov off at Turgistan's border, where he is chased and beaten to death by refugees he once oppressed. Murat then becomes the new president of Turgistan. 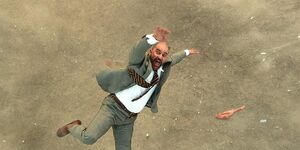