Occultist (after being bullied)
Scientist

Obsessing over the supernatural.
Expressing his hatred of humanity.

Unleash countless ghosts into the world of the living (succeeded).

Kill the Ghostbusters.
Lead an army of ghosts and destroy the world (both failed).

Rowan North is the main antagonist of the 2016 reboot of Ghostbusters.

He is an occultist and former Mercado Hotel employee who is obsessed with the supernatural as well as his hatred towards humanity, in large part, aimed towards those who mistreated him throughout his personal life. Seeking to achieve revenge and respect by bringing about a series of catastrophic paranormal activities on a mass scale, which he strangely calls the "Fourth Cataclysm" via his occult machine which connects the ley lines within the New York area to the Mercado Hotel at the Time Square district and breaking down the barrier between worlds.

He was mainly portrayed and voiced by Neil Casey, but also portrayed by Melissa McCarthy and Chris Hemsworth when possessing Abby and Kevin respectively.

Later, the Ghostbusters are informed that another ghost was released at a live music avenue, unbeknownst to them, which is released by Rowan North, the janitor who worked at Mercado Hotel, via an occult device he planted there. The Ghostbusters captured the ghost successfully in front of hundreds of people, and indirectly, foiled Rowan's plan. Rowan congratulated the Ghostbusters vengefully and planned to release another ghost for the Ghostbusters. He recalled back during his early life, he was bullied by a lot of people and he wanted to get his respect as well as revenge against people who treated him like a dog by planning an apocalypse, with his own occult devices and mirrors full of mad spirits including those who are like Rowan North as he described, miserable souls who have been cast aside and mistreated by human society in life, and they see the world as if it were nothing but garbage.

The Ghostbusters found out Rowan has planted several devices along the leylines which intersects at Mercado Hotel and at Times Square, which is a site with a history of paranormal event. The Ghostbusters go to Mercado Hotel to seek for Rowan, who are informed by the receptionist of the hotel he is in the basement. They go to the hotel basement and find Rowan there, along with occult machines and haunted mirrors which are full of ghosts. Rowan admitted to the Ghostbusters he was the one who is responsible for releasing the ghosts in the subway line and the live music avenue, and also he wanted to get revenge against people who treated him like dirt. Against Abby's pleads, he proceeded to deliberately commit suicide by electrocuting himself to death rather than being caught after he finished his words, before Holtzmann turned off his main contraption. Soon the police arrived, carried away Rowan's lifeless corpse and sealed the hotel basement with police cordons.

At home, Erin unwittingly discovered Rowan North's true intention when she studied her own published occult book with Abby and a few pages in her book containing eerie drawings of Rowan and his dangerous plan. It was a part of the plan for Rowan to get himself electrocuted, in order to come back as a powerful ghost and lead the ghosts to launch the apocalypse. Erin was concerned and attempted to contact Abby, but to no avail. Erin rushed to their places to warn Abby about Rowan's whole plan. Meanwhile, Abby was possessed by Rowan and she attempted to throw Holtzmann out of the window to her death, but is swiftly stopped by Patty, forcing Rowan emerging from Abby's body, and possessed Kevin.

With Kevin's body, Rowan goes back to his basement by motorcycle, knocks the two on-duty police unconscious, reactivates his devices and releases hundreds of ghosts. Soon the police and DHS arrive to the hotel and are subdued when trying to stop Rowan. With the city full of ghosts, the Ghostbusters fight through their way to get to Rowan. After a brief conversation between the Ghostbusters and Rowan, he set Kevin free by unpossessing him, making Kevin almost fall to his death, but Kevin is saved by the Ghostbusters.

Patty demands Rowan to go into something cute, and Rowan takes the form of their logo, grows enormous, starts to destroy the city and attempts to kill the Ghostbusters. The Ghostbusters realize the only way to defeat Rowan is to cause a total protonic reversal, which sends back the ghosts to their own dimension. But to do this, they have to use the Ecto-1's nuclear reactor device, which is on their car. They stop the car with their photon containment laser, in which they create obstacles to the ghosts which are driving their car around and send the car into the portal, in which the plan works, absorbing multiple ghosts back into the portal, as well as Rowan himself, but Rowan holds himself back to prevent getting absorbed into the portal. In order to let Rowan lose his grips, they attack Rowan with their photon laser gun and send him into the ghost dimension, before Abby pushes Erin away and gets taken by Rowan into the portal.

Erin jumps into the portal and saves Abby from Rowan by shooting Rowan's hand, sending Rowan to the ghost dimension in the process and getting themselves back to the mortal world.

In his human form, Rowan North is a tall, little bit chubby and brown haired person.

In his spirit form, Rowan at first looks like a spectral version of his mortal self engulfed with a blue aura like typical ghosts, but is later revealed to possess the ability to shapeshift. His spirit form of choice is a chubby pale ghost with glowing eye sockets, fangs, and a red bow tie on his neck.

Due to his machines that combines occult and science to empowered ghosts, Rowan, whom returned as ghost, eventually gained untold amount of supernatural abilities: 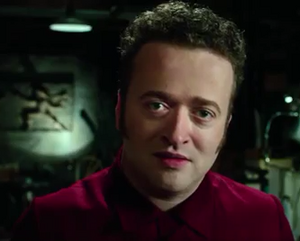 Rowan North purposefully killed himself as part of his diabolical plan. 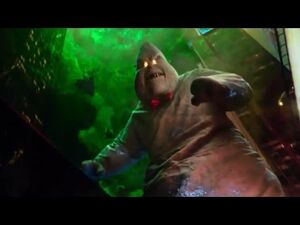 Rowan chasing after the Ghostbusters. 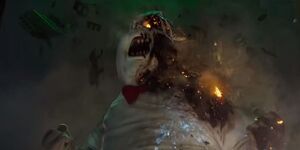