Ninja
Member of the League of Evil Exes

She is a member of the League of Evil Exes, being the only lesbian/woman ever dated by Ramona Flowers during a "bi-curious" phase.

In the movie, she was portrayed by Mae Whitman.

Roxanne is crazy and always irritated, but this is due to a huge inferiority complex because of her half-ninja state. She also gained the complex when Ramona stated their relationship was "just a phase".

Ramona's former roommate at the University of Carolina in the Sky, she was, according to Ramona herself, just a phase she went through (referred to as a "sexy phase" by titular character Scott Pilgrim). She broke up with her after leaving college and lost contact for some time.

In the comics, Roxie tries to attack Scott during his return from work. He punches her in the breast, much to her disgust and his chagrin (he doesn't like fighting girls), causing her to leave. He meets Ramona at a restaurant talking to Roxie, where he learns that she is the next ex he must fight, but Ramona fights her instead as Scott claims he doesn't have a sword. She chases both into subspace and attacks Scott in his dreams, but he wakes up before she can finish him. After escaping Knives Chau's father and tricking him into fighting Roxie, they run into the backyard and Scott finally decides to man up and gains the "Power of Love" sword, which he uses to literally slice Roxie in half, where she bursts into a cascade of woodland creatures.

In the movie, Roxy assaults Scott before his fight with Todd Ingram, claiming that they will meet again. After Todd's defeat, Ramona takes Scott to a night club called "4" as he complains about fighting the exes. At the bar, Roxy attacks Scott again, but Ramona fights for him when he refuses to fight against her. However, she throws Ramona's hammer out of the club, forcing Ramona to use Scott's body as a shield. But she kicks Ramona away and pins Scott to the ground. When she is about to deal the final blow, Ramona tells Scott to touch the back of her knee, causing her to fall to the floor and orgasm until she bursts in 4000 points and coins.

In all adaptions, after being defeated, she respawns back at her home, having learned her lesson.

Roxy is fought at the end of World 4. She is fought at a speeding bus, but escapes by slicing through with her whip-sword and running through a nearby neighborhood and into a garden. Being the quickest boss in the game, the player must dodge her attacks constantly and wait for an opportunity to strike her. When defeated, she will split in half and explode in small animals. Collecting them will give some money to Scott, each animal being worth $24.95.

Her skills include vanishing and enhanced agility, but what marks Roxanne so much is the whip-sword she uses as a belt, always waiting to be used. 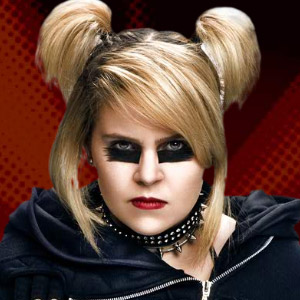 Roxie in the video game.