Cartoonist, founder and owner of Familyland

Roy Family is a legendary cartoonist who was the founder and former owner of his beloved namesake theme park known as Familyland in the 1980s. He is the eponymous main antagonist of the episode "Familyland" of American Dad!.

After faking his death, he was cryogenically frozen and placed where he could see what his park would become for the past three decades. When he is thawed out in "Familyland", he turns his park into a trap after he sees people that don't meet with his approval such as overweight and interracial families and selfish kids. The Smiths are caught while visiting the park and end up becoming kings of their own favorite areas with like-minded survivors. When Francine and Klaus, who have remained neutral, wander around the park and accidentally discover his secret lair, Roy announces that the survivors of a battle between all of the park lands will be allowed to leave, although he later tells Francine that he intends to renege on the deal, finding Francine the sole person worthy of his dream.

As the armies gather, Roy takes Francine to his private apartment where he leaves her to his kitchen while he watches the battle. As the armies meet in combat, Francine is forced to keep house for Roy. She hatches a plot to blow fresh-baked cookies into the park which makes everyone pause and remember their home life. They burst into the control room and confront Roy who applauds their togetherness and gives them lifetime passes. Roy goes back into cold storage, although a sudden cramp from having to go to the restroom leaves him on an odd pose. 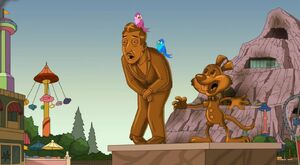 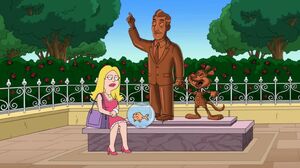 Francine and Klaus next to Roy Family's statue form 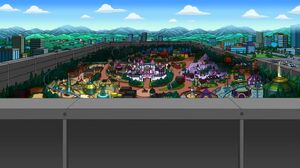 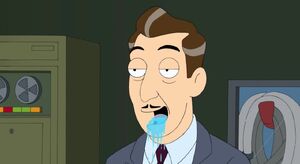 Retrieved from "https://villains.fandom.com/wiki/Roy_Family?oldid=3774258"
Community content is available under CC-BY-SA unless otherwise noted.