Prior to Far Cry 4 (Royal Guard)

When Pagan Min had arrived in Kyrat (Royal Army)


Keep Kyrat in check (succeeded for a time).
Eradicate the golden Path. (failed).

It had a elite branch, called Royal Guard, which are stationed as the armed forces in Northern Kyrat. They are headed by Pagan Min's Chief Governors Yuma Lau, who had come to Kyrat with Min from Hong Kong.

During the campaign of Far Cry 4, the royal army was in conflict with Golden Path, the Kyrati resistance army led by Amita and Sabal, who were after Paul De Pleur, the governor of the south. They carried out all the works for Min, which included drug producing and slavery.

Despite the army were said to be loyal to Min, according to some of the soldiers' conversations, they were actually willing to join Golden Path, but that never happens.

During the Far Cry 4: Valley of the Yetis, a splinter group of the Royal Guard had broken off from the main forces in Kyrat after they and their leader Master Sandesh had pledged to protect the Relic of Yulung from any outsiders that were to enter the secret Valley. 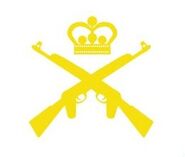 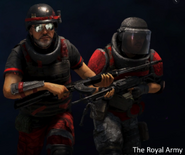 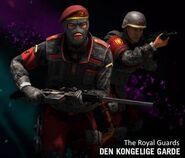