Las Vegas, Atlantic City and most major cities in the United States

Legacy Criminals
The Royal Flush Gang is a group of villains is DC comics who base their costumes and names off of playing cards. They have fought the Justice League, as well as individual members such as Batman. In the comics, they were formed together by Amos Fortune.

They are a group of playing card-themed supervillains who are usually thwarted by the superheroes they encounter. Their code names based on a royal flush in poker: King, Queen, Jack, Ten and Ace.

The original Royal Flush Gang was Professor Amos Fortune's childhood gang. With Fortune himself as Ace, they fought the Justice League on two occasions, using Fortune's luck-altering "stellaration" technology to realize the fortune-telling significance of playing cards. After Fortune abandoned the Gang, they attempted to steal paintings containing clues to a hidden treasure but were thwarted by the Joker's manipulations. Most of them then abandoned their criminal careers, although Jack briefly joined the Secret Society of Super Villains as "Hi-Jack". Fortune's gang wore costumes based on the suit of clubs. In the pages of JLA Classified, it was revealed the original Royal Flush Gang (sans Amos Fortune) reunited to fight the "Detroit Era" Justice League and their successors in the second gang. In this battle, the original King, Queen and Ten were all killed.

The second Royal Flush Gang was set up by Green Lantern villain Hector Hammond in Justice League of America #203. Hammond led the group as "Wildcard". This version wore costumes based on the suit of spades. The gang split up and went on to have separate criminal careers before re-establishing themselves, without Hammond. They were twice hired by Maxwell Lord as part of his manipulation of Justice League International. Later, they were reorganized and reoutfitted by a successor to the Golden Age Green Lantern villain the Gambler masquerading as the Joker.

Recently, in Infinite Crisis #2, the Joker tortures and kills the leadership of a local cell of the Royal Flush Gang from an unspecified city, after being rejected by the Society for his "instability". The King is the last one left alive and he mocks the Joker for being rejected. He kills the King with an electrical blast to the face. The dead gang is left in the ruins of a casino. However, given the fact that King is immortal, to the point that he has recovered from death almost instantly on numerous occasions, it seems improbable that he actually permanently died. 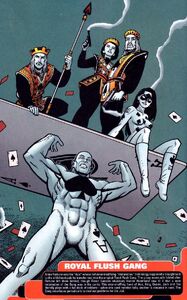 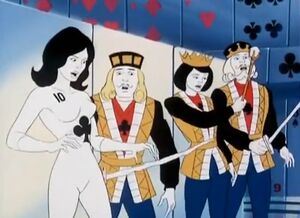 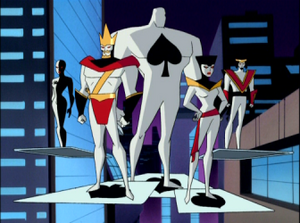 Royal Flush Gang in Batman Beyond 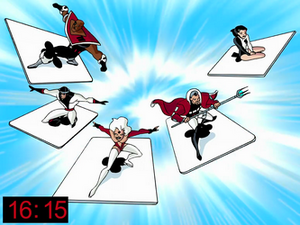 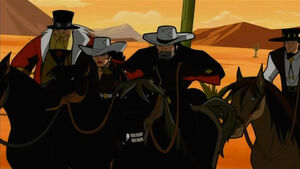 Royal Flush Gang in Batman: The Brave and the Bold 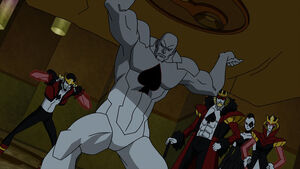 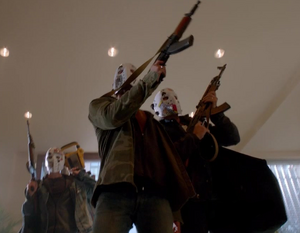 Royal Flush Gang in Arrow
Add a photo to this gallery

Retrieved from "https://villains.fandom.com/wiki/Royal_Flush_Gang?oldid=3679177"
Community content is available under CC-BY-SA unless otherwise noted.