The Royal Procession, also known as the Imperial Firebenders, are an antagonistic faction in Avatar The Last Airbender: The Avatar State. They are a militaristic unit of elite firebenders who served the Fire Lord and the Royal Family as personal soldiers and guards and remained silent while on duty.

Iroh was seen with two Imperial Firebenders at his side while writing a letter during the Siege of Ba Sing Se.

While out to capture her brother and uncle, Azula was accompanied by at least thirty of these soldiers in her ship. After learning they were planned to be taken as captives, Iroh and Zuko bested the soldiers. On by Lo and Li's advice, Azula left the group to join a smaller yet stronger group, setting off to order Mai and Ty Lee to join.

On the Day of the Black Sun, they were with Ozai in his secret bunker to serve as protection if a enemy got in his area. Due to them being without power, they prepared to use spears.

The Royal Procession was briefly seen at the coronation of Phoenix King Ozai, holding up banners for their ruler.

Before her coronation, Azula became very paranoid, so she exiled all of her troops, including the Royal Procession. They were also seen as members of a group of airships, destroying a large area of Wulong Forest and defending the fleet from any attackers.

Members of the group wear helmets with three spires on the top, three eye slits, and shard-like mouth slits. Captains of said group use the same helm, barring the mask. When Ozai was claimed Phoenix King, the guards there had their armor color flipped, having a more black design with red highlights. 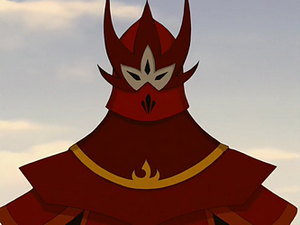