Seduce rich men and marry them

Greedy Femme Fatale
Rubí Pérez Ochoa Ferrer is the titular main protagonist villain of the Mexican telenovela Rubi and Rubí, la Descarada/Rubí the Brazen, both being based on a short story by Yolanda Vargas Dulché, published as a serial on the 1960s Mexican comic book Lágrimas, Risas y Amor/Tears, Laughter and Love, which has also been performed twice in 1968 by Fanny Cano and in a 1970 film version with Iranian actress Irán Eory.

An ambitious fatal woman who will do everything to make money and get out of her poor life, even betraying her loved ones.

She was famously portrayed by Barbara Mori (who also portrayed her niece Fernanda in her adult years). In the 2020 reboot, she was portrayed by Camila Sodi.

Rubí Pérez is a very beautiful but poor woman who is only interested in money due to her family's economic struggles since Rubi's father died. She studies at an exclusive university thanks to the financial support from Cristina, her hard-working older sister. Rubí hopes to become rich by befriending rich people. She is best friends with Maribel de la Fuente, a kind and wealthy young woman. Maribel has a small defect in her leg, which prevents her from having a normal social life. Rubí is actually jealous of Maribel's social status.

Rubí meets Maribel's boyfriend Héctor Ferrer, an architect, and his best friend Alejandro Cárdenas, a doctor. Héctor intrigues her because she knows he is very rich, and marrying a rich man has always been her ambition to leave poverty behind. However, she finds herself falling in love with Alejandro, believing him to be rich like Héctor. Héctor and Maribel get engaged. Rubí starts dating Alejandro, but when she finds out that he is from a middle-class background and is not rich, she dumps him, though it breaks her heart. Rubi's mother tries to make Rubi see that money is not everything and that she will regret leaving Alejandro, but Rubi refuses to listen and then sets out to seduce Héctor by having Maribel to get her a job in his office.

Héctor quickly falls under Rubí's spell. On Héctor and Maribel's wedding day, Héctor leaves a devastated Maribel at the altar and elopes with Rubí instead to Cancun where they soon get married. Rubí finally has the lifestyle and money that she has always dreamed of. On her wedding night Hector tries to make love to Rubi, Rubi keeps thinking about Alejandro, which makes her run out to the beach crying. Despite this, she is still in love with Alejandro, though he vows to her that he would never forgive her for what she did to Maribel. Hector was supposed to move to New York and work on an important project, but is kicked out after he dumps Maribel at the altar.

Rubi soon meets a tycoon named Yago Pietrasanta who is a womanizer, and quickly starts going out with him despite her being still married to Héctor and also her mother and Alejandro's objections. Rubi also gets envious of Cristina's happiness because of her relationship with Maribel's ex-chaffeur Cayetano and to separate them, Rubi frames him of theft by slipping on him a priceless jewel, sending him to jail days before his wedding with Cristina. However Cristina finds that she's pregnant and tells her mother about it, who goes with Rubi to ask for her help to release Cayetano from jail, but there Rubi tells her mother that she sent Cayetano to jail, and a disappointed Refugio tells Rubi that she's ashamed of her and has a heart attack, dying before she could tell Cristina the truth about Cayetano, and in Refugio's funeral, Rubi is angrily shunned and sent away by her neighbors and Cristina, who found out that Rubi caused their mother's heart attack and disowns Rubi as her sister.

Héctor decides to travel the world with Rubí, since he is not entirely sure that she has gotten over Alejandro. They are away for three years. When they return, Rubí discovers that Alejandro is now very rich and has a new wife named Sonia. During an argument with Rubí on a glass bridge, the floor below Sonia shatters, and she falls through the glass and dies. Rubí comforts Alejandro after Sonia's death and seduces him once again. He and Rubí become lovers.

When he hears that Rubí was at the scene when Sonia died, he has her arrested for murder. They seemingly hate each other now, but Rubí begins to feel love for him again when she learns that she is pregnant with his child, despite not liking the idea of parenthood. Because she does not want to divorce Héctor and lose her money and status, she lies and tells Héctor that the baby is his. She is released from jail, since it is ruled that Sonia's death was accidental.

Héctor overhears Rubí telling her friend Loreto that the child is actually Alejandro's. Angry, humiliated and insane, Héctor realizes that she never loved him, so he keeps her prisoner in her own home, intending to keep her and her child with him forever and away from Alejandro. Rubí manages to get away from Héctor with help of Loreto and Genaro, and the truth about who is the father of her child finally comes out. By now, Alejandro is aware that Maribel has been secretly in love with him and that he too has feelings for her, but he chooses to stay with Rubí for the sake of their baby.

Héctor left everything in his will to Rubí, much to his parents' chagrin. However, Elena, who hates Rubí, makes sure that all of Rubí's money is lost in the stock market. Alejandro is unjustly charged with intentionally letting Héctor die on the operating table and is arrested. Immediately afterwards, the suspicions are proven unfounded and the charges against him are dropped. Upon his release, he uncovers exactly how Rubí lost their baby. It is also revealed that Elena is pregnant with Héctor's child, though he never knew it.

Disgusted by the damage that she has done, Alejandro pays Rubí a visit one last time and tells her that it is over between them: he has chosen Maribel. Rubí begs him not to leave her, even humiliating herself by getting down on her knees. He leaves her and begins to walk down the stairs. As Rubí follows him, running down the staircase while holding onto the rail and screaming that she will never let him go, she loses her grip on the rail, falls several stories down, and crashes into a glass table below.

To save her life, doctors have to amputate her leg. When Rubí wakes up, she finds out to her horror that her leg was amputated. Even more devastating, her beautiful face is now full of scars because of multiple glass cuts. However despite this, Rubí still doesn't regret her actions and escapes from the hospital.

Finding the wedding date of Alejandro and Maribel, she shows up unseen at the church. She sights a gun through a crack on a door, targeting Alejandro, but she cannot bring herself to shoot him. She then aims at Maribel, but her sister Cristina, Maribel's maid of honor, is in the way and blocking a clean shot. Rubí relents and hides in a corner of the churchyard, despondent.

After the wedding, her niece Fernanda wanders over to Rubí's hiding place. Rubí shows her scarred face to Fernanda, but the little girl is not repulsed by it. On the contrary, she feels sympathy for her favorite aunt. When Rubí asks her if she would like to continue meeting her secretly and serve as an instrument to get her revenge and ruin Alejandro's life, Fernanda happily agrees. Rubí then limps away, dressed in rags.

Eighteen years later, Fernanda is all grown up, bearing a striking resemblance to Rubí, save for her blonde hair. She visits her aunt, who is living in a one-room flat. After hearing that Alejandro has returned to Mexico after years of living abroad, Rubí tells Fernanda that Alejandro and Maribel have a son, and that her job will be making both Alejandro and his son fall in love with her in order to destroy Maribel's family.

Alejandro is now the director of a hospital. One day he finds Fernanda in his office. He is utterly shocked, mistaking her for Rubí. Without revealing her identity, she greets him by pulling him by his tie and bringing him in for what looks like a kiss. The screen caption, "The End..?" then appears.

There is a deleted scene from the ending, where an adult Fernanda meets up with Rubí's old friend Loreto (who has lost his fame and became poor) and he asks about Rubí, since she refuses to talk with him and Fernanda tells him about her intentions of avenging her aunt, but first asks him to tell him the full story of her aunt Rubí to better know how to plan her revenge, as her family refuses to talk about her, and Loreto tells her about Rubí's wrongdoings, while showing Fernanda, the neighborhood where she grew up, Maribel's empty mansion and Rubí and Héctor's former house, and when Loreto ends the story, Fernanda sees Maribel and Alejandro's son and decides to take revenge on them. 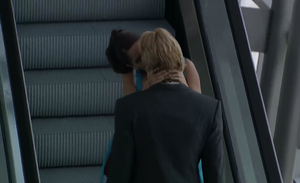 Rubí kissing Héctor in front of Maribel while fleeing together in the airport after Héctor left Maribel at their wedding. 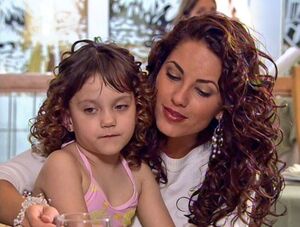 Rubí with her beloved niece, Fernanda.
Add a photo to this gallery 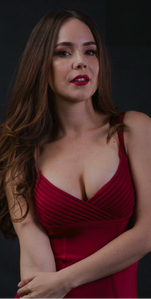 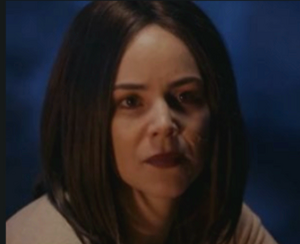 A disfigured Rubí in her early forties, after being scarred and kidnapped by Héctor. 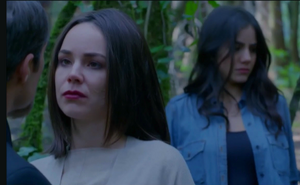 Rubí reuniting with Alejandro after he rescued her and Fernanda from Héctor. 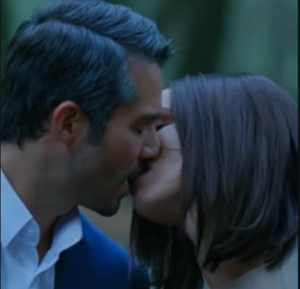 Rubí and Alejandro's final kiss.
Add a photo to this gallery

Retrieved from "https://villains.fandom.com/wiki/Rubí_Pérez_Ochoa_Ferrer?oldid=4289142"
Community content is available under CC-BY-SA unless otherwise noted.