Ultraman R/B The Movie: Select! The Crystal of Bond

Ability to corrupt other beings

Help Yukio Toi with his "dream" by corrupting him into becoming Snake Darkness.

Thief
The Rubber Bandit is a one-time villain from the 2016 reboot of the Cartoon Network original series, The Powerpuff Girls, only appearing in the episode "Memory Lane of Pain". He is a redneck bandit made out of rubber, who likes to steal Mexican children's toys known as Salvador Dollies.

The Rubber Bandit tricked The Powerpuff Girls into setting him free by taking out a Salvador Dolly and offering it to the girls. Bubbles fell right into the trap, snatching up the doll for herself, only to find out it was actually a bomb in disguise as a doll. The bomb exploded and The Powerpuff Girls became ensnared in a bunch of tangled rubber bands, while The Rubber Bandit escaped, albeit rather oafishly, as he slammed into a window before escaping through the door and getting into his tractor and driving away.

The Powerpuff Girls escaped the trap but The Rubber Bandit was already far away. Blossom got the idea to make a slingshot out of some of the rubber bands and fire a giant piece of modern art at him that resembled a lobster lying down on a telephone. The piece of modern art crushed The Rubber Bandit and Blossom captured him and tangled him up and used her heat vision to melt him into a big bouncy rubber ball, which was later used by The Salvador Dali basketball team to win the championship.

Later in the episode, The Rubber Bandit appeared, outside of the flashback, when The Salvador Dali was seen dribbling him when he was in the form of an even more mutilated basketball. 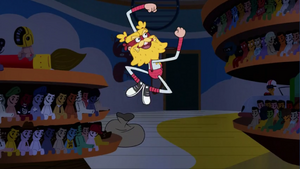 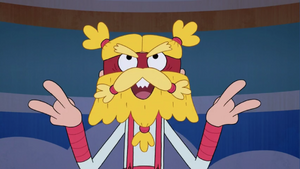 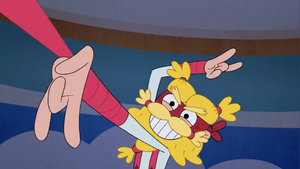 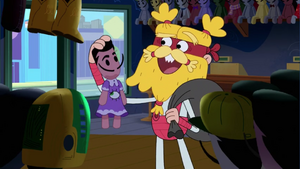 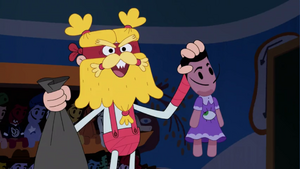 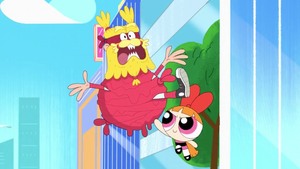 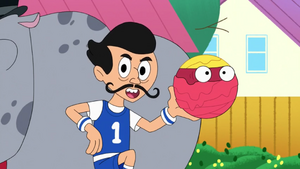