He is voiced by Mitsuaki Madono in JoJo's Bizarre Adventure: Heritage for the Future, and by Shinji Kawada in the anime. For the latter's English dub, he is voiced by Ray Chase.

Rubber Soul appears while the group were in Singapore, seeking tickets to get to India. Disguising himself as Kakyoin, the gang catches on to something being up when Hermit Purple hints that Kakyoin is planning to betray them.

With Jotaro growing suspicious of the faux friend, he fakes buying the tickets to India before knocking Rubber Soul into a cable car. Removing his disguise, Jotaro is forced to flee the cable car Rubber Soul is in, lest be devoured by Yellow Temperance. Changing his disguise to that of a old woman, he watches in amusement as Jotaro tries and fails to remove the bit of Yellow Temperance attached to him, Rubber Soul gloating at his stand's invincibility before letting the Stand overcome a nearby dog. Fleeing, Jotaro punches a hole through the cable car and drags Rubber Soul into the water below.

With Rubber Soul being wounded when he comes up to breathe, Jotaro interrogates the weakened foe, with Rubber Soul revealing the tarot cards for Nena, Hol Horse, J. Geil, and Mannish Boy, with him also revealing that the Hanged Man's user is the one Polnareff seeks. Rubber Soul tries to disarm Jotaro using a nearby manhole as a ambush spot for his Stand, but this fails when Jotaro punches the drain and flushes out Rubber Soul. Rubber Soul is then defeated by Star Platinum's powerful punches.

Rubber Soul's Stand, Yellow Temperance, is a amorphous blob that is able to disguise its user to replicate the appearance of others, assimilate and consume things it is stuck to, and is insanely durable. 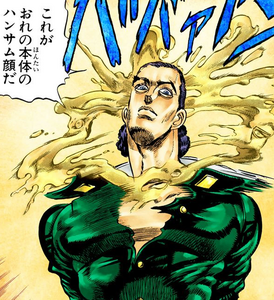 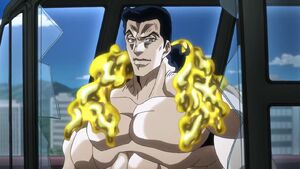 Rubber Soul in the anime.