Capture Chibiusa and other Sailor Senshi.

Rubeus, also known as Crimson Rubeus, is a major villain in the Sailor Moon series.

Loyal to Prince Demande, and one of the founding members of the Negamoon Family, Rubeus was sent back in time capture Chibiusa and shatter the Legendary Silver Crystal. Rubeus sends the Ayakashi Sisters on missions to find the girl while dealing with the Sailor Guardians. Following the capture of Sailors Mars, Mercury, and Jupiter, Rubeus confided his mistrust towards Wiseman with Saphir while Usagi was held captive in Black Moon Castle. After overhearing Neo Queen Serenity speaking to Prince Demande through Sailor Moon, Rubeus begins to question Wiseman and ended up being murdered when he confronted the hooded figure while fleeing the collapsing castle.

Rubeus and the Negamoon Sisters were sent back in time to capture Chibiusa and the Legendary Silver Crystal, while receiving instructions from Wiseman. At one point all five of them faced off against the Sailor Scouts, with Rubeus fighting Sailor Moon before he was forced to fall back. After the Negamoon Sisters have left the Negamoon Family, Rubeus kidnaps the Sailor Guardians to force Sailor Moon to bring him Chibiusa and the Silver Crystal. A battle ensues before Chibusa destroys ship's controls and cause it to self destruct.

the crystal that controls his spaceship causing it to catch fire. After Sailor Moon attacks Rubeus, the Sailor Scouts are freed and they, Rini, and Sailor Moon teleport away, leaving Rubeus onboard his burning ship. Rubeus is confronted by Emerald and begs her to take him back to their time. But Emerald instead leaves Rubeus to die for his repeated failures, lying to Prince Diamond that Rubeus died in battle.

So Rubeus dies deserted and isolated as he coldly deserted his subordinates in life.

Rubeus as he appeared in the 90s anime. 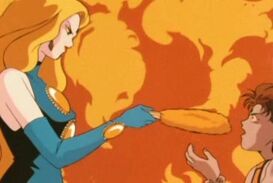 Emerald by her master's orders, betrays and leaves behind the weakened Rubeus. 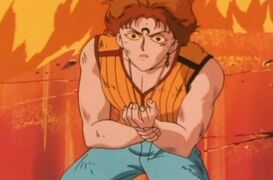 Rubeus after his failed battle with the Sailor Scouts. 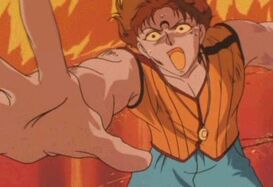 Rubeus begging for Emerald to come back right after she left him behind.