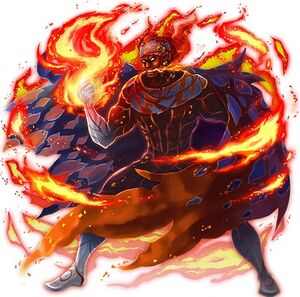 Rubicante is a major antagonist in Final Fantasy IV. He is The Archfiend of Fire, who goes by the title of the Autarch of Flame. He is the Elemental Archfiends leader and the most powerful of them.

Rubicante is in charge of the Tower of Babel, a gigantic tower linking the surface of the world and the Underworld, built by the Lunarian civilization from the Second Moon. With the help of the Dwarf King Giott, Cecil and his group invaded the tower from the Underworld entry. Once inside, they see Rubicante speaking with Dr. Lugae, his underling, leaving him in charge while he went to the Kingdom of Eblan in the surface.

Back on the surface, Cecil and the rest went to Eblan only to discover that Rubicante wiped out the country, forcing the survivors to retreat to a nearby cave. Inside the cave, they witness the prince of Eblan, Edge, challenging Rubicante. Rubicante easily defeats him, but spares his life, as he sees it would be a waste to kill a warrior with such potential. Cecil convinces Edge to join his group, so they can defeat Rubicante together.

They make it to the top floor, where Rubicante awaits for them, however, he does not want to fight, telling Edge he would not reach his full potential with anger alone, and thus he was not a worthy opponent for him. Edge gets furious, releasing all of his strength and challenging Rubicante. As a chivalrous warrior, Rubicante heals them all, so they can fight him with all their might. The group defeats him, so he praises them for their efforts, wishing them good luck.

Rubicante looks like a tall, red-skinned, devil-like humanoid wrapped in a cape.

While cruel, violent and evil, he is quite friendly and genuinely respectful with the protagonists. He admires courage and strives for fair fights, but dismisses hope and teamwork as weaknesses, leading to his downfall.

Retrieved from "https://villains.fandom.com/wiki/Rubicante?oldid=3615118"
Community content is available under CC-BY-SA unless otherwise noted.