Possesings bodies and destroy everything in his path.
Tristepin´s Adventurer mate (current)

To be the most powerful Shushu of its kind (former)

Regenerate and take revenge on his boss Rushu (succeeded)

Barbaric Brute
Rubilax is a Shushu, or a demon more incarnate in the form of a gem on the dagger of the Tristepin dagger. He is recurring antagonist from two seasons of the French cartoon Wakfu. Compelled obsessed with destroying anything around him, and intimidating with anybody he possesses. Usually it appears in the form of a dagger, but can grow up to the size of a two-handed sword.

When first seen, Rubilax is obsessed with destroying everything and killing people (although he never manages to do so even when he had the opportunity). Like all other Shushus, he is extremely arrogant, as he believes himself to be superior to everyone, and is easily provoked, and repeatedly mocks Sadlygrove. He had seized any opportunity to possess someone and attempted to cause carnage (he fails most of the time). The only times that he show fear was before Goultard, the Iop demi-god, and Rushu (when not provoked too much), lord and master of all Shushus.

After he is beaten in duel by Sadlygrove he has a friendlier relationship with him. He nearly cried when Sadlygrove was killed saving Evangeline from Razortime. Against all Shushus, common reason he even saved him, trying to hide this act of kindness behind the swap of their souls. Denied of any kind of merits for his invasion plan, he was foolish enough to let his anger rage, replying back and insulting Rushu, an act of treason punished with death. After being forced out of Sadlygrove's body he remains silent for a while, weighting about the kindness he is not supposed to have.

After they escaped from the Shukrute he becomes a real friend of Sadlygrove (although he still does from time to time mock Sadlygrove in a friendly manner). He even spoke on Sadlygrove's behalf when he had a fight with Evangeline and engaging in casual conversations with Sadlygrove

When Rubilax is not imprisoned in the sword, he is a dwarf sized rock monster with small spikes sprouting from his back. On his forehead there is a red mark resembling the shape of his demonic eye in the hilt of his sword imprisonment. Despite his odd appearance he is extremely powerful, whenever he is hit he grows larger and gains increased physical strength (seen when he sends Sadlygrove flying through several boulders). As he grows his apparence slinghty change, with some sort of flaming veins throughout his body and lesser but bigger spikes on his back. His skin seems to be made of solid rock. While unleashed, he have the power to create an army of clay copies of himself (power that somehow retained while inside Grovy's body), and can produce black flames.

When imprisoned within the sword he resembles a very small dagger with an eye on the center of the hilt. However, he can grow to a large sword with magma flowing through it or a large green sword with motifs.

When he possesses a creature it transforms into a larger and more daemonic looking version of it's former self. The eye of the hilt appears on the forehead of the possessed creature. 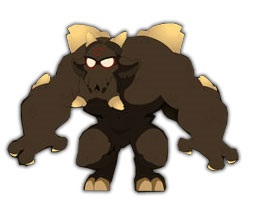 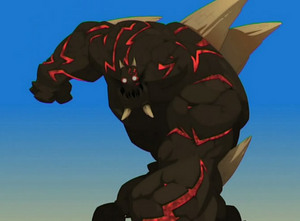 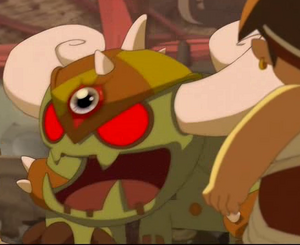 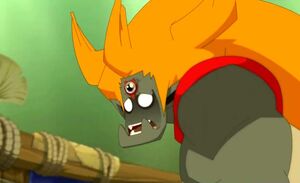 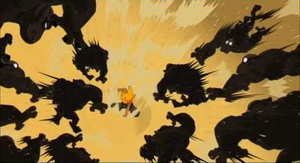 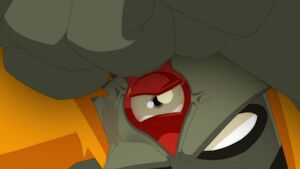 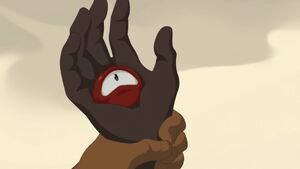 Retrieved from "https://villains.fandom.com/wiki/Rubilax?oldid=3552649"
Community content is available under CC-BY-SA unless otherwise noted.