Eating numerous women and bathing in their blood.

Fantasizing about other women whilst sexually defiling dead women.

Have sex with Jesse (succeeded indirectly).

Ruby is the main antagonist in the 2016 psychological horror film, The Neon Demon. She is a makeup artist, who becomes obsessed with aspiring model, Jesse.

She is portrayed by Jena Malone.

Ruby and Jesse first meet after Jesse's first independent photo-shoot by Dean. She helps her remove her makeup and invites her to a club. There, she meets models Sarah and Gigi. The women are intrigued by Jesse's natural beauty, as well as curious about her sexual proclivities. Jesse feigns experience in the latter.

After signing on with a modeling agency, they inform Jesse to pretend she is 19 while working as a model. She goes to the photo shoot with a photographer named Jack, who calls for a closed set and covers her naked body in paint. The shoot is successful, and Gigi and Sarah begin envying Jesse's youth, while Ruby grows fascinated with her and gives her her number.

Jesse begins displaying a new narcissistic persona after closing a runway session. Shortly after this, she hears her roommate get intruded and assaulted, and calls Ruby for assistance. Ruby invites her to stay with her, to a large, empty home she claims that she is house-sitting for people. She then tries to have sex with Jesse, but is rejected by her having to throw Ruby to the floor. Distraught, Ruby draws a diagram on her mirror, and leaves for her second job as a makeup artist for a morgue. There, she begins to pleasure herself with a female corpse, fantasizing that its Jesse.

Ruby returns home and finds Jesse now unabashed in her narcissism. Jesse is attacked by Gigi and Sarah, who chase her down, leading to Ruby incapacitating her by pushing her into an empty swimming pool. The three women then approach her with knives. Ruby and the other girls is then seen bathing in Jesse's blood. Her topless body reveals occult tattoos. She later lies in Jesse's unmarked grave and performs a ritual, culminating in a torrent of blood from her genitals. 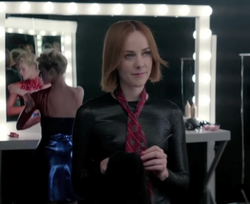 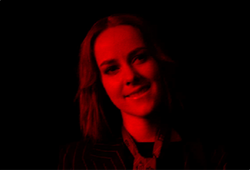 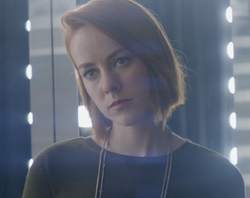 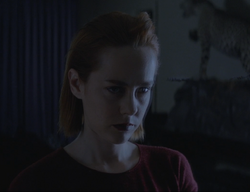 Ruby committing necrophilia on a corpse. 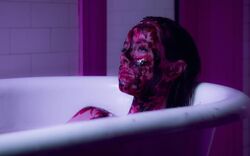 Ruby bathing in Jesse's blood.
Add a photo to this gallery

Retrieved from "https://villains.fandom.com/wiki/Ruby_(The_Neon_Demon)?oldid=3763777"
Community content is available under CC-BY-SA unless otherwise noted.