Making money.
Tending to her cats.

To foreclose every home and buy them out for Hitox (failed).

She was portrayed by Polly Holliday.

Mrs. Deagle was the rich, cruel, greedy, selfish, crotchety, egotistical, arrogant, resentful, persuasive, thoughtless, materialistic, and cantankerous old cat woman of Kingston Falls. She did a lot of things that the residents of Kingston Falls got very peeved off by just so she could make herself wealthier through unscrupulous means. As she knew how to work her way around the law, Mrs. Deagle was always able to avoid being arrested. In a deleted scene, it is revealed that a lot of the residents of Kingston Falls lost their jobs due to the fact that Mrs. Deagle closed down the city's factory and that the people who lost their jobs couldn't afford to pay their house payments, and so Deagle took advantage of that by making the bank foreclose on all of their mortgages. In another deleted scene, it is revealed that she closed down the noodle factory that Murray Futterman worked at. She also despised Billy Peltzer's dog Barney due to the fact that the dog usually damaged things she owned. Whenever she visited the bank she often threatened to catch and kill Peltzer's dog.

However after Billy broke the most important rule of taking care of the Mogwai (never feed them after midnight.) The mogwai turned into little green monsters called Gremlins who proceeded to terrorize the town. Soon Stripe (the leader of the gremlins) along with a couple other of his companions happen to come across Mrs. Deagle's mansion, and Stripe decides it is the perfect place to stir up some trouble. Meanwhile inside Mrs. Deagle is comforting her cats, but while she is doing this she hears Christmas carolers outside. Mrs. Deagle is an avid hater of Christmas and especially hates it when Christmas carolers come and sing at her door. So she grabs a bucket of icy water and goes outside to douse her visitors, only to find out the carolers are Gremlins. Suddenly frightened, she retreats into her mansion, thinking they're devils that have come for her because of her wicked ways. She then hurries on to her electric chair that rides along a banister and goes all away across her staircase, so she can go upstairs and hide. Due to having a very weak heart, she begins breathing out of control and crying out that she's not ready to die. However, it is unfortunate that she did not notice that a gremlin had snuck in through her front door and tampered with her electric chair. As soon as she sat in the chair and pushed the button that would make the chair go upstairs, electric sparks flew out of the chair and the chair moved upstairs at a speed of 80 mph. Mrs. Deagle gave out one final scream of fright while the chair moved upstairs at this speed with no sign of slowing down.

Cut to outside, The Gremlins watch in amusement as Mrs. Deagle blasted out of a window on the second floor, still in the chair, and falling to her death by landing head-first in the middle of the street, in front of a police car, where two police officers, Sheriff Frank Kelly and Deputy Brent Frye, noticed this crime. The two police officers are looking at her corpse lying in the middle of the street, and Sheriff Frank says to Deputy Brent: "My god, Frye, that was Mrs. Deagle".

The last time Mrs. Deagle is mentioned is when the news the next day reports about an investigation into the bizarre demise of Mrs. Ruby Deagle, the widow of convicted stock swindler Donald Deagle. 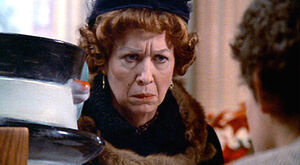