Flip-out built in weaponry
Can blind pursuers with exhaust fumes

Put-upon Right Hand Man
Ruckus is a minor antagonist in Generation One of the Transformers franchise, based on a figure in the 1988 toyline. He is the secondary antagonist of Marvel US' Matrix Quest storyline.

Ruckus first appeared in a flashback in Marvel US #48, which showed him and his fellow Triggercons operating under Megatron on Cybertron millions of years ago. They attempted to gain the power of the Underbase but were thwarted by their opposite numbers, Optimus Prime and the Triggerbots, with the Underbase cast out into space.

Ruckus made his first present day appearance in the Marvel UK story "The Fall and Rise of the Decepticon Empire", where he and the other Triggercons were serving under a lazy Triumverate. The return of Megatron inspired the Decepticons to begin conquests again, with Ruckus and his fellows shooting the Triumverate in the back when they tried to object. A later Marvel UK storyline saw Ruckus lead a team that travelled to Earth to retrieve Thunderwing. They reluctantly joined him in a futile attack on the Ark before Ruckus convinced him to retreat.

This led into Ruckus' present day appearance in the Marvel US title during the Matrix Quest saga. He was part of a team that accompanied Thunderwing in his search for the Creation Matrix. They gained early success when they captured the Autobots Hosehead, Nightbeat and Siren, but Ruckus and the others began to tire of Thunderwing's obsession. When Ruckus mocked him for protecting an animal revived by the Matrix, Thunderwing backhanded him unconscious and later demoted him to guard duty. He accompanied Thunderwing in his later Matrix-powered assault on the Ark but he and the others were mostly left watching as Thunderwing was possessed by the Dark Matrix. After Thunderwing's defeat, Ruckus led the others in surrendering to the Autobots without a fight, saying there had been enough violence for one day. 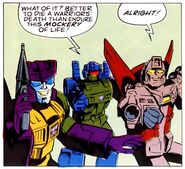 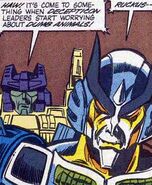