Defeat Conner in his dream (Failed).

Dream Monster
Rude Elf (voiced by Tim Faville) is a reindeer/Mistletoe/Santa themed monster created by Elsa's dream machine. He appears in the episode In Your Dreams.

Conner is consumed with dread on having to do early Christmas shopping with his mother, when he dreams of Rude Elf. Rude Elf is being chased by the Power Rangers on their Raptor Riders, when he summons the Triptoids as his little helpers. Rude Elf proves to be very powerful with his holiday magic, but when the other Rangers realize that Conner is still under Elsa's dream spell, they use their Dino Gem power to strengthen him.

The Red Ranger uses this energy to become the Triassic Ranger and takes Rude Elf into the Christmas Triassic Dimension, where he destroys him. Rude Elf grows and captures the Mezodon Megazord in his bag of toys.

Unfortunately for him, the Black Ranger comes riding in on the Brachiozord and uses his Brachio Staff to take him down long enough to free the Megazord. The Triceramax Megazord destroys Rude Elf, foiling Elsa's plan. 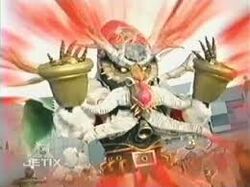 Rude Elf
Add a photo to this gallery

Retrieved from "https://villains.fandom.com/wiki/Rude_Elf?oldid=3573206"
Community content is available under CC-BY-SA unless otherwise noted.