Rudi "The Warden" Jäger is an SS Major serving as the prison warden of Castle Wolfenstein and is the secondary antagonist in Wolfenstein: The Old Blood.

Hew as voiced by Benjamin Jung.

Rudi Jäger oversaw a cable car checkpoint along with his dog Greta. As Blazkowicz hands over his forged ID papers during his attempt to get past the checkpoint, Rudi grabbed B.J.'s hand and examined the passport. He then asked B.J. if he's a Frankfurter, to which B.J. replies to Rudi by saying he's a "hot dog". This causes Rudi and the guard manning the checkpoint to laugh and they then let B.J. go through.

Later, when B.J. escapes and attempts to rescue Agent One, Rudi knocks B.J. out from behind as he is attempting to free him and has him placed in the electric chair he was using for interrogation. When B.J. wakes up he finds Greta eating Agent One's corpse and Rudi standing before him.

Rudi attempts to interrogate B.J., but B.J. manages to break free while being electrocuted. He then throws Rudi into the chair and electrocutes him with it. Greta attacks then B.J. and B.J. manages to kill it, but this distraction provides a chance for Rudi to escape. Rudi orders his men to kill Blazkowicz, but fail as the warden is left vengeful to kill B.J. for the death of Greta.

As B.J. fights off Nazis alongside Annette and Kessler in Paderborn, Rudi appears again in a suit of power armor and begins firing at B.J., yelling furiously at him for killing Greta. However, B.J. manages to disable the armor and make Rudi vulnerable before killing him with two stabs to the head. Despite killing the warden, B.J. was forced to return to the cellar with Kessler due to his power armor having a bomb. 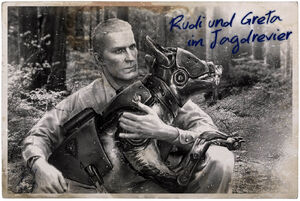 Rudi with his beloved dog, Greta. 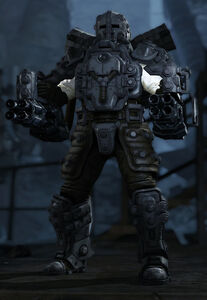 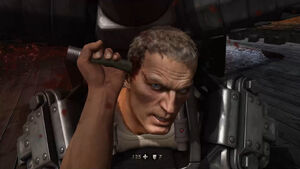 B.J. killing Rudi with his pipe. 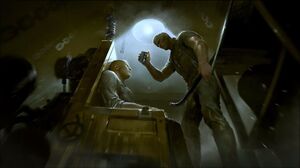 Concept art of Rudi torturing Blazkowicz.
Add a photo to this gallery

Retrieved from "https://villains.fandom.com/wiki/Rudi_Jäger?oldid=4347010"
Community content is available under CC-BY-SA unless otherwise noted.