Emperor Albein Alm Rudolf I, simply known as Rudolf, is a major antagonist of Fire Emblem Gaiden and its remake Fire Emblem Echoes: Shadows of Valentia. The fourth Emperor of Rigel, Rudolf is also Alm's father and Berkut's uncle.

Rudolf is voiced by Takayuki Sugō in Japanese. In English, he is voiced by Jaimeson Price, who also voices Zephiel and Nemesis.

Rudolf is a burly bearded man clad in crimson and black armor with gold trim. He also wears a crimson crown and a purple cape with a white fur trim. In Fire Emblem Gaiden, Rudolf has brown hair and beard, but it was aged white for Fire Emblem: Shadows of Valentia. He wields a lance and a large crimson shield with gold edges.

As Emperor of Rigel, Rudolf detested the state of his country, as his subjects forgot the concept of leisure in their pursuit of power above all else. He similarly despised what the neighboring country of Zofia was becoming, as its people slid into indolent hedonism. Rudolf blamed both nations' declines on the degeneration of their patron gods, Doma and Mila, and believed that freeing Valentia from their influence was the only way to save the country from total ruin. To accomplish this goal, he constructed the façade of an oppressive tyrant; so strong was his determination to produce heroes capable of ruling Valentia without the gods' influence that Rudolf accepted the his condemnation and inevitable death.

A young Rudolf joined the Rigelian army, rising through the ranks to become one of its most famous generals. This renown, along with his Brand of Duma and ability to wield Falchion, led to Rudolf's coronation as Emperor despite only being indirectly related to his predecessor, Rigel III. Shortly after his ascension, Rudolf met directly with Rigel's patron god Duma. Over the course of their meeting Rudolf was disturbed at the early stages of Duma's madness, as the War Father demanded he conquer Valentia in his name. Rudolf pledged dominion of the continent and made a show of preparing for war, while secretly meeting with Halcyon, High Priest of the Duma Faithful, for guidance. Halcyon foretold Valentia’s eventual spiral into destruction, with its only hope resting with "The Children of Fate": one born in Zofia and a second in Rigel, both Branded.

In the year 590, the Empress of Rigel gave birth to Albein Alm Rudolf II, who inherited Rudolf's Brand of Duma on his left hand. Upon learning that a Branded Zofian princess was born around the same time as his son, Rudolf realized that both were the prophesized Children of Fate and covertly visited Ram Village to meet with Mycen, a former Zofian knight exiled for protecting the aforementioned Princess Anthiese (now living as Celica) from the corrupt chancellor Desaix. After explaining his plan to instigate a war that would ultimately free Valentia from Duma and Mila's influence, Rudolf entrusted the newborn Albein to Mycen, hoping his son would grow into a great warrior.

Late in the year 604, Rigel began to enter a famine. When Zofia refused to aid its neighbor, Rudolf decided the time was right to execute his master plan. After receiving Falchion from Duma, Rudolf invaded the Temple of Mila, killing her and sealing her soul into the sword. With Mila's death, Zofia's crops withered, plunging the country into a famine of its own. As Desaix completed his coup against Zofia's King Lima IV, Rudolf officially declared war on the country. By 606, an adolescent Albein, now known as Alm, joined a resistance group called the Deliverance, eventually becoming its leader. Meanwhile Celica, long staying at Novis Priory for her safety, departed to search for Mila.

The War of the Deliverance culminated in Alm's charge on Rigel Castle itself. Determined to lead his men to the last, Rudolf commanded the castle's defense, but not before imploring his men to surrender to Alm should he perish in the battle. Indeed Rudolf fell that fight, but with his last words he revealed to Alm their true connection, and implored Alm to take up Falchion and slay Duma.

A Valentine's version of Rudolf was made available for summoning on February 7, 2020. Rudolf's Valentine's outfit consists of a coat and pants with a similar color scheme to his regular armor. He also wears red and black shoulder armor and matching armored boots. He carries daggers with white roses, and his shield is adorned with a bouquet of similar flowers. 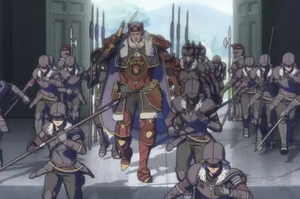 Rudolf and his men storm the Temple of Mila 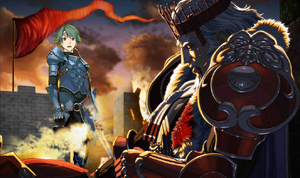 Official artwork of Rudolf from Shadows of Valentia. 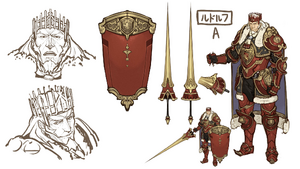 Concept art of Rudolf for Shadows of Valentia. 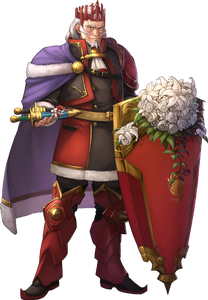 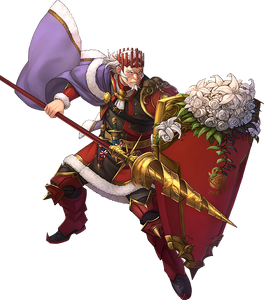 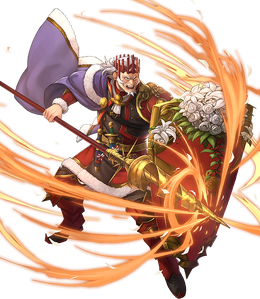 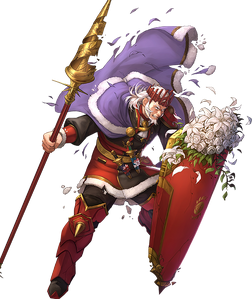 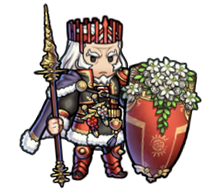 Retrieved from "https://villains.fandom.com/wiki/Rudolf_(Fire_Emblem)?oldid=4375916"
Community content is available under CC-BY-SA unless otherwise noted.