Rudolf Ushiromiya is a villain from Umineko no Naku Koro ni. He is Kinzo Ushiromiya's third child and the father of Battler and Ange Ushiromiya, as well as the husband of Kyrie Ushiromiya. Together with his sister, Eva Ushiromiya, he strengthens the goal of not allowing his eldest brother, Krauss, to monopolize their father's fortune. He immediately entered his second wife, Kyrie herself, in the Ushiromiya family register after losing his previous wife, Asumu, six years prior to the story of the franchise.

At first, Rudolf doesn't seem like a true villain, but Requiem of the Golden Witch reveals otherwise. During the tea party, it is revealed that both he and Kyrie are the true culprits behind the murders of their family as they kill Rosa Ushiromiya. Rudolf and Kyrie then call each of the children one by one, and Rudolf kills George before being killed by Eva, who survived from being shot, shooting him in the chest before shooting him in the head.

He is voiced by Rikiya Koyama. 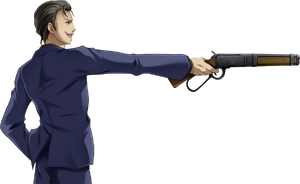 Retrieved from "https://villains.fandom.com/wiki/Rudolf_Ushiromiya?oldid=3374814"
Community content is available under CC-BY-SA unless otherwise noted.