Villains Wiki
Register
Don't have an account?
Sign In
Advertisement
in: Mature, Doctors and Scientists, Totalitarians,
and 32 more
English

Co-founder of the Murkoff corporation

Dr. Rudolf Wernicke is the overarching antagonist of the 2013 survival horror video game Outlast. He is one of the researchers who worked in the hidden research facility beneath Mount Massive Asylum and the co-founder of the Murkoff Psychiatric Systems. He was the main scientist behind the whole Walrider experiment.

He was voiced by Marcel Jeannin.

Little is specifically known about Wernicke's personality due to his short and rare appearances, but he stated it was foolish from the beginning to think they could master and control nanotechnology and with it the human mind and body. This implies that he is either very questioning, realistic or pessimistic. A statement from the company calls Dr. Wernicke a true humanitarian with a generous spirit.

Rudolf Gustav Wernicke was born on October 20, 1918 in Munich, Germany, and achieved fame in the mathematic and scientific communities for a paper written with early computing pioneer Alan Turing. After a cloudy history with the German war effort, he emigrated to the United States in 1949 with a visa from the State Department. Several decades of government research in Los Alamos led to New Mexico, where Dr. Wernicke retired to pursue landscape photography and care for his cats. He is single and has no children. He came to Colorado shortly after the turn of the millennia to pursue charitable work for the Murkoff Corporation.

Dr. Wernicke makes his first appearance near the end of the game. After Miles' last encounter with Walker, who was brutally killed by The Walrider, he opens the door to his office and asks Miles to come inside and let him explain the situation.

He explains to Miles how normally he should have already been dead, but somehow Billy keeps him alive out of sympathy and according to his own words - may even think that he (Wernicke) is his father. He then explains how the Murkoff Corp. contacted him to help them with human nanotechnology experiments, whom they wish to conduct on the asylum patients, with the only reason being profit. Eventually through his work, the scientists produced the precise molecules necessary. He also laments the fact that it was foolish from the very beginning to think they could master such powerful technology, but regardless continued due to the possible large profit. Then the patients escaped and caused the horrors within the asylum in the first place. After being done talking, he instructs Miles to stop Billy and turn off his life support system, so that he could effectively kill The Walrider, who slays anyone trying to escape from the asylum. Miles leaves the room and after much effort, stops Billy's life support and kills him.

He then again appears at the exit with armed security forces at the end of the game to confront Miles, who (unknowingly to Wernicke) has been possessed by The Walrider. The soldiers then shoot Miles (possibly by the orders of Wernicke, who doesn't wish the young journalist to reveal to the public the truth about the Murkoff's plans to profit from the experiments that were illegally conducted on the patients, as well as Wernicke's own involvement) in the chest several times. As Miles collapses to the floor, Wernicke says that Miles has become the host. Gunfire and mauling sounds can be heard briefly before the credits roll.

It remains unknown whether Wernicke was killed in the underground lab or if he was spared after Miles survived being shot several times by Security Forces. It's possible that Miles used the Walrider and gruesomely killed the Nazi scientist and his guards as payback for everything that they did at the asylum. Also, Miles had probably lost much of his sanity due to the horrors he had to face and had likely killed Wernicke. 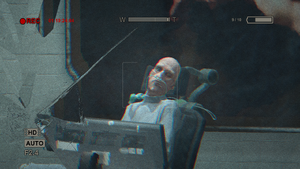 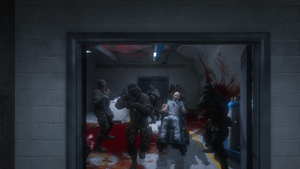 Wernicke next to the armed Murkoff tactical division. 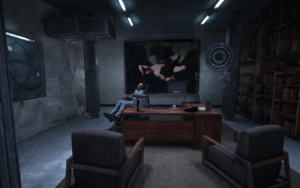