Snitcher
Rudy (actually Bastian Obsztyfitykultykiewicz) - a character from the series Block Ekipa. One of the main antagonists of the cartoon, known throughout the estate for its snitching nature.

Confident is the word that best describes Bastian best. He can even sacrifice his health and life to snitch on someone. What's more, he is able to complain about himself. As Rudy is a compulsive informer, he cannot count on friendship from the inhabitants of Grochów. He is almost flawless, usually when he witnesses a criminal act, pulls out the phone and calls the appropriate services. Sometimes, however, he sometimes turns a blind eye, scratch something himself, or enter into an alliance with someone (usually with Cieślak), as long as he could play this way on three guys. He rarely wins, most often he wraps himself in his own trap. Bastian lives with his parents in an apartment on 11/12 Spawaczy Street. Has only one kernel. He also suffers from rotacism, which means that he cannot pronounce the R voice. Usually he does not use curses, and if so, milder forms, such as "chicken". Ironically, the only word that pronounces correctly is "whore", however, he does not use it in everyday life, because in his opinion profanity is illegal. He also rarely drinks alcohol, because this drug causes a white fever in the boy and he loses his temper then, he smokes e-cigarettes with flavored liquids (e.g. non-alcoholic beer flavor). He is a crypto fan of Polonia Warsaw. In addition, he serves for mass as an altar boy in one of Prague's parishes.

As a child, Rudy went to school with Wojtas, Spejson and Wal and used a bicycle to travel. Even then, Bastian snitched on homies, then he went to cable to the headmaster. You can see that he did not like the main characters at that time. For jokes, they once smeared him with shit, but they managed to avoid punishment, because Spejson ate evidence in the form of a handkerchief soiled with human excrement.

Rudy made his debut in episode 38, in which he snitched to the team sitting on the bench. As part of revenge, Spejson smeared his car with feces, and when Wojtas frightened him during the action, he swallowed proof of his act. Bastian often made his homies miserable, in one episode, dressed up in a surgeon, chased them away from the church, in another he took Wojtas off the maiden met on the internet. When in Episode 45 he purchased Speeder to make the residents of the estate jealous and attract women, the three heroes saw this as a good opportunity to play back and deceived the motorcycle for which Bastian did not even have a driving license.

In episode 49, Rudy's true confessional face came to light. To snitch on the homies, he tossed empty cans under the bench and called the city guard. At his father's plea for Bastian to come to his senses, he changed his face completely. He dyed his hair black, put on a tracksuit, changed his nickname to "Dziku" and joined with the main characters. This state of affairs did not last long, however, everything returned to normal, when the first shoots began to show to the man.

After another of Rudy's actions, the friends decided to play for good. In episode 61, they attached the horn of Corsa to the front of Hornet and significantly exceeded the speed in built-up areas, which resulted in the boy losing his driving license. In subsequent episodes, Bastian, because of hatred of the homies, picked up posters informing about the MMA gala, because he thought that they were hung by them. At this sporting event that took place in Speluno, the boy was a coach of Cieślak due to the fact that he knew martial arts well from old action movies.

Although Rudy repeatedly helped Paweł (and vice versa), he was not invited to his wedding, although he was present at the wedding as an altar boy. He went out to the banquet in the guise of a woman, but when his identity was accidentally revealed, he was kicked out by the bride. This, however, does not destroy his "symbiosis" with Cieślak, he helped him play on his friend Ziółek, packing himself under the wheels of speeding Golf, which was driven by a drunk object of revenge and breaking his leg.

Immediately after recovery he saw another victim, which was of course three homies. Rudy made a lot of attempts at denouncing them, be it for possession of left alcohol or illegal drugs. It even came to the fact that the boy wrote on the walls of blocks and spread a rumor on the estate that Spejson is a virgin to humiliate him in front of the whole community. This, however, came out unscathed, ordering a prostitute to Speluno and regaining his good name. In another episode, Bastian didn't snitch to the services, when the scrapers stole Wojtas's car from the parking lot, fortunately the homies managed to forcibly get information about the vehicle from him.

In episode 80, Rudy and his friend Marcin founded a two-person body called Citizens' Guard, whose task was to snitch the inhabitants of Grochów. The organization was dissolved when its members were brutally beaten by Kołacina at the request of the homies.

The hero's snitching increased more and more. In one of the episodes he founded a bug in Wojtas' hood, which gave him insight into every offense they commit. When the crew got the hang of what was going on, they let Rudy get caught in his own trap. Thinking that his enemies would trade the goods, Rudy called to the address of his own apartment. He was arrested for suspected drug possession.

Rudy even went so far as to bring alcohol without excise duty on Christmas Eve in Speluno, with a purpose in it. The boy hoped that when everyone would drink, he would be able to snitch the possession of an illegal drink. However, Cieślak sensed the trick and forced Rudy to drink together. Not used to alcohol, Bastian began to behave aggressively towards the city guard and was taken by officers. At the second MMA gala, a vague arrangement between him and Cieślak again, whose boyfriend was again the coach. After the party, Bastian returned to his miserable lives of the main characters. He snitched on illegally taking place street racing or crushing the surface of a basketball court, which Bastian is a huge fan of.

In episode 118, at Dzika's cap, which Walo threw at Rudy, there was a mountain bike award. Bastian used the winning cork for his purposes, exchanging it for a two-wheeler. When the homies learned about this, they decided to regain their property. As a result of unsuccessful theft of the vehicle and attempts to recover it by the police, the bike was damaged. Embarrassed by this situation, Rudy decided to try to win again by buying a crate of beers. Instead of finding a coupon, Rudy got drunk on the contents of the bottles and began to demolish the estate with despair.

In episode 120, he works as a supplier at Mussolini Pizza. As he began to snack on the dishes he provided, the homies punished Kołacina again, who this time raped him for delivering the eaten pizza. In episode 122, he disguised himself as a Halloween devil, but the fellows did a prank, which is damage to Rudy's phone, which he swore he would eventually put in jail. In episode 124, he decided to snitch to the prosecutor's office for an event about wrestling in jelly, he first recorded on the phone. In episode 130, he was interested to transfer the hidden money to the prosecutor's office, but the fellows outsmarted him.

In episode 144, he used his binoculars to catch some friends in an illegal business called "Wojtank", where he prepared an ambush (unsuccessful). In the next he followed the homies in Speluno, then caught them for his own alcohol and summoned a bodyguard who threatened with a stun gun. Later, Rudy is with the girl in the park, he was thrown by a can of beer by Spejson and wanted to call the police, but the battery in his phone was discharged. In order for him to relax, the girl suggested a turn, but he thinks it is a drug and after arresting the girl, she thinks order must be.

In episode 154, he was jealous that Buda punished the homies before he wanted to snitch on them, then he plotted the plot about parking on the lawn by recording a webcam with glasses, then returned to wiring as before. In episode 158, he witnessed that two women were driving a damaged car recording a telephone and snitched to the police.

In episode 159, he complained that there is nobody to snitch, since most people spend Christmas Eve at home. Then he came to Puchacki for dinner, but he guessed that the borscht tasted more vodka and at the same time snitched to the police for violation of immunity by Spejson. Later he wanted to snitch drinking alcohol to the city guard, who is also at the Midnight Mass, so he provoked and unfortunately was hit by lightning.

In episode 172, he decided to join the freestyle battle to arrange his rhymes against his countrymen during Wojtas' performance. Later, he decided to play with them by buying alcohol from the store, handed them to the homies and called for protection, but it turned out that the alcohol was in the table where Rudy was sitting and was thrown out by the security himself and got a month of ban on entry for violation of the rules.

In episode 176, he called the police to take over the barge by the fellows and the guests. Then, with the police, he wanted to chase the homies in the water before they reached the shore, accidentally started the stun gun in the water and ended in an electric shock and a mandate for electric trotting by the Fishermen's Guard. In episode 183, he took a picture of a fight before Speluno and called the police.

In episode 188 his denunciations were getting stronger that he was snitched by the majority of the inhabitants who had enough of him. After a discussion of the residents in Speluno, he wanted to snitch again to everyone as before, but he did not know that they were doing things legally. Later, Rudy went crazy that he has no one to snitch and his life lost his sense, he suddenly receives a call for an illegal procedure, but he does not know that it is a provocation, and Rudy goes to a psychiatrist. In episode 192, he left the psychiatric hospital, but his behavior is unchanged that he is still snitching. 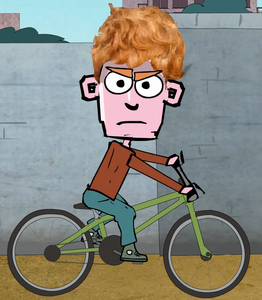 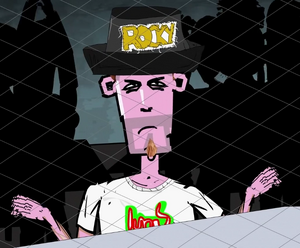 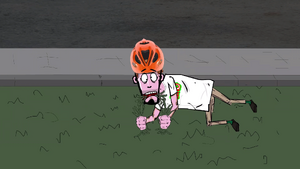 Rudy gone crazy from lack of snitching on everyone. 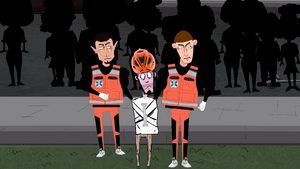 Rudy after losing of his sanity by lack of snitching taken by doctors and sent to a psychiatrist.
Add a photo to this gallery
Retrieved from "https://villains.fandom.com/wiki/Rudy_(Blok_Ekipa)?oldid=3807497"
Community content is available under CC-BY-SA unless otherwise noted.