Conquer the Music Box World and the real one as well (in Wario Land 3).
Steal the mega vitamins (in Dr Mario 64).

Rudy the Clown is the secondary antagonist of the Wario Land series, serving as the main antagonist of Wario Land 3 and Dr. Mario 64. He manipulated Wario into freeing him, only to declare he had no further use for the greedy anti-hero and attempted to "squash him like a bug" before ruling the magical other dimension he originated from called the "Music Box World" but he was defeated.

Following this defeat, Rudy the Clown would become a recurring villain in later games.

Rudy the Clown was an evil being that arrived on a once peaceful world and attempted to take it over but was sealed away with the aid of 5 magical music-boxes, however, he used the last of his power to curse the inhabitants of that world into strange monsters as punishment, during the course of the game an unseen Rudy has Wario collect these 5 music boxes to free him only to instantly betray Wario once he is free - attempting to kill him as he saw no further use for Wario. However, Wario defeated the evil clown and with Rudy defeated the world he had cursed returned to normal - as thanks to the people of that world allowed Wario to keep all the treasure he had found which, in Wario's view, made it a very happy ending.

In this game, Rudy the Clown is the main villain again and is significantly smaller than in Wario Land 3 and now lives in the Mushroom Kingdom, implying than he somehow escaped the music box. He develops a bad cold and needs Dr. Mario's mega-vitamins to heal himself, however, since he's evil, he assumes Dr. Mario would never come to him, so he has his minions steal the mega-vitamins instead. Dr. Mario and/or Wario (depending on who the player is playing as) chase his minions across the world and to his castle, where Rudy confronts them directly. After the player defeats Rudy, they heal his cold and he thanks them, and the character you are not playing as eats the mega-vitamins and, for some strange reason, turns into ether Metal Mario or Vampire Wario, the true final boss. 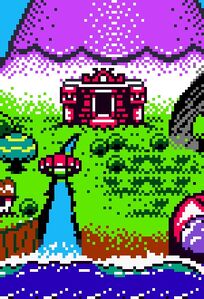 The Temple, the only place in the Music Box World where Rudy was trapped within.

Wario Land 3 - Final Boss (
The battle with Rudy the Clown