The Betrayer
The Collector
Total Nut-Job (by Alfie)

Collecting everything to do with the Frobisher-Smythe family.

Discover the Cup of Anubis and become immortal (failed).

Locate the Mask of Anubis and become omnipotent (succeeded in finding the mask only).

Rufus Zeno is a villain in the series House of Anubis on Nickolodeon. The show lasted three seasons and had one made-for-TV movie. Rufus was in the first two seasons.

Not much is known about his past. He was born in 1915, the same year as Victor and Sarah Frobisher-Smythe, daughter of Robert Frobisher-Smythe and Rufus' adopted sister. Victor and Rufus kept themselves young because they drank the elixir of life, while Sarah died at the age of 95. Victor is his archenemy,Vera Devenish is his employee.

Rufus is a man who is obsessed with immortality and power. Unlike Victor, who will not knowingly hurt anyone to achieve immortality, Rufus will resort to anything. In the show, he has kidnapped people and stolen precious items in order to achieve his goals. He is a madman and is inarguably insane.

When we first see Rufus, he is a mysterious figure that appears to be stalking one of the main characters, Patricia Williamson. When he introduces himself to Patricia as a private investigator named Renee Zeldman, she begins to trust him as an ally to help her find her missing friend, Joy Mercer. However, Rufus is quickly revealed as a bad guy when he kidnaps Patricia. Later in the Season, Rufus bribes one of Patricia's friends, Jerome Clarke, in order to have young Jerome spy on Patricia and some other teenagers who are trying to build an immortality-granting cup. Jerome, feeling guilty for betraying his friends and scared because Rufus has been threatening him, betrays him. In the Season 1 finale, Rufus is tricked into believing he is immortal and leaves...possibly for good.

A mysterious figure known only as the Collector shows up in Season 2. This is later revealed to be Rufus. He still believes that he is immortal, but now wants to become a God. He employs Vera Devenish and Jasper Choudhary to help him achieve this goal. At one point, he kidnaps Jerome. He refers to Jerome as "a valuable pawn" and clearly enjoys extracting his revenge on the scared teenager for betraying him in Season 1. Jerome is saved when Rufus, overcome with greed for godly powers, foolishly puts on a cursed mask that banished him to a fiery pit of Death.

Rufus and Patricia in his van 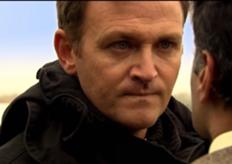 Rufus puts on the mask

Rufus talking on the phone

Rufus as the Collector

Rufus talking with Jasper
Add a photo to this gallery

Retrieved from "https://villains.fandom.com/wiki/Rufus_Zeno?oldid=3802993"
Community content is available under CC-BY-SA unless otherwise noted.