Capture the Land of Vegetables (both failed).

Ruiga was a antagonist of the Peddlers Escort Mission arc in Naruto. He was the youngest brother of the three evil ninjas, the third man of the Janin.

He was voiced by Katsuhiko Kawamoto in the Japanese version, and by Brian Dunkleman in the English version.

Rugia was the youngest brother of the three evil ninjas. The oldest brother Renga led a coup against the Land of Vegetables and its landlord. The coup also involved the middle brother Jiga, the youngest brother Ruiga, other trained ninjas and traitors. Renga killed the landlord, but however, two ninjas tasked with capturing the landlord's daughter fail. Ruiga agrees to capture the princess and kill her, while Jiga and Renga killed the traitors. He meets one of the girl's bodyguards, Kikunojō, and they begin to fighting. The Flower Ninja Art was ineffective against Ruiga. He, in turn, defeated Kikunojō with his unique water style ninjutsu. He closes him in a water bubble and feeds him with piranhas.

He then makes a detour and found the other bodyguard Yurinojō and his companion Naruto Uzumaki. However, the princess was not with them. Ruiga fights against the two young ninjas, but they are also helped by a third opponent, Chōji Akimichi. However, even three of them can't beat him, it looks like they’ll never run out of water jutsus. However, Naruto notices that something is wrong with him, and then Yurinojō realizes his weakness. They went into battle against him again, but Naruto attacked from ambush and Ruiga defend it the attack, but the boy smashed his tomfas. Ruiga did not take seriously that his weapons were broken, as he believed he could defeat them with only his jutsu. He summoned a shark into a water bubble and began to chase the heroes. He caught up with them in a hilly, rocky land. He caught Choji and the shark seemed to be eating it, but then he started sniffing the water. Ruiga was very surprised when the jutsus did not work here at all, his shark was disappeared. Because his overweening he did not notice that the three heroes had deliberately led him here, because there was no water anywhere in this rocky land. Ruiga was completely vulnerable without his weapon and ninjutsu, Choji used the Human Boulder jutsu and his weight was even heavier due to the water he drank earlier. He squeezed Ruiga, who could no longer fight. The heroes left it there, knowing he was no longer a threat. A little later, he was found by the middle brother Jiga. Ruiga asked help to his brother, but Jiga remarked that "you got what you deserved" and saw the profit that if he killed Ruiga he would only have to share the power of the country with they elder brother Renga. Ruiga shouted loudly to his brother not to kill him, Jiga buried him alive with his unique magnetic jutsu and he laughed out loud at him.

Rugia was a rather overweening, boastful and uppity. He held himself too great next to his two brothers, as well as looking down on his opponents, considering them weak against his own jutsus.

Ruiga was a talented and strong ninja. Although he was the weakest of the Janin, he still stood up well against three strong ninja hero until his weakness was discovered.

Ruiga used unique water style jutsu. He was able to control the water and moisture of the earth. This was able to create small or large bubbles that could be used to drown the enemy, defend attacks, or simply capture the enemy. It was similar to the water prison jutsu, but it differed in that sometimes a barrier could be created from it inside which it was possible to breathe. However, this jutsu had a weak point. Ruiga’s technique only worked where there was water on the earth. In the rocky, mountainous, stony areas where there was no water in the ground at all, Ruiga could absolutely not use his jutsu.

Ruiga was one of the few ninjas who could summon several creatures. He was able to summon human-toothed piranhas and a great shark. These creatures could only move in Ruiga's unique water jutsu so they couldn't go too far from him. Without water, these creatures disappeared after a short time.

Ruiga was a skillful and good melee fighter. His weapon was two tonfa, which he handled very skillfully. He was able to fight multiple opponents easily and quickly at the same time. 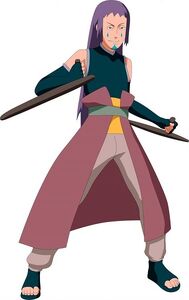 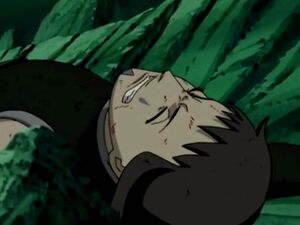 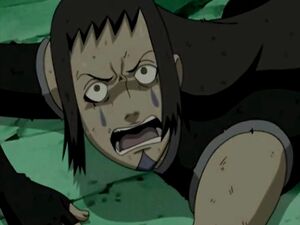 Ruiga shortly before his demise.