My King (by Thresh)

King of the Shadow Isles

Use the Waters of Life to restore Isolde (failed).

Curse himself to live in undeath (succeeded).
Get revenge on the world of the living.
Reunite with Isolde (both ongoing).

Viego, commonly known as the Ruined King, is a major antagonist and playable character in the League of Legends universe. The mad king responsible for the Ruination of the Blessed Isles, Viego now has full control over the Black Mist and rules over countless undead spirits as he plots his revenge on the world of Runeterra.

He is the 154th champion added to the game on January 21st, 2021 as a jungler, and will appear in Ruined King: A League of Legends Story as the titular main antagonist.

He is voiced by Sean Teale.

Long ago, in the long-forgotten kingdom of Camavor, Viego was the second-born heir to the kingdom’s dynastic ruler. He lived a pampered life which made him complacent and selfish. After his older brother died, Viego was forced to take the crown despite lacking the worthy qualities of a ruler. One day, he met a poor seamstress named Isolde, whom he fell in love with and married before promoting her to the queen of the kingdom. Viego and Isolde were inseparable lovers, with him devoting his life to her.

King Viego’s allies disliked him due to his questionable rulership and plotted to overthrow him, but the kingdom’s enemies took advantage of this by sending an assassin to kill the unfit king using a poisoned dagger. The assassination attempt failed, but Queen Isolde was wounded by the dagger and ended up being poisoned, leading to her becoming deathly ill. Refusing to accept his wife’s fate, King Viego went mad and locked himself with his wife’s body.

One day, he learned about the Blessed Isles and its Waters of Life which had the power to heal any ailment. He sent the kingdom’s army, the Iron Order, led by his most trusted general and niece Kalista, to find a cure, and appointed Knight Commander Hecarim to take her place.

As the queen's condition worsened, Viego was stricken with grief, and in his paranoia thought the people at the kingdom were trying to separate her from his dying spouse. The king sent Hecarim and the Iron Order to spread havoc and destruction throughout his kingdom to quell the angry dissidents in his empire. Meanwhile, a long time passed as Kalista scoured the entire world for a cure, and she learned of the Blessed Isles, a magical place with life-giving water. The citizens allowed Kalista through to their isle, and allowed her access to the Waters of Life to restore the queen to good health, on the condition that the Waters were only to be used while the queen still breathed. However, the queen died before Kalista could make it back in time, and the king further sunk into despair, sending his army to far-off lands to take revenge on the world for allowing his wife to die. When Kalista returned and announced that the cure she found was now useless, Viego flew into a rage and locked her in his dungeons as a traitor.

However, the interested Hecarim managed to get information on her experiences of the Blessed Isles, including the magical veil of pale mist that protected them, their wealth and the Waters of Life. Convincing her to lead the way to the isle under the guise of helping her uncle recover from his sorrow and rage, they were blocked by the people of the island's capital, refusing to cheat death itself. The furious Viego ordered Kalista to kill them, but when she refused and asked Hecarim to stand by her side, the traitorous commander and his troops betrayed her and her own group of soldiers, stabbing them with their spears. Viego, unconcerned with the cold-blooded murder of his own niece, sent Hecarim to raid the treasures of the capital, Helia, as he searched for the Waters of Life to revive Isolde.

But Viego would not find the Waters of Life on his own. Instead, a traitorous custodian from the Blessed Isles approached the king and granted him access to the sacred waters. Viego lowered his wife's dead body into the Waters, but was horrified when his beloved queen was brought back as a hideous, rotting corpse. In agony and confusion, Isolde took her husband’s enchanted sword and stabbed him in the heart with it, causing the chamber’s energy to amplify a hundredfold due to being mixed with the sword's magical energy. The resulting blast of energy decimated the island and its inhabitants, and the mist around the island was permanently corrupted into a hideous, sinister Black Mist.

The Black Mist further corrupted others, such as the escaping Hecarim (he and his horse fused and transformed into a ghastly specter, reflecting his ugly personality), Thresh (who adored the ruin and arose as a nightmarish fiend that hunt and kill the living), Kalista (who became a spirit of vengeance, summoned by those also vengeful), Maokai (the original protector of the island and its resources, now a twisted, vengeful elemental who fights against the Ruined King's men), and Yorick (a communicator with the dead, gripped by the mist with his refusal to die and now able to control the corpses of his fallen friends and seeks to destroy the Black Mist).

After the Ruination, the Blessed Isles became the Shadow Isles, forever bound to the soul of Viego, the Ruined King, who became the ruler of the restless, tormented souls. Every Harrowing, the Black Mist expands its reach across the ocean, twisting travelers into abominations that the Ruined King adds to his legions of undead. Under the Black Mist, the Ruined King has sworn vengeance against the world of the living, for if he can no longer be happy, then no one will.

On a remote island, Lucian and Senna plan to go to Mudtown to repair Lucian's gun, until Senna hears Isolde's soul warning her about the Ruination. Just then, a huge cloud of Black Mist approaches the island. The couple goes into the Black Mist, with Lucian killing the ghouls attacking them, until they come face to face with the Ruined King himself. Viego says that he has crossed through death and ruination to get to Isolde, and demands Senna to return her soul. Senna tells him that he'll destroy this world, but Viego teleports up to her and grabs her, saying that Isolde is his world. Viego forcefully takes Isolde's soul from Senna's body, while spreading the Black Mist and his army of ghouls to different regions of Runeterra.

In Noxus, Darius oversees his solders while Samira notices the Black Mist heading towards them. As the Mist is about to touch Samira, Darius sacrifices himself to save her, getting possessed instead. The two Noxians fight, but Samira manages to break Darius' possession. In Ionia, Karma tries to defend her temple from Viego's forces, but is possessed by the Mist. She tries to resist the possession and manages to dispel it, sending forth energy that pushes the ghouls away. In Demacia, Poppy guards the empire's gates, assisted by monster slayer Vayne, who save each other's lives and team up to defend Demacia from the Ruination. Viego himself corners Senna with the Black Mist, but Lucian rushes Senna away, while jumping down a cliff.

Viego still manages to reclaim Isolde's soul by absorbing it into his sword, smiling since he has achieved his goal before walking away. It is later revealed that Senna and Lucian survived the ordeal and took a boat. Senna desperately wishes to go back for Isolde, but Lucian tells her they can't do it alone, with the five other champions affected being united with the same goal of stopping Viego.

Viego is sitting on his throne, trying to remember Isolde's appearance but unable to recall her completely. He had a painting on the wall depicting himself and Isolde when they were alive, but he removed her from the picture as he could not bear to look at his wife again. After breaking down in grief, Viego asks himself why things had to go like this and why Isolde won't come back to him, but he already knew the answer.

The Black Mist is the embodiment of Viego's will and sadness, and a cruel reminder of what he lost centuries ago. Wherever it goes, it is always looking for Isolde, since after all everything Viego does is for Isolde. He eventually gets to a town which has what he's looking for, spreading the Black Mist to the town and decimating the townsfolk. The Ruined King confronts the town's leader, telling him about the treasure and wanting him to serve him eternally in return. The leader asks him if giving up the treasure will mean that the city will be spared, and Viego loses his patience and kills the man anyway, raising him as another wraith.

Viego retrieves the treasure, which is the music box given to him for his wedding day. He affectionately embraces the box, while thinking of Isolde's smile once he sees her again. The Ruined King promises to find her, before disappearing into the Mist while the city is destroyed by the wraiths.

Due to having a royal upbringing, Viego was a complacent and spoiled ruler who saw little worth in his position until meeting Isolde. He fell in love with her, marrying her and promoting her to queen. So much was his love towards Isolde that when she was killed in an assassination meant for Viego, he was driven mad from grief and did whatever he could to bring her back, even morally deplorable acts. As Isolde succumbed to the poison, Viego became more unhinged and resented failure, seeing his own niece Kalista as a traitor for failing to cure Isolde, and wanted the Iron Order to kill the people of the Blessed Isles for standing in the way of his goals.

After his failure to revive Isolde resulted in the Ruination of the Shadow Isles, Viego, now giving himself the moniker of the Ruined King, became even more obsessed and broken than before. He despises the world of the living and wants to turn all of Runeterra into a kingdom of death and ruin, but he wants to reunite with the soul of Isolde first and foremost. The Ruined King claims that he will stop his reign of terror when he gets her back, but is willing to commit unforgivable atrocities under the belief of being for his wife’s sake. He mainly hunts down Senna due to her containing Isolde’s soul, and Yorick due to believing that the Maiden of the Mist is Isolde. 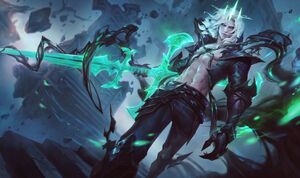 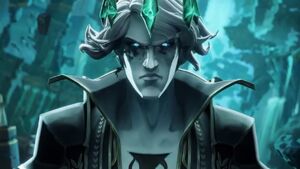 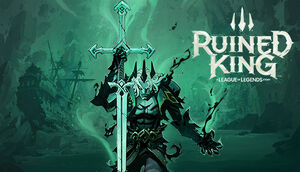 Artwork for Ruined King: A League of Legends Story. 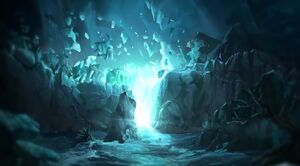 The Ruination of the Blessed Isles. 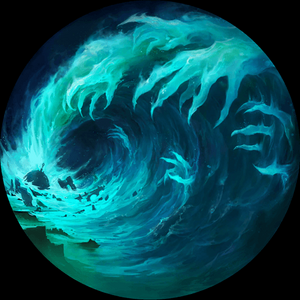 The Ruination in Legends of Runeterra. 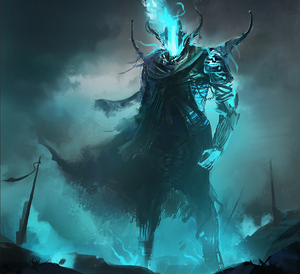 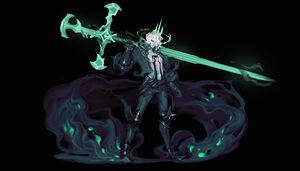 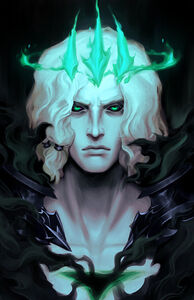 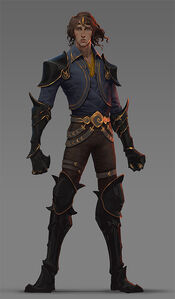 Viego's appearance before the Ruination. 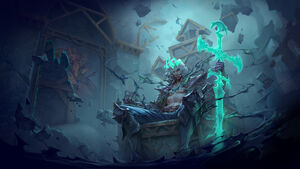 Artwork of Viego from the short story "She".
Add a photo to this gallery 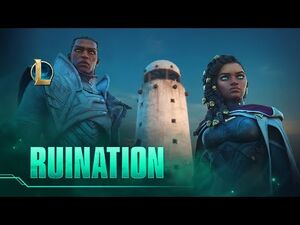 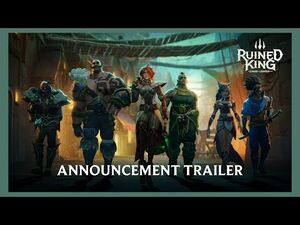 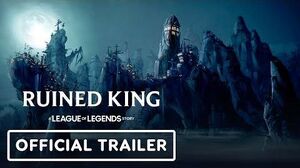 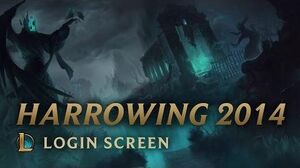 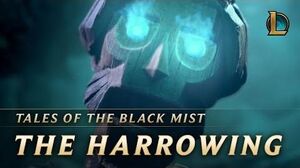 The Harrowing Tales of the Black Mist Cinematic - League of Legends 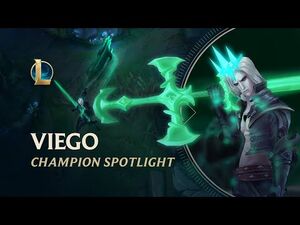 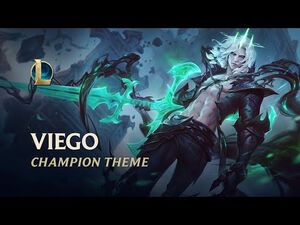 Viego, The Ruined King - Champion Theme - League of Legends
Add a photo to this gallery

Retrieved from "https://villains.fandom.com/wiki/Ruined_King?oldid=4165997"
Community content is available under CC-BY-SA unless otherwise noted.