Heir to the Empire (Legends)

Agent of the Galactic Empire

Eliminating Thrawn and the Empire's enemies.

Serve the Galactic Empire and aid in its unification.
Avenge the Noghri people (succeeded).
Canon:
Track down and eliminate the rebels on Lothal.
Obey the orders and wills of Grand Admiral Thrawn.

Rukh is a recurring antagonist in the Star Wars franchise, having first appeared in the Legends timeline before being adapted into the Canon timeline, appearing as a major antagonist in Season 4 of Star Wars Rebels. Rukh is an agent of the Empire and is the personal assassin and lieutenant of Grand Admiral Thrawn who was first seen being dispatched to Lothal to aid in suppressing the insurgency on the planet and aided Governor Arihnda Pryce in the efforts to do so.

In the canon Star Wars Rebels TV series, he was voiced by Warwick Davis.

In 1 BBY, after the theft of the prototype TIE/D Defender on Lothal, Grand Admiral Thrawn sent Rukh to assist Governor Arihnda Pryce in the search for the rebels responsible. Pryce suspected that the thieves would return to the vicinity of the crash site to retrieve the prototype's removed hyperdrive.

Upon arriving at the crash site, Rukh smelled the Lasat rebel Garazeb Orrelios, as well as Ezra Bridger and Jai Kell, nearby where they were retrieving the drive. As the assassin approached the scene, Bridger attempted to stall him by claiming that he and Kell, who were both disguised as scout troopers, had just finished searching the area. The ruse did not work, and Rukh attacked the two. During the fight, he realized that Bridger was a Jedi when he used the Force to fling him into a rock. The two escaped on a speeder bike, with Rukh pursuing. Meanwhile, Orrelios had evaded the assassin and escaped with the hyperdrive in an Imperial Troop Transport.

Rukh chased Bridger and Kell through a labyrinth of rock spires on a speeder bike. He engaged Bridger in a brief fight, his electrostaff to Bridger's lightsaber. When the two rebels pulled ahead due to Rukh being forced to evade a boulder in his path, the assassin fired a homing beacon at their bike, which they did not notice. Rukh continued the pursuit, eventually launching his bike over a pile of rock that Bridger had created as an obstacle with a planted detonator While in the air, Rukh's bike was destroyed when Bridger fired upon it, and the rebels fled. Using his tracking device, Rukh located the rebel camp and sent Pryce the coordinates. However, due to the rebels' earlier escape, Pryce did not allow Rukh to take out the camp by himself, which he was confident he could do. She instead attacked with several tanks, a strategy that he criticized. After the Rebels had escaped the camp, deeper into the mountains, Rukh insisted that he be allowed to pursue, but Pryce refused, deciding instead to bomb the mountains.

During the Rebel attack on Lothal, Rukh was stationed in Capital City. The rebels' attempts to destroy the Imperial fuel depot and factory had failed, as Thrawn had prepared a second set of TIE fighters to intercept the bombers after they broke through the blockade outside the planet. Upon being informed that some Rebel pilots may have survived their crash-landing, Thrawn tasked Rukh with capturing any survivors alive, only killing them if he had no choice. Thrawn also told him to capture Hera Syndulla, the attack's commander, at any cost. Rukh complied, and during his mission, he captured Rebel pilot Secon Daree and brought him to Pryce, who congratulated the assassin. Rukh later searched for Syndulla, acquiring her scent and found her helping another pilot, Mart Mattin. He ambushed the trio and engaged in a short skirmish with them. While he was unable to capture Mattin and Chopper, he managed to separate Syndulla from them, which led to her capture by Imperial forces.

When the Spectres mounted a mission to rescue General Syndulla, Rukh was on patrol when he encountered two stormtroopers. Rukh asked the troopers if they had anything to report. His nostrils twitched as the Spectres passed over him in three Loth-bat gliders. Sensing something afoot, Rukh tried to warn Governor Pryce. While he was talking with her, the Jedi Knight Kanan Jarrus freed Syndulla from Pryce's office. Rukh pursued them by climbing up the Imperial Complex to the garbage chute on the south entrance. Rukh briefly fought with Kanan, resulting in the loss of Jarrus's lightsaber. However, Kanan pushed him off the building but Rukh managed to avoid death by clinging to a balcony. The rebels escaped on a glider but Kanan was killed.

Following the death of Kanan Jarrus, Rukh was present in Governor Pryce's office during a hologram briefing with Grand Admiral Thrawn. Thrawn reprimanded Pryce for destroying the Lothal City fuel depot and disrupting the Empire's TIE Defender project on Lothal. After chastising Pryce, Thrawn warned Rukh that the rebels would strike recklessly and tasked him with eliminating them. As Rukh left the room, he smirked at the chastised Pryce.

Continuing his hunt for the Spectres, Rukh encountered a scout trooper who had been knocked out by the Lasat Garazeb Orrelios. He narrowly escaped being killed by an explosive that Sabine Wren had planted on the trooper's bike. Rukh's sharp senses helped him to home in on Sabine and Zeb, and he followed them into the wilderness. Sabine and Zeb trapped him but Rukh turned the tables on them by activating his cloaking device. Armed with his cloaking device, Rukh viciously attacked Zeb.

Using her Mandalorian helmet's rangefinder, Sabine managed to shoot at Rukh. However, he was able to dodge her with superhuman reflexes and managed to knock out her helmet. After struggling with Zeb, Rukh retreated for a second round. This time, Sabine managed to neutralize his cloaking device by throwing a paint bomb at him, damaging his cloaking device and partially painting him. Now visible, he was quickly overpowered by Orrelios. Zeb almost beat him to death but was stopped by Sabine, who convinced him to spare Rukh's life. Wren instead spray-pained Rukh before sending him back to the Empire on a speeder bike.

Trap at the Lothal Rebel Base

Rukh accompanied Pryce on an invasion of the rebel base. Ryder Azadi nearly shot him, but decided to maintain his cover and let him go. Rukh fought with Ezra Bridger. When the rebels retreated into the cave, Rukh followed them with his men, and found Bridger standing in the dark. When Rukh taunted Bridger about his "army", Bridger ignited his lightsaber, revealing a pack of Loth-wolves, terrifying him. In the ensuing battle, he was thrown off the encampment by the White Loth-wolf. While he survived the plunge, he lost his electrostaff.

Despite being thrown by the loth-wolf, Rukh managed to survive the fall. Later, he found Commander Wolffe, Mart Mattin and Cikatro Vizago loading up the Ghost and attacked them. He easily subdued all three rebels and prepared to kill them, but became terrified when the white Loth-wolf returned and hastily boarded a stolen patrol transport to escape. He then informed Thrawn of Pryce's capture. Thrawn tasked him with disabling the Planetary Shield Generator.

Rukh managed to disable the generator, but was attacked by Orrelios, who fought him in the shield generator core. During their fight, Orrelios grabbed Rukh's foot as the Noghri attempted to gain the higher ground, and caught it in wires, crushing them and trapping Rukh's foot in the generator's wiring. As Kallus activated the shield generator, Zeb jumped to safety, but Rukh was stuck and unable to escape as the electric current burst across the generators, much to the Noghri's utter horror. Realizing the shield was up as his bombardment did nothing to the city, Thrawn contacted Rukh for his status, but Orrelios had retrieved Rukh's commlink and laughingly informed Thrawn of the bodyguard's fate amidst the sound of Rukh being fried to death, which then went suddenly silent.

In the Legends timeline, he first appeared as part of the Thrawn Trilogy. During the trilogy, he was the personal agent and lieutenant of Grand Admiral Thrawn and was an agent of the Galactic Empire who aided Thrawn in eliminating his enemies and in reunifying the fractured empire. He first appeared in Heir to the Empire and served in a role of a supporting antagonist throughout the rest of the trilogy until its end.

For his part Gilad Pellaeon despised Thrawn's Noghri bodyguard, who made it a hobby to sneak up on the Imperial officer. Pellaeon hoped to someday talk Thrawn into giving up his Noghri bodyguard, and that if that day were to come Pellaeon was looking forward to having Rukh killed.

When Luke Skywalker escaped a trap set by Thrawn to capture the young Jedi, at Thrawn's orders Rukh executed the crewman at the tractor beam station for incompetence. Thrawn would have Rukh at his side frequently as a warning for individuals as to what could happen should they displease the Grand Admiral.

After Leia Organa Solo exposed the Empire's betrayal of the Noghri to the Clan Dynasts, Akh'laht of Clan Kihm'bar was sent to brief Rukh on what happened. After learning how the Empire had exploited the Noghri for nearly half a century, Rukh became very angry and promised Akh'laht that he would deal with the Grand Admiral at the appropriate time - namely when Thrawn learned that the Noghri had turned against him - even though it was likely a suicide mission.

Rukh continued to play the role of Thrawn's devoted bodyguard. At the Battle of Bilbringi when Thrawn learned that the Emperor's Storehouse on Wayland was under attack by a Noghri force, Rukh chose that moment to strike. He impaled the Grand Admiral with his assassin's knife and incapactitated Pellaeon a few seconds later. After telling Pellaeon that this was for the betrayl of the Noghri by the Empire, he slipped off the bridge and made his way to the hanger bay. There he was intercepted and killed by a stormtrooper detachment led by a clone of Major Grodin Tierce.

Following his death, Rukh was revered by nearly all the Noghri people. (A few Noghri, such as Cakhmaim felt that while Rukh had done a good thing in killing the Grand Admiral, he was not worthy of the accolades given him). The larger galaxy recognized that Rukh's actions had been vital to the survival of the Republic as the Republic could not have won at Bilbrinngi had Thrawn not been killed. 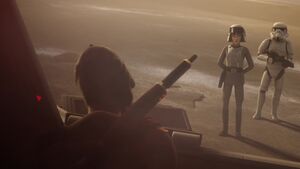 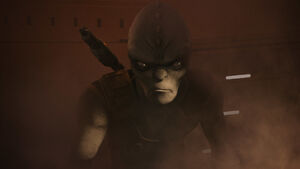 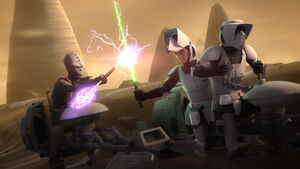 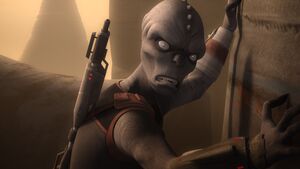 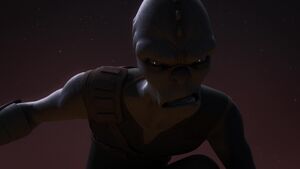 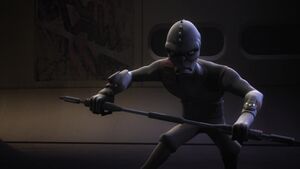 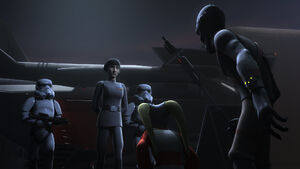 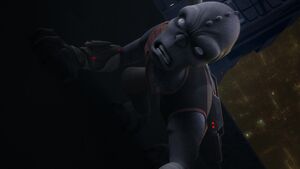 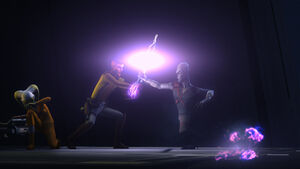 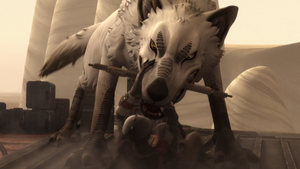 Rukh grapples with the White Loth-wolf. 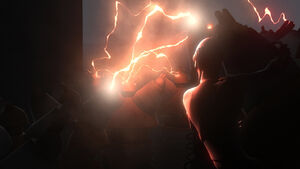 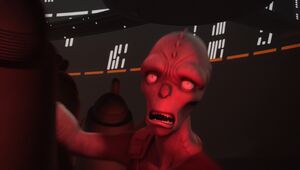