Go to the Soviet Union to "challenge the world's greatest fight fighters" (formerly).

Help Dipper and destroy Robbie for "killing his father" (formerly, almost suceeded)
Defeat Dipper for lying to him (succeeded, but backfired).
Aids the resistance led by Mable and Dipper to save Mystery Shack from Bill Cipher (succeeded).

Rumble McSkirmish (Rudo McGolpes in the Latin America version) is a minor antagonist of the 2012 Disney XD animated series Gravity Falls. He is a fictional fighting videogame character that was brought to life by Dipper Pines by inputting a secret code in an arcade. Rumble first appeared in the episode Fight Fighters as the main antagonist. In Weirdmageddon 3: Take Back The Falls, he returned as a redeemed villain.

He was voiced by Brian Bloom, who also played Black Mask from Batman: Arkham videogame series, and Taskmaster in Marvel's Spider-Man.

Dipper found a secret code on the side of the Fight Fighters arcade. After inputting it, true to the paranormal nature of the town, the arcade flashed in an unexpected radiant light and a voice shouted: "SELECT YOUR CHARACTER!". Dipper mumbled out Rumble's full name as the fighter materialized in front of him; he saw this as an opportunity to have a chance in a fight he had gotten into with his love rival, Robbie. However, it turns back on him when he has to lie to Rumble with the only scenario that sets Rumble off (and quite possibly the only one he seems to understand due to his programming limitations): That Robbie had killed Dipper's father, this sets the pixellated fighter on a rampage in pursue of Robbie until he can "Finish him".

Dipper chases after him and a scared Robbie in an attempt to explain the situation to the videogame character, he finally corners it in the same place he was going to fight Robbie, just before Rumble delivers the finishing blow, Dipper intervenes and admits he had lie to Rumble, knowing that this would mean that he would have to fight him instead. Rumble feels betrayed and dishonored so he challenges Dipper instead, Dipper accepts, even after being told by Soos not to do it as he would get sacked easily. Rumble unleashes a series of videogame themed attacks, Dipper dodges most and even counters at some times but the videogame fighter proves too much for him and ends up getting trashed in a Super Power Ninja Turbo Neo Ultra Hyper Mega Multi Alpha Meta Extra Uber Prefix Combo. After Rumble won he finished off with his catchphrase, "Winners don't lose!" Dipper told him not to bet on it because as soon as he was over with his mission, the mandatory end game GAME OVER screen appeared, which scared him. He grieved his last as he was erased from reality.

He was later seen in "Weirdmageddon Part 1," during Weirdmageddon, when many video game characters in the arcade are released from their games by a rogue weirdness wave. However, when noticing the chaos that the dream demon Bill Cipher has caused, Rumble, along with most of the super natural creatures who opposed Bill's regime, sided with the resistance.

As seen in "Weirdmageddon 3: Take Back The Falls", Rumble, seemingly injured, takes a refugee camp at Mystery Shack, along with a remaining resistance led by Stan, and has gained a different outlook on life, calling himself "Humble McSkirmish". Once Bill Cipher is dead (after Stan sacrifices his memories to kill the dream demon and save the world) Rumble, along with the other super natural resistances who were released into the real world by Bill, are vanishing back to their home world, bidding his allies a farewell by giving them a thumbs up and gaining a 100 points. 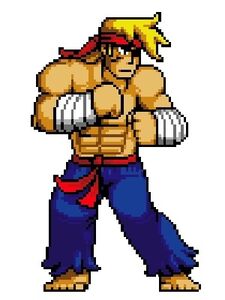 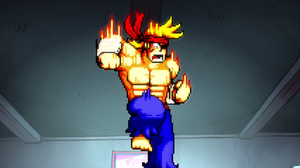 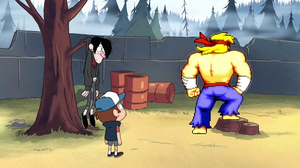 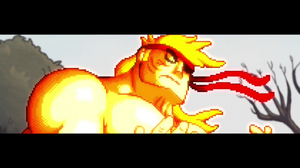 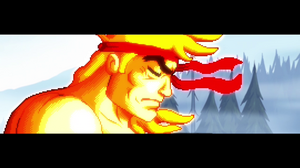 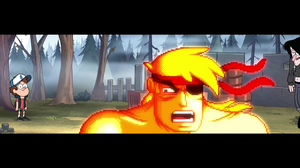 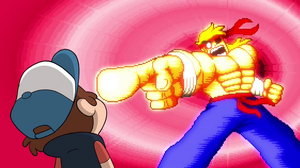