Erase Shrek from existence, so he could take over Far Far Away (failed) .

Rumpelstiltskin is the main antagonist of the Shrek film series. He was a minor antagonist in DreamWorks' 14th full-length animated feature film Shrek the Third and the main antagonist of DreamWorks' 20th full-length animated feature film Shrek Forever After. He is completely different from the fairytale character of the same name. His actual name seems to be "Rumpel Stiltskin", as he was often called "Rumpel" and "Mr. Stiltskin" throughout the film.

He was voiced by Walt Dohrn.

Rumpelstiltskin can be easily described as a cantankerous, ill-tempered, manipulative, traitorous and power-hungry con artist. He will do anything to gain power, as he would even lie to Fiona's parents to get to their throne. He also throws a fit of rage after learning that Shrek rescued the Princess and the King ripped up the contract. Rumplestiltskin is also somewhat compassionate for those even considered his "friends" mainly the witches. However, he does treat his large goose Fifi rather well as he even has his servants give his goose the "royal treatment". He is also a charismatic villain, with a good sense of humor and comical.

Rumpelstilskin become a deal maker thanks to a raccomandation of Re Mida and adopted a pet goose named Fifi who Rumpel always love. Since the beiginning he wad known for being evil, cruel and manipulative.

Later, after the events of the first three films, Rumpel discovered Shrek is feeling frustrated that he is no longer feared as an ogre during his kids' birthday party. Rumpel later gives Shrek a ride in his carriage and then tricks him into signing a paper that will let him be a real ogre like he used to be for a day in exchange for one other day from his past being erased, specifically a day he doesn't remember. However, the day in question was actually the day Shrek was born, meaning he never existed and Rumpelstiltskin became the ruler of Far Far Away and terrorizes the people with an army of witches that hunt ogres. He has also enslaved some of Shrek's friends. When Shrek is brought to the castle, he demands that Rumpel explain what he has done. Rumpel makes Shrek realize that he tricked him into erasing his own existence before then revealing that when the 24 hours of the day are up, the results of the deal will become permanent and Shrek will fade into non-existence forever. Rumpel got his witches to attack Shrek, but the ogre managed to escape the castle with Donkey, who is one of Rumpel's slaves.

Later Shrek and Donkey learn that the contract will become void and Shrek will be saved if he and Fiona kiss before it's too late and later find Fiona with an ogre resistance, Rumpel tells his witches that they must bring Shrek back soon he can't get his life back. He hires the Pied Piper to bring Shrek back to the castle with the other ogres. After Piper tells Rumpel that he failed to bring Shrek back, but captured all the other ogres, As a last resort, Rumple offers a new deal, the "Deal of a Lifetime" as he calls it to whoever turns Shrek in.

After a warrior Gingy tells Shrek about this, Shrek turns himself in to get this deal, and in return, Shrek has Rumple free all the other ogres. Rumple then has Shrek locked in a dungeon. Shrek is surprised to see Fiona locked up there too, however Rumpel explains that Fiona is a princess by day, and therefore not completely an ogre. It is revealed that Rumpel will have Shrek and Fiona fed to Dragon (whom has never met Shrek and is now a villain like in the original film), but Donkey, a fat Puss In Boots, and the ogres arrive and fight Rumpelstiltskin and his witches, Rumple tries to escape on Fifi but Shrek and Fiona, having defeated Dragon, pull her down and defeat Rumple. By this time, the 24 hours are up and Shrek is starting to disappear. Fiona (who now loves Shrek) kisses him before he vanishes completely. Thus, Rumpelstiltskin's world falls apart, and everything is restored to normal.

Rumple is last seen being held prisoner at the aftermath party before the credits, and Fiona kills Fifi by making her explode by singing a high note (similar to the blue bird scene in the first Shrek film). Rumpelstiltskin is also being tormented by the Pied Piper, being forced to dance in his cage.

In Donkey's Caroling Christmas-tacular, Rumpelstiltskin is shown to still be imprisoned in a cage at the swamp, he try to convince Donkey to free him by his cage but fail. Rumpelstilskin is later seen receiving coal for Christmas. It's unknown if Rumpelstilskin will ever escape from the cage.

Despite the fact that he didn't die in Shrek 4, Rumpelstiltskin appears as a zombie in the short Thriller Night.

In the Shrek Forever After soundtrack, which has a story and apparently takes place after the events of the movie, we learn that Rumpelstiltskin now hosts a popular radio show. It's unknown if Rumpelstiltskin has escaped due to this but is not likely because if he could escape he would seek revenge on Shrek. 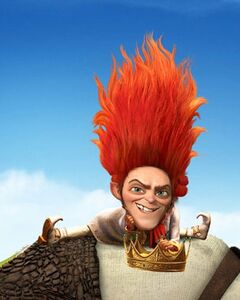 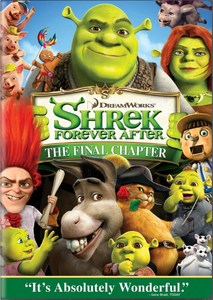 Rumpelstiltskin on the Shrek Forever After DVD.
Add a photo to this gallery

Retrieved from "https://villains.fandom.com/wiki/Rumpelstiltskin_(Shrek)?oldid=2768976"
Community content is available under CC-BY-SA unless otherwise noted.