Villains Wiki
Register
Don't have an account?
Sign In
Advertisement
in: Once Upon a Time Villains, Peter Pan Villains, Fantasy Villains,
and 94 more
English

Rumplestiltskin (Once Upon a Time)

The Dark One
The Beast (himself, Maurice, and Gaston)
The Crocodile (by Captain Hook)
Rumple
Son (by his parents)
Papa/Father (by Baelfire/Neal and Gideon)
Grandpa/Grandfather (by Henry)
The Weaver

As Rumplestiltskin: Deal-maker and sorcerer

As Mr. Gold: Lawyer and pawnbroker
As Weaver: Detective

Rumplestiltskin, also known as the Dark One, Mr. Gold in Storybrooke, and the Weaver in Hyperion Heights, is the central antagonist of the series Once Upon a Time.

Rumplestiltskin is one of the most feared beings in The Enchanted Forest and is notorious for his deals. He is the overall main antagonist of the series due to having set the events of the Curse in motion in the first place.

Rumplestiltskin is based on the titular character from the fairytale Rumpelstiltskin and takes the place of the Beast from Beauty and the Beast and the Crocodile from Peter Pan.

He is portrayed by Robert Carlyle, who also portrayed Francis Begbie in Trainspotting, Albie Kinsella in Cracker, Durza in Eragon, Dracula in Castlevania, Renard in The World is Not Enough, and Adolf Hitler in Hitler Rise of Evil.

The role of Rumplestiltskin was given to Robert Carlyle; it was written with Carlyle in mind, though the writers initially thought he would never accept the part. Horowitz recalled Carlyle's prison sequence, which was the actor's first day on the set as "mind-blowing...You could see Ginny actually jump, the first time he did that character. It was fantastic!"

Rumplestiltskin's love towards his son, and his family in general, is one of the most important traits of his personality and the largest, if not the sole motivation of his life. When he thinks that the pirate Killian Jones took Milah prisoner, Rumplestiltskin tried to intercede for the life of his wife, mainly due to the fact that he believes Baelfire needs his mother. Being lame, Rumplestiltskin has only two options: die at the hands of Captain Jones and his band of pirates, leaving Baelfire an orphan or go back, once again branded as a coward, but secure in the fact that his son is not an orphan.

When a new war of the ogres, the army of the Duke begins to send the children of the kingdom in battle. Ignoring the official propaganda that is noble and brave to give his life for the country, Rumplestiltskin understand that to fight is to die, and there is no honor in sacrifice. At this point in his life, Rumplestiltskin is scared and desperate, but willing to do what is necessary to save Baelfire and, following this instinct, Rumplestiltskin, alone, attacked the duke's castle and steals a magical dagger that allows him to kill the Dark One and gain his powers.

During the early days of the Dark One, Rumplestiltskin is quite consistent with his original personality but soon changes, showing others the cruelty that he himself has suffered, using his power with arrogance and pride. (Even if you saved and brought the kids home from the war of ogres is implied that he did so only because he had promised to his son). He says all he really wants is happiness and security for Baelfire but when Baelfire got a magic bean that can take them to an alternate world free of the curse of the Dark One, Rumplestiltskin is unable to abandon his powers and accidentally leaves Baelfire in another world.

After the departure of Baelfire, Rumplestiltskin gets incredibly ruthless, lonely and vindictive. In this period he continues to amass wealth and property in an attempt to get away from his old life. However, Rumplestiltskin still regreted his actions against Baelfire and this regret got louder until it becomes an obsession that leads him to extreme acts in order to reunite with him. Over the years, Rumplestiltskin acquires a fearsome reputation as one that is inevitable agreements, without worrying too much about the consequences they have on others but more selfishly worrying to get what he wants. Although ruthless in its agreements, Rumplestiltskin warns anyone who wants to make a deal to be cautious, because there is no way out.

Rumplestiltskin is patient, as shown when he is willing to wait until he has everything he need to create and to break the curse. He knew that eventually, his plans and machinations will come into fruition, having acquired the power to glimpse the future during the course of his long life granted by his immortality. But Rumplestiltskin is still alone, turning to his spinning wheel for comfort, a recluse in a huge castle, until Belle enters his life. He acquired her as part of a deal to save her kingdom from Ogres that he agreed to enact on the condition that Belle becomes his maid. After meeting her even though her brain reminds him that he is essentially unlovable, dark soul, a beast, his heart still yearns for love.

What happened next was something that not even he, with all his infinite cunning and powers of foresight could ever have foreseen; Belle's innocence and belief that there is still good in him, began to wane down his defenses, giving him the opportunity to love another again. Unfortunately, his prized apprentice, Regina, with whom Rumple has a rather strained relationship, learned of the growing affection between Rumple and Belle and formulated a plan to strip the sorcerer of his powers by having Belle give him True Love's Kiss.

Of course, Belle's intention was to bring Rumpelstiltskin back into the man he once was, but he saw otherwise, believing her to have conspired together with Regina to rob him of his powers, despite Belle arguing that her love for him is real. And even as he casts Belle from his house, believing that one day she despise him, he mourns his loss. After the departure of Belle (and presumed death), Rumplestiltskin puts his plan in motion, and it is in this period, which encourages Rumplestiltskin, making offers to buy the ingredients of true love from him and Snow White.

In Storybrooke, his counterpart, Mr. Gold has an influence that seems to know no bounds. From real estate to politics and even in the personal lives of his neighbors, the knowledge and involvement of Gold is virtually endless and the citizens of Storybrooke actually appear to be more intimidated by him than they are to the Queen. Always fresh and dressed with a touch of sartorial cosmopolitan, Mr. Gold exudes the kind of confidence that only comes from knowing you are the master of your domain. Mr. Gold also owns and operates the local pawnshop, where numerous objects of the Enchanted Forest, and where he spends most of his days taking care of the various items he has collected over the years and do business with the inhabitants.

He walks assisted by a cane, a remnant of his self-injury, a reminder of why he beat the curse, and the goal of his life. Mr. Gold, however, is still afraid of his impotence and sends Emma to recover the true love potion so he can unleash the most powerful magic of all of Storybrooke through the enchanted well and regain his powers. Over time, Mr. Gold is changed from his family and his relationship with Belle. His only constant is that he will do anything for his family; he is fiercely loyal, but also slow to forget the injustices done to him. All he wanted his whole life is family and the love and the tragedy of Rumplestiltskin is essential that he has not been able to get any of these for a long time.

Mr. Gold is a give and take relationship with Regina Mills, and he helps her by planting the idea in her head that tries to destroy Mary Margaret as she poses as a murderess. He found Henry for Regina to take, but he is not always on her side. After Emma arrives, just as he had predicted, he helps her to gain acceptance as the sheriff in town and he refuses to help Regina when she goes to him for help in destroying Emma.

Following the casting of another curse, Rumplestiltskin is transported to Hyperion Heights in Seattle, where he takes on a new identity of a detective named Weaver.

As a child, Rumplestiltskin, had a round face with soft, features, light-brown hair that appear blond to light, a bulbous nose, hazel eyes and a slender build. As an adult, in his middle age, Rumplestiltskin, has a slender build, but not as weak as may seem his hair becomes darker and lose the blonde highlights, his features became more pronounced as well as his nose, his eyes appear sunken in the orbits and show the hairs typical of an adult. His overall appearance as an adult can be described as "skinny."

As the Dark One, Rumplestiltskin preserves the appearance that he had as an adult human being, but as a result of the power he acquired his skin takes on a golden reflection that, epending on the brightness of the light around him, may appear as green or gray, his eyes dilate and become amber, her teeth rotten appearing yellow, his hair take on a reddish tinge and is disheveled and finally his nails become black. After the Dark Curse, Mr. Gold is restored to his human form and the only differences are evident in his hair, which become partly gray, and his teeth, which appear much more carefully than they were before. Mr. Gold later cuts his hair short and it becomes silvery grey.

Dark One's powers: After killing Zozo, Rumplestiltskin acquired all the powers of the Darkness, making him an extremely powerful person.

Knowledge of Magic: Rumpelstiltskin has been shown to be extremely knowledgeable on the topic of magic, rivaling that of Merlin and Hades, and surpassing that of his students (Cora, Regina and Zelena). He is also the most knowledgeable practitioner on Dark Magic surpassing that of than any other sorcerer (with the possible exception of his mother, the Black Fairy); having instantly become a master of dark magic through the power so of the Dark One and furthering his magical expertise over his two centuries of living. 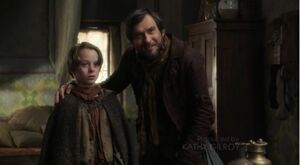 Rumplestiltskin as a child with his father Malcolm (who would later become Peter Pan). 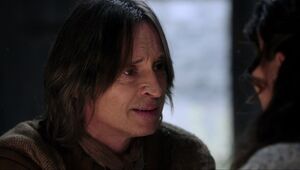 Rumplestiltskin before he became the Dark One. 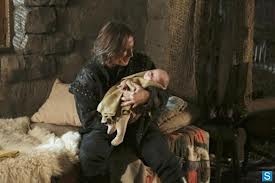 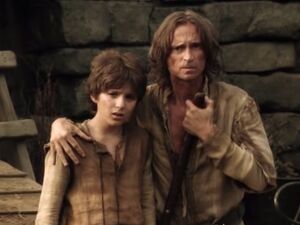 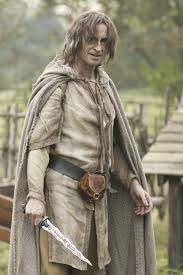 Rumplestiltskin after becoming the Dark One. 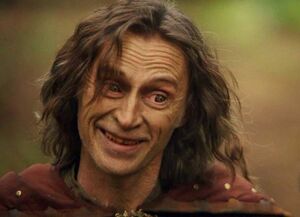 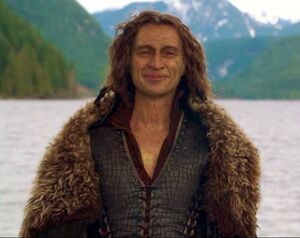 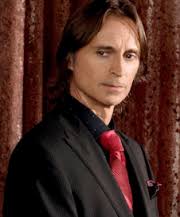 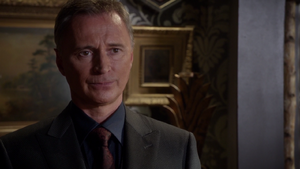