Dante Ramon, better known as Rupture, is a villain in the second season of The Flash. He is a meta-human from Earth-2 and is hunting Cisco Ramon, believing that he is the one responsible for the death of his brother Reverb.

Rupture was a meta-human from Earth-2 and an ally of Zoom. After deciding to conquer Earth-1, Zoom brings more of his meta-human allies over, including Rupture. To ensure Rupture's loyalty Zoom lied to him about the fate of his brother Reverb, claiming that Cisco was the one to kill Reverb.

Through his vibes, Cisco sees the face of his brothers and decides to meet him to check whether he's okay. During the meeting both are attacked by Rupture, who reveals that he has come to settle a debt with Cisco. Cisco claims that Rupture must mistake him for someone else but Rupture claims that he has come to the right person, as he blames Cisco for the death of his brother Reverb. He removes his mask for a moment, frightening Dante who is looking at his own face. He then uses his energy scythe to attack the two but is temporarily stopped when Cisco drives backwards and knocks Rupture off his feet. Cisco uses the oppurtunity to flee and return to S.T.A.R. Labs.

After Cisco escapes, Rupture returns to the police precinct where Zoom has made his base. Rupture reveals to Zoom that he failed to kill Cisco. He plans to set out again, but Zoom forbids it, instead sending him to Jitters where the remaining police officers have withdrawn to. When Rupture arrives, Barry and his team try to distract him with a Flash-hologram. The hologram distracts Rupture enough for the policemen to stun and disarm him. When news of Rupture's failure reach Zoom he sets out to Jitter's himself and kills every officer except Singh and Joe in front of a live cam. He then murders Rupture for his failure before setting off again. 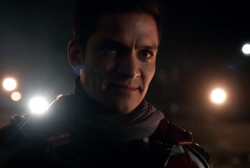 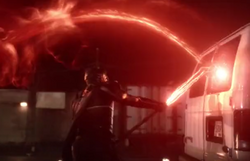 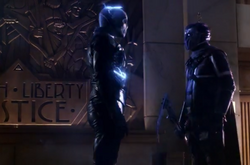 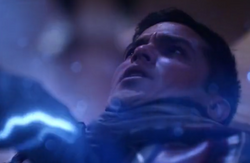