Gambling his customer out of their money.

Ruretta Gerou is a frog-themed Gangler Monster and a minor antagonist in the first episode of the 2018 TV series Kaitou Sentai Lupinranger VS Keisatsu Sentai Patranger and he is one of the four antagonist alongside Garatt Nargo, Namero Bacho and Rabroom Jaws. He is also equipped with a 6-sided dice-like treasure called Comme un cube qui roule.

He made its debut disguise as a casino owner alongside a couple of Porderman (who are disguised as his personal security guards) was playing a game of roulette with one of his customers.

After one of his customers lost the game Ruretta orders one of the guards to send the customer away, however not before long a group of Lupinrangers crashed into the Casino and using a calling card to reveal Ruretta's true form he order his men to attack the thieves.

But once Kairi used a red jet on his Gangler's safe (which his password is 2-0-7) got out the Comme un cube qui roule (which translate as "Like a rolling cube") dice and this made Ruretta very mad, because without that treasure in his safe he would never use his probability manipulation anytime soon.

So he'd tossed out a couple of bombs at the masked individuals, but once the smoked cleared out the Lupinrangers revealed their rangers form the battle commenced after that Ruretta was then destroyed by the Lupinrangers. 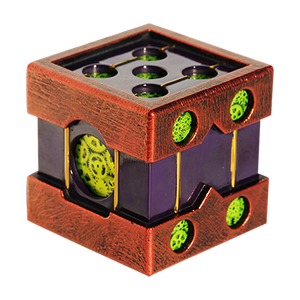