Sexually harassing the public to dissect her.
Sneaking into morgue rooms in hospitals and medical schools.
Trespassing homes.

Be dissected (failed at life, succeeded at death).

Ruriko Tamiya is the main antagonist of Junji Ito's Dissection Girl. She is a deranged and perverted masochist who is sexually stimulated by the thought of herself being dissected as she sexually harasses strangers and her childhood friend Tatsuro, who is unaware of the horrors that lie within Ruriko's body.

Tatsuro Kamata is a medical student and an aspiring surgeon whose class has been assigned to dissect a human body. He opens the body bag containing their specimen, and sees that the corpse is a beautiful woman who looks like she could still be alive. To his shock, she blinks. His professor examines the woman and confirms that she is alive. She wakes up, and cheerfully demands that the class dissect her. She runs away when the professor says he's going to call the police. Tatsuro realizes that he recognizes her.

Later, Tatsuro's classmates talk about the mysterious woman. She is known to have pulled the same stunt at other medical schools, posing as a corpse and trying to get the students to dissect her. It is also rumored that she lurks on street corners and asks passing strangers to cut her up. Tatsuro ponders why the woman looks so familiar to him, and at last remembers her name: Ruriko Tamiya.

Tatsuro knew Ruriko as a child, and she convinced him to steal a scalpel from the hospital where his father (also a doctor) worked. Ruriko took the scalpel for herself and began to cut open small animals, forcing Tatsuro to help her. She blackmailed him by threatening to report him for stealing the scalpel. Tatsuro's friends confronted him and told him that the whole school knew what he had been doing. The other kids began to call him "Dissection Boy" and Ruriko "Dissection Girl." Ruriko subsequently announced that she wanted to move on to dissecting larger animals, as she was bored with frogs and rodents. When Tatsuro refused to help her, she decided to kill and dissect him. She chased him, but collapsed with stomach pain, enabling him to escape. Tatsuro never saw her again until today, eight years later.

As Tatsuro is walking home, Ruriko approaches him. She asks him to dissect her, and he runs away from her. However, when he arrives home, Ruriko is waiting for him in his bed. She is sorry for what she did to him; but claims he was just as cruel as she, and it wasn't fair of him to leave her in pain. Her obsession with dissection has escalated to the point where she herself now wants to be dissected alive. She begs Tatsuro to cut her open because he was her first crush and, as a medical student, he'll do a perfect job. Tatsuro refuses. Ruriko gets out of bed and he sees that something is writhing around inside her stomach underneath her skin. He runs away in horror.

The following day, Tatsuro's class moves on to dissecting the internal organs. One of his classmates reports seeing Ruriko's photo on a dating site where she had placed an advert looking for a guy to dissect her. Tatsuro feels weak and shaky, and has to leave the class. That evening he hears on the news that a man was arrested for attacking Ruriko with a knife after she asked him to dissect her. She was taken to hospital and received life-saving surgery, but escaped shortly afterwards. Ruriko is now wanted by police in connection with her breaking into the dissection lab at the hospital where Tatsuro's studying. Tatsuro later hears rumors that the man who cut up Ruriko went insane, as did the doctors who operated on her. He wonders whether he'll ever see her again.

Twenty years later, Tatsuro is now a professor at the same medical school where he studied. He is leading his class in dissection of a body. One of his students calls his attention to the body of a woman covered in stitches and scars; it's Ruriko. This time, it looks like she's really dead. Tatsuro is sad for her but glad that she will never again be able to harm anyone. When his students cut her open they scream in horror, seeing that her insides are a mass of living flesh, fur and organs from the animals she had dissected. Ruriko smiles in death.

Ruriko is nothing more than a perverted sicko whose only sole purpose in life and even death is to be dissected out of sexual gratification and not to mention she is completely insane. She is also shameless in her actions by showing up nude in public and even in front of her childhood friend, Tatsura as she sexually moans and yells in excitement for Tatsuro to dissect her, much to his horror. Regardless of her repulsiveness, she seems to have a bit of sympathy as she sincerely apologized to Tatsuro for being mean to him as a child even though she feels no remorse for actions of dissecting animals in the past, as according to her, she was only doing it for her fascination on dissection. It is also hinted that she may have dissected unwilling people herself before developing her own twisted sexual desire to be dissected. 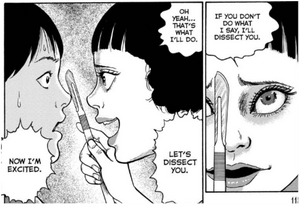 Ruriko and Tatsuro as children. 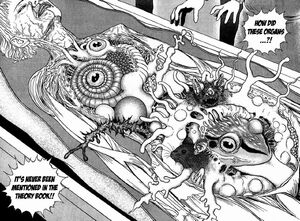 Tatsuro and his students horrifying discovery upon dissecting Ruriko. 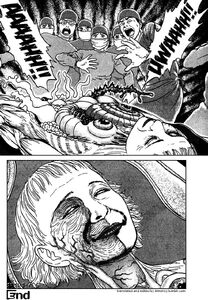 A deceased Ruriko smiling in satisfaction upon being dissected at last.
Add a photo to this gallery

Retrieved from "https://villains.fandom.com/wiki/Ruriko_Tamiya?oldid=3847948"
Community content is available under CC-BY-SA unless otherwise noted.