Kill the five protagonists of Jumanji (both failed).

Professor Van Pelt is the main antagonist of the 2017 film Jumanji: Welcome to the Jungle. He appears as a reimagined version of the original Van Pelt from the 1995 Jumanji film. This version of Van Pelt is much younger and a ruthless mercenary who will stop at nothing to get the Jaguar's Eye jewel and kill the five game protagonists. Depending on the region in which the film is watched, Van Pelt has a different first name. In the international version of the film, the character's first name is given as "John Hardin", while in the US version of the film, the character is provided the first name "Russell".[3][4]

He was portrayed by Bobby Cannavale, who also played Irving in Mr. Robot, Gyp Rosetti in Boardwalk Empire, James Kent in Paul Blart: Mall Cop, and Guy Danlily in Annie.

Van Pelt is a creation of the cursed game Jumanji who exists as one of the threats to its players. In the "Jumanji" video game, Professor Van Pelt is a corrupt explorer seeking to steal the Jaguar's Eye jewel for himself.

In the backstory of the game, Van Pelt lead a group of mercenaries and the NPC (non-playable character) Nigel in the search for the Jaguar's Eye, which he had a great obsession with. Van Pelt succeeded in retrieving the Jewel from the Jaguar statue, and, as a result, was possessed by the Jewel's power and gained the ability to control Jumanji's wildlife, while also bringing a curse upon the land. That night, Nigel succeeded in stealing the Jewel from Van Pelt in an attempt to return it, although Van Pelt's pet vulture altered him to the theft, and Van Pelt ordered his henchmen and the wildlife to retrieve the Jewel and kill anyone standing in their way. Nigel subsequently gives the Jaguar's Eye to individuals sucked into the game, who assume the identities of the game's protagonists, and tasks them with returning the Jaguar's Eye to its statue.

However, the quartet escape with the aid of Alex Vreeke, who had been trapped in the game for 20 years and assumed the identity of protagonist Seaplane McDonough. Back at the marketplace, one of Van Pelt's henchmen informs his boss of the protagonist's escape, and, as a result, Van Pelt ensures him that he will not fail him again, killing him with a scorpion.

Van Pelt eventually confronts the group again when they reach the statue that the Jaguar's Eye belongs to. He takes Bethany hostage and threatens to kill her if Spencer does not give him the jewel, only to discover that the jewel is in Fridge's possession. Distracted, Bethany attacks him and escapes.

Martha then captures the Jaguar's Eye, prompting Van Pelt to corner her. However, Martha allows herself to be bitten by a snake and then gives the jewel to Spencer when she respawns. Once Spencer returns the Jaguar's Eye to its statue and the five protagonists shout "Jumanji" to complete the game, Van Pelt disintegrates, leaving behind a group of rats and other small animals behind that scatter. Once that Spencer, Fridge, Bethany and Martha returned to the real world, they destroyed the Jumanji game cartridge with a bowling ball. Althought Jumanji itself eventually resurfaced, Van Pelt seems to be gone for good. 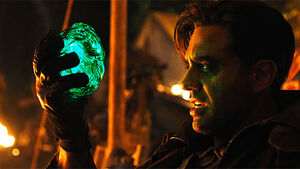 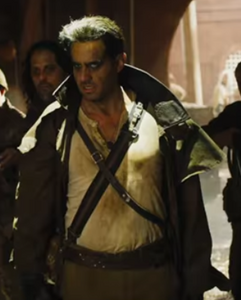 Retrieved from "https://villains.fandom.com/wiki/Russel_Van_Pelt?oldid=3671756"
Community content is available under CC-BY-SA unless otherwise noted.