Villains Wiki
Register
Don't have an account?
Sign In
Advertisement
in: Mature, Male, Call of Duty Villains,
and 48 more

Capture and hunt down Perseus by any means necessary.

He is a CIA Special Officer and spy who was associated in a campaign of clandestine operations across the world since the Vietnam War and leading into the 1980s, all in the hunt for the Soviet agent codenamed Perseus.

He was portrayed by Bruce Thomas in motion capture.

Born in 1937, Adler has become a mystery even to those who have worked by his side for years. His history before joining the CIA in 1959 is known only to a few within Langley; before joining the CIA, he was trained as a Green Beret. In 1967, Adler was assigned to the MACV-SOG unit in Vietnam, investigating covert Soviet activity. There he met and befriended Lawrence Sims, whom he came to trust and is considered one of his favorite cohorts.

After Vietnam, Adler disappeared from CIA records but continued to be affiliated with a number of clandestine operations. He possesses a cold confidence that commands the room. He rarely smiles, but maintains a biting, dry wit. Capable of switching between disarming charisma and emotionless brutality in an instant, Adler enjoys intimidating those around him, and excels at it. His deep knowledge of covert tactics, fluency in Russian and German, and mastery of espionage make him one of the few key operatives that the CIA can consistently rely upon. According to Alex Mason, Adler was present during the battle of Khe Sanh, and presumably met Mason and his team while there.

In 1968, Adler led the raid on Rebirth Island to rescue Friedrich Steiner so they could learn the number codes, but failed after Mason executed the scientist. Adler and Grigori Weaver continued to clear the island, and the former Adler captured the Soviet operative Vikhor Kuzmin, and tortured him for information. Kuzmin only gave his name and rank to him, and Adler stabbed out his eye, which acted as retribution for Lev Kravchenko taking Weaver's eye. Adler and the CIA then left Kuzmin on the island for dead, and Kravchenko found him, and sent him to the gulag for his failure to stop the assault.

During his career with the CIA, Adler worked with other agents from other countries, such as MI6 agent Helen Park when she was assigned to protect two British scientists. Adler was a key figure in a program that the CIA and British intelligence were working together on, and Park worked on expanding the program's development. Adler was also tasked with stopping Perseus, a Soviet spy whom is considered the "Russian Boogeyman" by the United States government. Adler spent nearly three decades trying to eliminate Perseus, and according to Jason Hudson, was close to doing so. By 1981, Adler had presumed Perseus dead, and continued to operate within the CIA, and eventually was titled as "America's Monster".

On January 13, 1981, during a mission with Frank Woods in Turkey, Adler discovered the Soviet agent Perseus became active and four days later Jason Hudson tasked Adler to build a team to track down and eliminate Perseus. During the said mission in Turkey, Adler saved an nearly dead associate of Perseus who was shot by Arash Kadivar, and decided to brainwash him with the MK Ultra Program. The unnamed associate was then given the code name "Bell", and tasked with working with Adler on stopping Perseus from detonating nukes across the west. Adler chooses Alex Mason, Frank Woods, Helen Park, Lawrence Sims, Eleazar "Lazar" Azoulay, and "Bell" on his mission to stop Perseus.

While in the safehouse in Germany, Adler has "Bell" recall "Fracture Jaw", an operation where Adler, "Bell", and Sims were assigned with gathering intel and collecting a nuclear device. During the operation, "Bell" and Sims discover Soviet soldiers at the compound, and collect intel and reunite with Adler on a helicopter. After stopping Viet Cong soldiers attacking a base, their helicopter is shot down, and the trio fight against Viet Cong resistance and call in an air strike. Afterward, Adler and the team decide to go after one of Perseus' associates, Anton Volkov, a Russian mafia boss who heads a ring in Berlin, Germany. Seeing that Volkov is hard to get to, they follow Volkov's chief courier Franz Kraus, and are assisted by BND spy Greta Keller and her informant Lukas Richter. However, Richter is captured by the Stasi and reveals the identity of Keller, resulting in Kraus being informed and returning to his home. After "Bell" and Greta are captured by Kraus, Adler and the team save them as Volkov is cornered and either captured or killed by "Bell".

After the operation in Germany, Adler is tasked with helping "Bell" and Woods escape from the Zakarpatska Oblast, and learns from the latter about Hudson heading an nuclear program called Operation Greenlight. Adler and the team confront Hudson, who reveals that Greenlight is a CIA project that works as a scorched earth policy if the Soviet Union ever invaded the United States. The CIA learn that Perseus is after the sleeper agents that Nikita Dragovich programmed in the 1960s, and Adler sends Mason and Woods to Mount Yamantau to collect the list. Though Mason and Woods succeed in getting the mainframe from the facility, Hudson's superior Emerson Black reveals that Perseus wiped the mainframe. Leaving the only remaining source of information in the KGB headquarters in Moscow, Hudson authorizes Adler to extract the names from the KGB's mainframe with the assistance of the CIA's mole Dimitri Belikov.

Adler assigns "Bell" to join him on the operation, and the two manage to infiltrate into the KGB headquarters and collect the names onto a copy disc. Adler and "Bell" then escape and rescue Belikov, who was exposed as the mole by Anton Charkov or from his computers, and give the intel to the CIA. With the names gathered, Theodore Hastings is considered the sleeper agent that Perseus will re-program, as Hastings worked on Operation Greenlight. The team also gather intel that Perseus is storing the nuke in Cuba and having Hastings arm it, and is also possibly going to receive aid from Fidel Castro.

Adler and the team then go to Havana to stop Hastings from arming the nuke, but learn that the nuke was never there and "Bell" sees Perseus eliminate Hastings on camera. Park and "Bell" go to Hastings, they learn that "Perseus" had him re-programed to give him access to all of the American nukes in Europe, which he will detonate and incriminate the United States. Adler and the team escape from the compound, but Park/Lazar are left behind and killed by Tropas soldiers, as "Bell" is injured and saves one of them or leaves them both behind.

After the incident in Havana, Adler tortures Bell through intracerebral injection in an attempt to forcibly unlock his memories as to where the location of the detonation of the nukes would be. After "Bell" regains his memory with Perseus, Adler reveals that they used the MK ultra program to brainwash "Bell" to help them get to Perseus. Adler then admits that "Bell" probably hates him and the team, but asks them to reveal Perseus' location to prevent the detonation of American nukes.

Should Bell tell the truth, Adler leads a fleet to the Solovetsky Islands and spearheads an assault that dismantles Perseus' network, saving the free world. Adler continues on his mission to bring down Perseus once and for all. To tie off loose ends, Adler takes Bell to a cliffside to kill him, but just as he draws his gun, Bell draws his gun as well. Gunshots sound; the ending is left ambiguous as to if either Adler killed Bell, Bell killed Adler, or they killed each other.

Should Bell lie to Adler about the detonation site of the nukes, Adler and his team are baited to the centre of Duga, an abandoned town. Should Bell not give out any call order for the Soviet ambush, Adler executes Bell, but Perseus still detonates the nukes. Otherwise, the ambush is called. Adler is mortally wounded in the gunfire as his associates (Mason, Woods, and dependent on who Bell chooses to save in Havana, Park or Lazar) are killed. Bell and a masked Soviet soldier corner Adler to a warehouse. Bell either executes him, or reaches for his lighter, to which Adler attacks him with a knife. Bell either loses the struggle, and dies, or Bell overpowers Adler and plunges the knife into his heart. Regardless, the nukes are detonated in Solovetsky, decimating Europe, and completing Perseus' mission.

Adler is mentioned character in Call of Duty: Warzone, and the intel speaks of his investigation of Perseus and his ties with Imran Zakhaev. If the player purchased Call of Duty: Black Ops Cold War, he is available as a playable operative.

In 1984, Adler and his team were assigned to find out who raided the CIA base in West Berlin, and the team then went to the mall at Pines. At the mall, Adler and the team discovered nova 6 gas being contained, and were cornered by Kuzmin and his men. During the firefight, Adler was captured by Kuzmin and transported into a helicopter. By April of the same year, Adler was still a prisoner of Kuzmin and the Perseus spy network, and according to Kapono "Naga" Vang, was being taken to Verdansk. 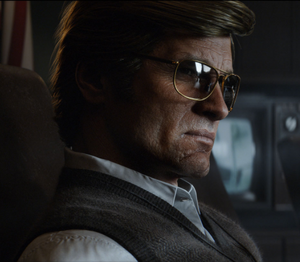 Russell Adler at the briefing. 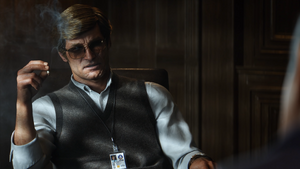 Adler smoking, speaking to James Baker on the Perseus threat. 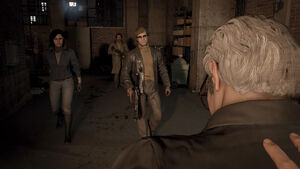 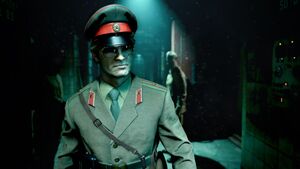 Adler disguised as a Soviet agent to infiltrate the Lubyanka Building. 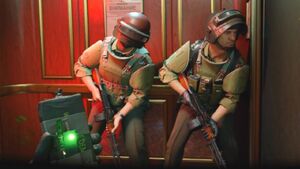 Adler with Bell and Belikov, donning body armor to escape the Lubyanka Building. 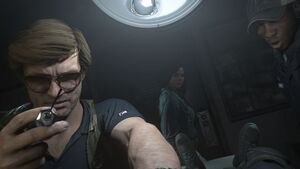 Adler prepares to inject Bell with an intracerebral through the eye. 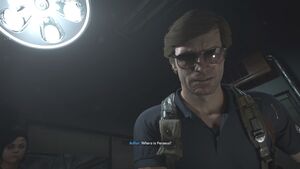 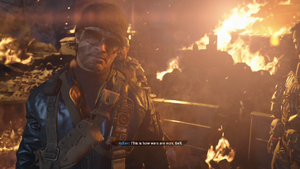 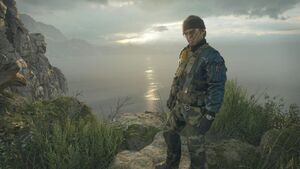 Adler speaking with Bell in the truth ending, moments before trying to execute them (The Final Countdown, canon). 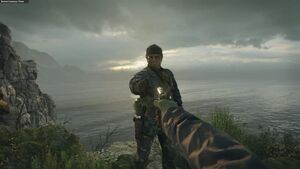 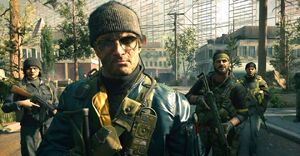 Adler and the team confronting Bell on brining them to Duga-2 (Ashes to Ashes, non-canon). 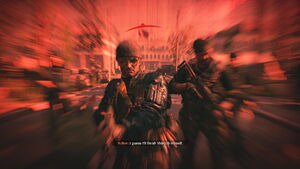 Adler kills Bell if the player brings him and team to Durga (Ashes to Ashes, non-canon). 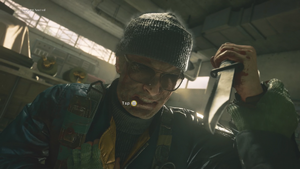 Adler attempts to kill Bell for their treachery (Ashes to Ashes, non-canon). 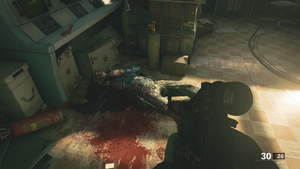 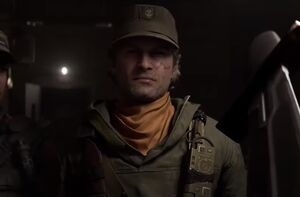 Adler in the season one cinematic.

Adler in the season three cinematic, having been tortured by Stitch.