Head of the U.S. research facility

Working a cure for the infection.
Founding the secrets of immortally.

Obtain immortally for humanity and create a cure for the infection. (failed)

Dr. Russell Barnaby is the overarching antagonist of the Dead Rising series. He was an elderly scientist and head of a U.S. research group and crucial to the Department of Homeland Security. He was also revealed to be responsible for the outbreaks that occurred in Willamette and Santa Cabeza.

He was voiced by Philip Proctor.

Barnaby was the head of a U.S. research team in the Central American town of Santa Cabeza. His team was funded and supported by the U.S government and were tasked by them to mass produce the local livestock to reverse American meat supplies. Barnaby and his team discovered insect species called, Ampulex Compressa Giganteus, utilize the insect's processes to mass produce cattle. However, mass produce project failed when one of the mature wasps, known as a queen, escaped the research facility and went into Santa Cabeza, spreading the parasite.

The U.S. government identified Barnaby's failed project as a critical damage to the country and perverted any rumor about the incident. They largely have the U.S. Special Forces to exterminate all civilian and non-essential survivors in Santa Cabeza as necessary to keep the horrific outbreak from the public. Barnaby and his research team were spared from the execution because of their high ranking positions and knowledge, despite their failures.

After Frank enter into the mall, he sees Barnaby and takes pictures of him in the Entrance Plaza. Barnaby spots Frank and accuses him of being the one who brought him to Willamette, he tries to explain that he had no idea what he's talking about. Shortly after the conversation, the zombies broke into the mall and Barnaby escaped unharmed. Frank meets up and Brad Garrison and Jessica McCarney and assists them to look for Barnaby.

Frank and Brad found Barnaby hiding in a book store called Everyone Luvs Books. Brad tries to convince Barnaby to follow him and Frank to the security room, but he refuses, claiming that he is more safe where he is. Brad decides to head back to the security room for now and get back up for later.

On the next day, Barnaby is capture by Carlito Keyes and seen in the monitors being dragging up from a rope above a group of zombies, Brad heads out to save him. Frank and Brad fought and defeated Carlito and save the unconscious Barnaby. While Frank and Jessica talked about Santa Cabeza, Barnaby overhears them and thought that it was over with. Jessica then interrogates Barnaby about his information on Santa Cabeza. Frank tries to listen to them and while taking pictures in the background, Barnaby notices him and now refuses to speak. Jessica shuts the door on Frank, prompting him to find information elsewhere.

After Frank saves Isabella and brought her back to the security room, Barnaby attacks Jessie. Isabella tells Frank he's turning as Frank kicks him off of Jessie. As Barnaby slowly dying, he maintains his innocence in his connection to the downfall of Santa Cabeza, but confesses about discovering the bees that now carry the zombies virus, before moments later, he reanimates and immediately killed by Brad.

Many years after Dr. Barnaby's death, a vaccine for the parasite hade been found by Isabella Keys. However, an old strain of the parasite appears in Willamette, one that is immune to both the vaccine and Zombrex, starting another outbreak. Dr. Diane Blackburne, Barnaby's old colleague, believes Barnaby's research is the key to Willamette's current outbreak. While looking in Barnaby's lab, Frank finds a machine that was thought to been a cure for the zombie infection, which is later proven true. Frank then finds a video of Calder and his men raiding Barnaby's lab, accessed a log that he made before going to the Willamette mall during the first outbreak in 2006. In the log Barnaby claims he has no idea how the outbreak started and goes on about the true goal of his experiments; that zombies are the key to making humankind immortal. Barnaby also goes on his disappointment about the livestock's failure and the government wants the infection as a biological weapon, also that he has all the evidence stored in a safe place.

He reveals his reason for going to Willamette is to see work in action, but if he was infected he have to go back to his lab and his machine to cure himself. Before ending the log he says he fought to his last breath to protect the human life but only brought death to humanity.

Fontana later reveals that their group was not responsible for the outbreak, but was hired by an unknown client to obtain Calder's data, seeking to use Dr. Barnaby's research on intelligent zombies to make cheap labor for factories and plantations in developing countries. Frank manges to transfer the data from Calder's hard drive into his camera and Vicky manages to save the SD card with the infomation in time before Calder destroyed Frank's camera. Frank West and his partner Vicky Chu, who survives the second outbreak in Willamette, uses the evidence Barnaby gathered to prove the truth about the governments involvements in the outbreaks and Obscuris. With this, true justice is finally served for the massacre of Santa Cabeza. 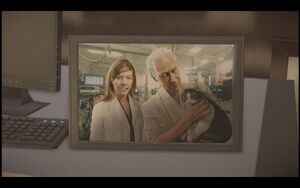 A young Barnaby with his cat Mr. Flamel and Dr. Diane Blackburne in Dead Rising 4. 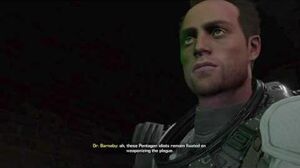