Rustbolt is one of the secondary antagonists of the mobile game Plants vs. Zombies Heroes. He is a mechanically-modified basic zombie who leads Brainy and Hearty classes.

In Rustbolt's introduction comic strips, he was an ordinary basic zombie who was infected by the vending machine that is infected from the Hero-Tron 5000. After he became Rustbolt, he used his Shrink Ray to attack the plants.

In Junkyard Ambush, when Green Shadow, Solar Flare, and Spudow, were looking for a tire to replace Penny's old tire, Rustbolt suddenly attacked the Plant Heroes. They had a battle until Spudow used a giant magnet to weaken him, with Green Shadow and Solar Flare found the tire for Penny.

Rustbolt appeared in The Great Cave Raid alongside Super Brainz and Electric Boogaloo to find a new underground lair until Spudow popped up the ground and attacked them. They fought until Super Brainz used a rope to tie his head to stop him from throwing explosive heads.

In Code Orange! Citron Invades!, Dr. Zomboss ordered Rustbolt, Brain Freeze, and Z-Mech to stop Citron, alongside Rose and Grass Knuckles from putting their flag on the moon. They had a fight until Z-Mech managed to defeat the Plant Heroes by kicking Citron off the moon with Grass Knuckles and Rose.

Rustbolt appeared in Nightcap's introduction comic strips with Immorticia and The Smash attacking a Peashooter, a Sunflower, and a Wall-nut; until Nightcap made his rescue by summoning his mushroom army to fight them back.

Rustbolt's bodysuit is originated from the junkyard. However, one cannot judge its appearance, as the shrink ray can weaken the enemies he targeted. 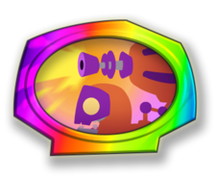 Shrink Ray
Add a photo to this gallery

Retrieved from "https://villains.fandom.com/wiki/Rustbolt?oldid=4145327"
Community content is available under CC-BY-SA unless otherwise noted.