Greedy Outlaws
The Rustlers are antagonists in Pecos Bill, a segment from Disney's tenth full-length animated feature film Melody Time. They are Pecos Bill's former enemies. The Rustlers are slender nor obese men with black or red hair and mustaches, gold teeth, and developing beards.

Their musical vocals were provided by the Sons of the Pioneers.

The rustlers stole Bill's herd of cattle, so Bill lassoes them and gives them a few punches in faces until their gold fillings fly off of their mouths, and that is why there is gold everywhere in the hill. The rustlers (now apparently reformed and have no gold teeth) say "Yippee-yi-yay" along with Bill, Widowmaker, and the now-rescued cattle, who has also got gold teeth in their mouths.

Ninety miles across the desert, Bill and Widowmaker were poor, so they lose their ways while traveling on it. If they don't get any water, they know they have never reached the border. Bill has got a sign and digs the Rio Grande to make water reveal.

Then, while a tribe of Indian playing with different colored paints, Bill starts shooting up their little game. Bill gives them such a shake-up as they jump from their makeup, and that is the way that the Painted Desert got its name. That night, while reclining on a cloud high over Texas with his pistol, Bill makes the stars evaporate. He then sees the stars declining, so he leaves a brightly shining star as the logo of Texas. They are not seen again for the rest of the segment.

The Rustlers are known for being extremely greedy, thieving, scandalous, manipulative, and treacherous. They are very mean, repugnant, objectionable, and traitorous, so they can steal cattle. Despite their evil nature, they are shown to be kind, honest, dependable, straightforward, and praiseworthy, so they can sing a song. 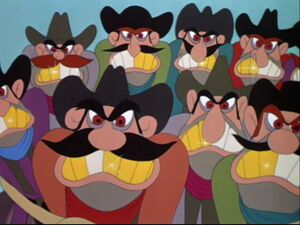 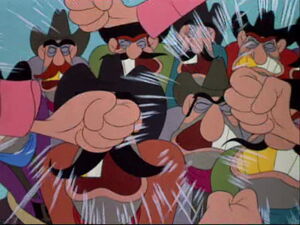 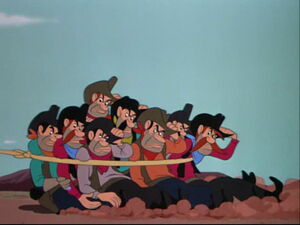 The Rustlers ready to sing. 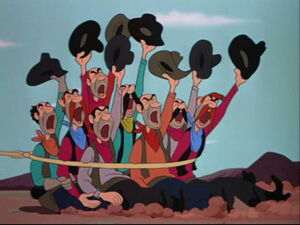