Villains Wiki
Register
Don't have an account?
Sign In
Advertisement
in: Articles under construction, Burglars, Thief,
and 14 more

Steal all of Trask's cows and gold (failed).

The Rustlers serve as the main antagonists of the 4th episode of Joe Camp's short-lived TV series Benji, Zax & the Alien Prince. They are a pair of greedy rustlers who want to steal Trask's cattle and ship.

As Zax, Yubi and Trask fall asleep, Benji hears rustling noises coming from the woods. He comes over to investigate and finds out that it's a rustler. As the rustler approaches Trask's cows, Benji barks at the rustler, scaring him away.

The next day after Benji, Zax and Yubi discover Trask's goldmine, they hear an explosion behind them and realize that the rustlers have broken into the goldmine. As Yubi tries to comfort Trask, Benji and Zax enter the goldmine to scare the rustlers away. Zax uses his lasers to startle the rustlers. While Gerald refused to go further into the mine, the other tried to go in until Zax blew up his flashlight, causing them to flee. The rustlers were never seen again for the rest of the episode. 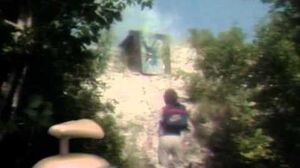