Have her daughter Rose marry Cal Hockley just so she can stay rich (failed).

Ruth DeWitt Bukater is a supporting antagonist of James Cameron's hit 1997 film Titanic. She is the mother of Rose DeWitt Bukater, planning to marry her off to a rich but very spoiled tycoon named Cal Hockley.

She was portrayed by Frances Fisher.

Ruth was very snobby, rude, selfish, strict, egotistical and a control freak, most likely due to the fact that she was consumed by her wealth. After her husband died which left her and Rose penniless, Ruth's gold-digging and acquisitive personality went to the extreme as she wants Cal to marry Rose, so that they could remain wealthy, even forbidding Rose to see Jack Dawson again (despite an annoyed Rose reminding that Jack saved her life earlier). However, she did love and care for Rose as shown when she refused to board a lifeboat without Rose, even shedding tears after seeing the ship slowly sinking down into the ocean with Rose and many other passengers onboard. She also has a disdain for poor people like Jack, also she and her friend the Countess of Rothes single out Molly Brown for being "New Money".

Ruth was born around 1867. Not much else is known about Ruth's early life, but it is known that she was born in Pennsylvania. It is not known who her parents were, but they were most likely first-class, because Ruth inherited much of their wealth. It is also unknown who Ruth's husband was, but it is known that she gave birth to his daughter, Rose DeWitt Bukater. When her husband died when Rose was still a child; Ruth claimed that he left them with nothing but "a legacy of bad debts hidden by a good name". Rose and Ruth did not develop a very good relationship, however; because when Rose was about 16, Ruth forced her into an arranged marriage with Cal for his money.

In 1912, Cal and Rose boarded the Titanic with Ruth and Cal's bodyguard Spicer Lovejoy. Ruth remarked the ship as 'unsinkable' as she boarded on it. She is seen numerous amounts of time throughout the movie pushing Rose around, forbidding her to smoke or giving her a cold glare when she sees her spitting. She even felt so scornful towards Jack Dawson, despite the fact that Jack actually saved Rose from falling off the ship after convincing her out from committing suicide.

At the dinner scene, Ruth exposes Jack as a steerage passenger in hopes of having him shunned by the other first class passengers, though Jack foils this before earning the respect of the other first-class passengers (including Molly Brown) for his heroic deed. The next day, Ruth forbids Rose from seeing Jack again, saying all Rose's father left her when he died was a "list of bad debts hidden by a good name" and that marrying Cal will ensure their status quo as rich people.

Once the ship hit an iceberg, Ruth was reluctant to get on a lifeboat, not realizing what great peril she was in and refusing to care that Jack is being arrested after being framed by Cal and Lovejoy for the theft of the Heart of the Ocean. She said to Rose that she hoped there were first class seats on the lifeboats, so she wouldn't have to sit next to any steerage, believing them to be inferior to her. Rose is angered by this comment, shouting at her mother that half the people on this ship will die since there aren't enough lifeboats to save them, and that she is behaving awfully in the circumstances. When Ruth gets on lifeboat No.6, she is seen to be shocked when Rose angrily refuses to enter the lifeboat and instead leaves to rescue Jack, even spitting at Cal's face when he tried to stop her. Ruth pleads for the officers to wait for Rose, but they ignore her pleas and instead lower the lifeboat into the water, much to Ruth's dismay.

Despite Rose's efforts, Jack succumbed to his death in the cold water along with Lovejoy and many other unfortunate passengers after the ship sank into the ocean. Though Ruth and Cal have survived the disaster, they were both left distraught as they believe that Rose is dead, unaware that Rose herself has been rescued by Officer Harold Lowe and has taken refuge with the steerage. Rose then proceeded to take Jack's surname to live a life for herself while Cal committed suicide after losing his finances to the 1929 Wall Street Crash.

It is unknown what happened to Ruth afterwards as the main story was being told by an elderly Rose in 1996, but it can be assumed that Ruth has been dead for decades.

Ruth about to board the Titanic with Cal, Lovejoy and Rose.

Rose snaps at Ruth for her comments, stating half of the people on the ship are going to die.

Ruth realizing Rose is about to leave her to save Jack. 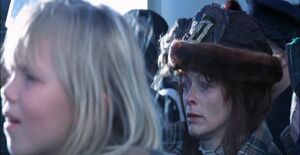 Ruth aboard the Carpathia, upset that she has lost her daughter and her chance to become rich again.