Use the STEM system to live back the life he lost.

Kill Sebastian Castellanos (both failed).
Use Leslie's body to escape STEM (succeeded).
Get his revenge on Mobius Organization for making him a test subject for the STEM (currently, succeed but it was Sebastian and Myra, not him).

Ruvik is a thin, sharp-featured man who is heavily disfigured with various burns and scars, giving him the appearance of a walking cadaver. Seemingly unrestrained by the rules of reality, he is capable of teleportation and invulnerability to the majority of all physical assaults. Fueled in equal parts by a seeming desire for revenge and his own madness, Ruvik torments all those who come into contact with him. He is Sebastian Castellan's first archenemy.

He was voiced by Jackie Earle Haley, best known for his roles as Rorschach in the Watchman movie and Freddy Krueger in the 2010 A Nightmare on Elm Street remake.

Viewed through various flashbacks, it is learned that Ruben Victoriano was a very intellectually gifted, but perhaps mentally unstable child; despite this and notes indicating a strained, though respectful, relationship with his father, he was quite close to his sister, Laura. Ruben lived in a family estate alongside his sister and parents, and his family was known to Doctor Jimenez for their frequent and hefty donations to Beacon Mental Hospital.

At some point a young Ruben met and talked with the doctor, who had discovered the young boy's research facility, and assured the troubled boy that he was no monster, and that he, too had done things some would consider 'distasteful' in the name of progress. Beyond this, his father was evidently involved in a religious organization of some sort, donating to the church frequently and ignoring the various scandals faced by the institution, something that Ruben frowned upon.

While playing in a barn on their family's property, several men approached and set fire to the building as an act of vengeance against their parents, who had evidently been buying and managing large amounts of land in the area. Laura saved Ruben by pushing him through a small window in the barn, but was killed in the flames soon after; Ruben was horrifically burned. His father then took to hiding the disfigured and mentally traumatized Ruben into the basement of the family manor, apparently without Ruben's mother's knowledge of his survival.

She later mentions in a frantic note that despite her husband's assurances that both children died in the blaze, she feels that Ruben is still alive, and claims to hear his cries coming from the basement. Voices heard as well as a diary entry found in the manor later in the game show she grieved quite deeply over the apparent deaths of her two children. Ruben himself was haunted and deeply disturbed over Laura's death as well as the pain and disfigurement he himself suffered as a result of the blaze.

Some time after the loss of Laura, his own terrible burning, and his essential imprisonment at the hands of his father, Ruben eventually killed both of his parents in their bedroom. Taking control of the manor funds, he continued to 'donate' to Beacon Mental Hospital in exchange for test subjects for his various experiments, and at some point took to working directly with Doctor Jimenez. From hence forth seems to be known strictly as 'Ruvik' as opposed to Ruben.

Ruvik continued his experiments on the human psyche and the mind for a great while until coming into conflict with his long-term partner, Jimenez, for the latter having published Ruvik's experiments and findings under his own name. The doctor refuted Ruvik's anger over the matter, revealing that Ruvik, though brilliant, was never formally trained and thus would be unable to ever publish material under his own name. Their relationship becoming more and more strained, Ruvik is eventually betrayed by Doctor Jimenez upon the near completion of their primary project, STEM.

Several men from the MOBIUS organization brought in by the doctor corner and restrain Ruvik, forcing him to become the primary test subject for the STEM—a project meant to unite minds, feelings, consciousness, and so on into one, felt and experienced by all those linked to the machine. Ruvik's brain is manipulated, probed, and sampled in the same ways he had done to his prior test subjects. Recordings made by Ruvik—presumably after this betrayal and the events thereafter—indicate that he suspected Jiminez of planning this betrayal for a good while, as without Jiminez's help, the agents would never have been able to survive Ruvik's various traps.

During the event of the DLC, The Assignment, the leader of MOBIUS called the Administrator wants to use STEM to control mankind while Ruvik just wants to use its to live back his precious time with Laura. Due to result of conflict of interest, the Administrator secretly orders Ruvik termination from his back.

In his mental scape, Ruvik contemplated and searched for a means to escape his imprisonment, eventually finding that the Beacon Mental Hospital patient, and Doctor Jimenez's own patient, Leslie Withers, would somehow be the means to return to the physical world. Records and notes left behind by Ruvik indicate that he was perhaps searching for a brain that he could transfer his consciousness into via the STEM.

Notes from staff at the hospital involved in the STEM program find that those involved with the project—ranging from patients to those working the machine—eventually slip into a coma, and those who attempt to flee find themselves unable to do so. Eventually, though it is never quite shown how, Ruvik managed to manifest himself at Beacon Mental Hospital and massacred those within, including police called on scene, as he searched for Leslie. It is this incident that brings Detective Castellanos and his partners to the scene.

After ambushing Sebastian and several others, he brings them into his own mindscape through the STEM somehow, with the world and all of its terrors that Sebastian is forced to face all a manifestation of Ruvik's own tormented psyche. Though interfering little with Sebastian's progress early on, later chapters find Ruvik making direct contact with the detective, hunting him through the memory of his family's manor. It is here that Ruvik hints that through his connections with Joseph Oda and Sebastian's own mind that he knows full well of Sebastian's own past and motivations.

Remarking that it is unfortunate that Sebastian was involved, he nevertheless states his intentions to make use of the detective for his own means. As Sebastian progresses, Ruvik begins to make himself more and more known, frequently warning the detective through eerie messages to cease his interference, and his intent to make the man suffer. Sebastian is not the only one to come into odds with Ruvik; though it is never seen, it is hinted that Julie has encountered Ruvik before, and knows more about him than she is willing to say, going so far as to realize Ruvik's plans to use Leslie to escape.

At one point, Sebastian is led to the scene of the murders he had initially seen on the screen prior to being ambushed by Ruvik. He confronts Ruvik but is easily disarmed and held in a chokehold. Using his latern, he sets Ruvik aflame similar to his initial burning in the barn all of those years ago, forcing the man to finally drop him, and revealing his weakness to fire.

Eventually, Sebastian and Leslie find themselves in Ruvik's mental version of the STEM, a huge, pulsating brain connected with a variety of tubes and surrounded by an odd liquid. Despite Sebastian's urging, Leslie approaches Ruvik, and is subsequently turned into the same liquid surrounding the mutated STEM. A horrific, giant monster then emerges, with Ruvik seemingly merged into the forehead of the beast as if acting as its brain, and engages Sebastian in a final fight. Eventually impaling Sebastian on a spike, the detective manages to greatly weaken the beast Ruvik had become through a rocket launcher left by a corpse nearby. Ruvik then shifts into the mouth of the creature and attempts to devour Sebastian whole, but a final bullet stops him at last, shoving Sebastian into what appears to be the actual STEM machine room.

Sebastian witnesses one final vision of Ruvik before disconnecting what appears to be Ruvik's own brain from the STEM and then violently stomping on it with his foot, putting an evident end to the man. However, as Sebastian awakes and eventually leaves the hospital, he sees what appears to be Leslie in the distance, walking quietly away. Before Sebastian can react, the world again flickers, and the boy vanishes; whether this was actually Leslie, however, is unknown.

Connection with Leslie evidently sometime before while experimenting with the STEM, Jimenez forced Leslie into contact with Ruvik's mind. Amazingly, the mentally disturbed young man survived the encounter and was even capable of returning to reality. This encounter led Ruvik to realize that Leslie, somehow compatible with Ruvik's own mind, would be the key to his escape of the STEM. Leslie is seemingly both equally terrified yet lured by Ruvik; eventually, Leslie is seen at the steps of the mental Beacon Mental Hospital, oddly calm and composed considering his normal tics and unsure movements. He then finds himself before Ruvik, and appears to give into the man, melting into the liquid surrounding the mental STEM. It is possible that the Leslie seen at the end of the game is either a hallucination, or perhaps an indication that Ruvik's attempts to escape through using Leslie—and Leslie's brain and body—may have been successful after all. Whether this is so or not is left open-ended and unresolved.

With MOBIUS's destruction at the end of The Evil Within 2, his quest is completed and it is unknown what he might doing now or if he survived at all.

Though appearing early on as a ghostly image, Ruvik does not become a direct threat until around Chapter 9, during the exploration of the Manor. During these encounters, the world will take on a cold blue hue, the music will shift, and Ruvik will frequently teleport and walk closer to Sebastian. Coming into contact with his during these scenes results in Ruvik flinging the detective across the building, reducing his health to a sliver. As firearms and any sort of physical attack are useless during these times, it is recommended that one flees from the approaching Ruvik until the color of the world returns to normal.

As a final boss, Ruvik seemingly merges into the skull of a horrific, mutated beast that can easily kill Sebastian with a single swipe of a giant claw. Hunting down the detective, one can only flee until eventually landing on the previously used armored vehicle, in which one must attack specific areas of Ruvik's monstrous body in order to progress and defeat the boss. A well-aimed final bullet puts an end to Ruvik's horror.

Both Sebastian and his wife, Myra, were involved in the investigations of an increasingly large amount of missing person's cases; it is hinted that these people were used in the STEM project after Ruvik's mind was forced into it, including patients at Mental Beacon Hospital such as Leslie. When Myra herself goes missing, she leaves Sebastian several notes indicating that the fire that claimed their daughter was no accident, but perhaps either a warning or direct attempt on their lives for their investigations into the missing people of Krimson City.

It is interesting to note that the two share similar experiences and losses as a result of fire being used as a weapon; Sebastian losing his daughter, and Ruvik losing his sister. 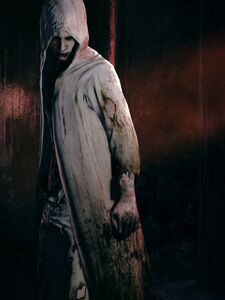 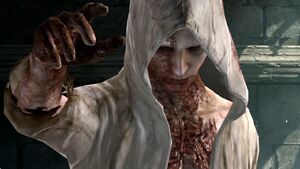 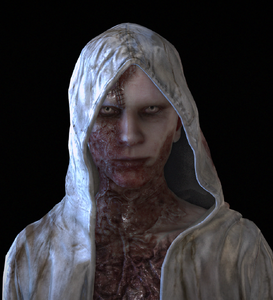 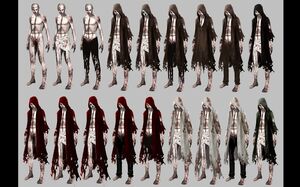 Retrieved from "https://villains.fandom.com/wiki/Ruvik?oldid=4209417"
Community content is available under CC-BY-SA unless otherwise noted.