Luring women to his hot springs

Murder Mirai Sarutobi for her blood

Ryūki is the main antagonist of Konoha Shinden: Steam Ninja Scrolls and its anime adaptation in the Boruto: Naruto Next Generations anime series. He is a worshiper of Jashin who plots to lure women to his hot springs with the false promise of being able to let them see their deceased loved ones again so he can sacrifice them to make himself immortal.

He was voiced by Tomokazu Sugita.

Ryūki is a very charismatic, cruel man who is obsessed with eternal life and will do whatever is necessary to achieve to his goal by tricking and luring innocent women into his hot springs so he can sacrifice them in a ritual to gain immortality. He is heinous, ruthless, evil and incredibly narcissistic as he cares for no one but himself. He hates peace and considers it to be a joke, and also intends to throw the world back into chaos and slaughter.

Many years ago, Ryūki disliked the peace that spread across the entire world after the end of the Fourth Shinobi War, as he feels it makes the countries and it's people soft and weak. To rectify this, Ryūki decided to follow in Hidan's footsteps by becoming immortal, and with that immortality, he would bring death and destruction back to the world and establish himself as it's ruler. In order for Jashin to grant him immortality, he needed to acquire a large number of sacrifices. To that end, Ryūki and his fellow Jashinists began abducting naïve young girls travelling through the mountains of the Land of Hot Water, luring them in by claiming to let them see their deceased loved ones.

Ryūki is first seen welcoming the girls to his hot spring where he promises to grant their wish of letting them see their deceased loved ones again. However when Mirai asked how he's going to do it, he responds by claiming he is going to use a Reanimation Jutsu that does not require a living sacrifice. He then proceeds to ask for their names and who they wish to see where he then dresses them in white robes and has them walk into the steam.

With the girls all gathered together, he then gives them a liquid to drink claiming it to be "holy water". However Mirai manages to see through his lies and stop the other girls from drinking it but he then quickly takes Tatsumi hostage and places a puppet curse on her where he forces her to fight Mirai. Thankfully though Kakashi and Guy arrive and break the curse on Tatsumi.

An angered Ryūki throws his bottle of "holy water" at Mirai only for her to slash it where it emits a steam allowing Ryūki to take off. However Kakashi alerts Mirai of where he is going where she then chases him to his Sacred Ritual Room where he then tries to shoot sharp poles at Mirai so that he can sacrifice her with his puppet curse as he talks about how he hates the era of peace and wishes to bring back the ways of Jashin. However when it first appears as though he succeeded, it is revealed to be a genjutsu created by Mirai.

Despite this, Ryūki is still convinced he is immortal and then launches a whole bunch of poles at Mirai while also trying to attack her himself. Luckily, Mirai manages to stop all of it with her whirlwind fist attack. Ryūki is then immediately arrested. 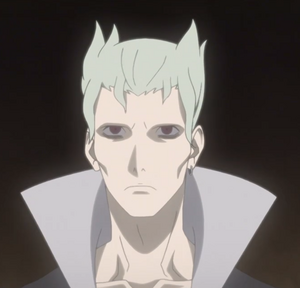 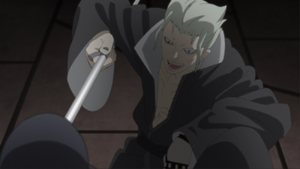 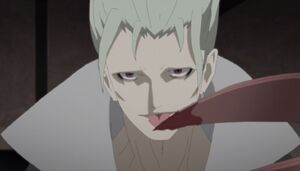