Save himself from death by killing various people to alter the timeline (ultimately failed).

Captain Ryūya Asami (in Japanese: リュウヤ隊長, Ryūya Taichō), also known as Captain Ryūya, is the overarching antagonist of the Japanese TV series Mirai Sentai Timeranger. He was Tatsuya Asami's descendant from the year 3000, the first TimeRed of the future and the original TimeFire as well as original pilot of V-Rex before history was altered.

While the captain of the Time Police and superior of the Timerangers, Ryūya is eventually revealed as the true mastermind behind the plot, having arranged the Londerz Family's escape from prison into the past to ensure his own survival in the future.

He was portrayed by Masaru Nagai, who also played his ancestor Tatsuya Asami in the same series, and later played Saden/Master Black in Kishiryu Sentai Ryusoulger.

In the year 3000, Ryūya is the commanding officer of Time Protection Department, as well as superior of Timerangers. After Don Dolnero and his gang travel to 2000 after escaping from prison, Ryūya sends four cadets, Yuri, Ayase, Domon and Sion, to go after them. However, one of Dolnero's minions, Lila, impersonates captain Ryūya (who deliberately allowed her to take his place), traps them and sets their ship to self-destruct, which they all survive. Shortly after they meet Ryūya's ancestor, Tatsuya Asami, who noticed the explosion and tried to check out what happened. After some misunderstandings they recruited Tatsuya as a member of their group. The whole five unlocked ChronoChangers and became Timerangers. During their stay in the past Tatsuya's rival, Naoto Takizawa, becomes TimeFire.

Later in the series, after Gien's insanity increased and he wanted to control G-Zord, Ryūya traveled to 20th century to destroy it in order to prevent disappearance of 30th century. However, he wanted to keep Gien alive. He also explained that Tatsuya is his ancestor and then took over the role of TimeRed from him. However, after his leadership caused friction within the group, he reluctantly handed ChronoChanger back to Tatsuya. Having no interest in the past, Ryūya insists Timerangers (except Tatsuya) to return to 30th century since the Lambda 2000 intends to cause the Earth in the past to cease to exist. After they return to the future, Ryūya attempts to erased their memories, informing Timerangers that their actions in 2000 changed their futures for better.

However, they manage to escape and Ryūya orders his people to find them and even demands to kill them if necessary. Then Ryūya confronts Ayase who, after brief talk, fights Ryūya and unintentionally shoots him in the stomach, mortally wounding him. The other Timerangers suddenly appear and he reveals to them that he was person responsible for Dolnero's escape to the past and that Timerangers being formed and that Gien's insanity reaching its peak was also planned by him. He reveals that sixth years earlier he saw two completely different futures and wanted the better one come to pass. However Ryūya noticed that in both futures he died as TimeFire. In order to prevent his demise Ryūya set up the V-Rex disappearance to ensure that someone in the past will become TimeFire and die instead of him. After revealing this information, Ryūya died of his wound.

Ryūya was an extremely arrogant, overconfident, selfish, ruthless and manipulative person. He mainly cared about himself and his own good and did not care about others at all. He would not hesitate to kill in order to achieve his goals. He was very a strict leader and hated having his methods and strategies questioned. He was also extremely heartless and immensely callous as he was willing to sacrifice millions (or even billions) of innocent lives in order to save himself from death. Despite claiming that he wants to save the 30th century, he actually doesn't care about it and only wants to save himself. Just before his death it was obvious that he felt no remorse or regret for his actions. 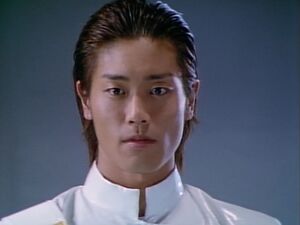 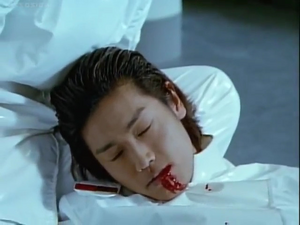