Redeemed Supervillain
Ryan Mitchell, also known as the Titanium Ranger, is an redeemed antagonist in Power Rangers Lightspeed Rescue. He started out as Diabolico's minion, before joining the Lightspeed Rangers.

He was portrayed by Rhett Fisher.

When Ryan was young, he, along with his father and sister, got in a car accident that left them dangling near a cliff side while driving home on a rainy night. As the respectful father, Captain Mitchell held on both, buth his grip on Ryan was weak. Suddenedly, Diabloico warped into the scene and made a offer: he would save the child, but he would raise the child and now allow him to see his family until he was 20 years old. Mitchell first refused, but caved in when his son lost his grip and fell, causing the demon to gladly take the child for himself.

As a child, Diabolico tricked Ryan into thinking his father abandoned him due to him perfering his sister, Dana. Then, he instructed Ryan to swipe the prototype of the Titanium Morpher and kill the other rangers (which, conviently, Dana was a part of.) After nearly beating the other Rangers, but Ms. Fairwheather overwhelmed the young man with the V-Lancers, this also destroying some of his visor, revealing his relationship to Captain Mitchell.

The Power Rangers were about to defeat the man, but before that happened, Captain Mitchell ordered the Rangers to stand down and sent them back to him, as he told his story after Captain Mitchell told the Rangers that Ryan is his son as a reason of why he ordered them not to fire at Ryan. Captain Mitchell tries to confront the kid, but Ryan at first rejects him, but Ryan redeems himself when once again stuck over a cliff face, Ryan remembers his past and returns the Morpher. His father gives him a new Morpher, and he joins the Lightspeed Rangers from then on,  much to Diabolico's fury, who placed a cursed tatoo of a cobra, which would move upward anytime he transformed, being fatal when at his neck. However, Ryan managed to find the cobra and break the curse.

For a while, Ryan left to learn about the demons, giving the Max Solarzord to the team in case they needed help defeating their foes. Eventually, he returns and reveals Queen Bansheera's plot to return the demons, causing him to fight alongside with the Rangers to defeat Bansheera.

He later showed up to fight Vypra with the Lightspeed and Time Force Rangers, and in a army of rangers to defeat The Armada. 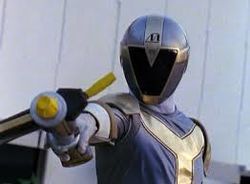 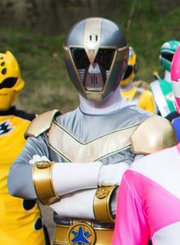 Retrieved from "https://villains.fandom.com/wiki/Ryan_Mitchell?oldid=3786937"
Community content is available under CC-BY-SA unless otherwise noted.