Make money from the drug trafficking.

He was voiced by MC Eiht. "Hood Took Me Under", a song produced by Compton's Most Wanted, including member MC Eiht, is featured on Radio Los Santos and the Grand Theft Auto: San Andreas game soundtrack.

Strongly resembling the late rapper Eazy E by wearing a baseball hat and jheri curl, is a senior member of the Grove Street Families, who lives in a home neighboring the Johnson House and smokes large quantities of marijuana laced with PCP. In an effort to supply the GSF with new firearms and weapons, Ryder calls in CJ to help steal some weaponry from several locations, including the home of a heavily armed war veteran (Colonel Fuhrberger), a forcibly stopped ammunition train and a National Guard weapons depot.

Ryder has delusions of grandeur and a possible Napoleon complex stemming from his small stature. He fancies himself a "genius" and claims that he did not finish school because he was "too intelligent" and not because of his involvement with the GSF. In The Introduction, Big Smoke approaches him with an offer to betray the Grove Street Families in order to break into the drug trade. After little convincing, Ryder accepts.

When CJ returns and begins his rise in the Grove Street Families, Ryder becomes increasingly jealous even though he is already aligned with the Ballas. Cesar takes CJ to witness both Smoke and Ryder emerging from a garage and talking to Officer Tenpenny; a "Green Sabre" car that is involved in the slaying of CJ's mother is inside. It is implied that both Smoke and Ryder were involved in the hit.

After betraying CJ and accelerating the fall of the GSF in Los Santos, Ryder aids Big Smoke in establishing a drug trade with the Loco Syndicate and thus flooding Los Santos with crack cocaine. He later appears in San Fierro. Ryder, T-Bone Mendez and the Ballas meet for a deal. After CJ and Cesar, along with a squad of Triads, riddle T-Bone with bullets on the pier, Ryder runs away and engages Carl in a speedboat chase, which ends in his death. Alternatively, as he swims to the speedboat, he is killed by CJ's sniper rifle.

In an occurrence of foreshadowing, CJ tells Ryder during an early mission, "One day, you're gonna wish you hadn't pissed me off.". It was later revealed by Cesar Vialpando that Ryder tried to have sex with Kendl (this was most likely a lie to make Carl fell good about killing Ryder). Although CJ reacted as an older brother would and should he still seemingly regret having to have killed a life long friend.

Ryder owns a maroon Coupe Utility (an El Camino look-alike referred to in-game as a "Picador") with a license plate reading "SHERM", a slang term for PCP (CJ calls Ryder "sherm-head" throughout the game). Throughout the game, Ryder has a habit of calling CJ a "buster". CJ also mentions that Ryder has been dealing drugs since he was 10, and once beat up a teacher for wearing purple (Ballas colors). 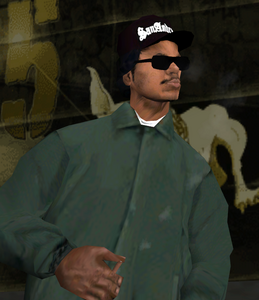 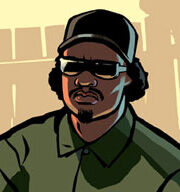 Retrieved from "https://villains.fandom.com/wiki/Ryder_(Grand_Theft_Auto)?oldid=4244944"
Community content is available under CC-BY-SA unless otherwise noted.